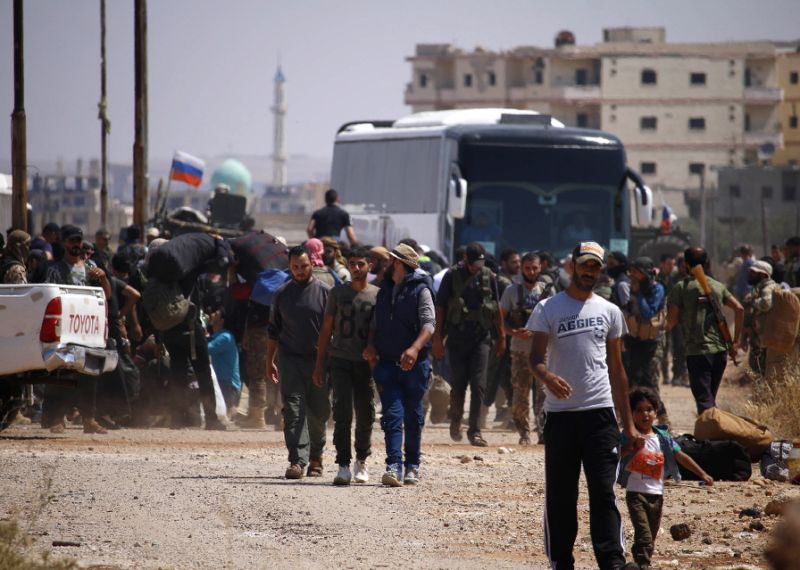 Hundreds of Syrian rebels and their relatives left the southern city of Daraa on Sunday under a deal to bring the “cradle” of the country’s uprising back under government control.

A brutal crackdown paved the way for a full-fledged conflict that has since killed more than 350,000 people and displaced millions.

Just hours after the transfers, Syria accused its longtime enemy Israel of trying to support the rebels by targeting a Syrian army position in the war-ravaged country’s north.  After securing Damascus in May, President Bashar al-Assad turned his attention to rebels in the strategic south, where protests against his rule first erupted in 2011.

Nearly three weeks of bombardment saw beleaguered rebels agree with Russia earlier this month to hand over Daraa province, before reaching a similar deal for its capital this week.

In recent days, rebels have handed heavy-duty arms and equipment to government forces who entered the city’s rebel-held southern districts for the first time in years and raised the national flag.

On Sunday, rebels and civilians who did not want to live under government control were granted safe passage to opposition-held Idlib in Syria’s northwest. Hundreds of fighters and some relatives, carrying suitcases packed with clothes, boarded around 15 buses in Daraa city, AFP’s correspondent there said.

Russian forces searched the vehicles, parked on the main thoroughfare connecting the city’s government-held north with its rebel south before they set off just after midday for Idlib.

“My heart is aching and in pieces. May God recompense us. What more can I say?” said Huzayfa Halawa, a 28-year-old rebel evacuated Sunday.

The official news agency SANA said on Sunday Daraa’s rebels released five male hostages into government custody and also surrendered more heavy and medium weaponry. That would pave the way for the entire city to come under government control in accordance with the handover deal.

A small group of Syrian soldiers took up position in Daraa al-Balad on Sunday, a key rebel-held quarter, said the Syrian Observatory for Human Rights monitor. It said 430 people including civilians and rebels from the city and wider province were evacuated, far fewer than the 1,400 expected to leave.

After securing Damascus in May, President Bashar al-Assad turned his attention to rebels in the strategic south, where protests against his rule first erupted in 2011.

The deal for Daraa city is the latest in a string of such agreements the government has used to retake large parts of the country. They are often brokered by Moscow, and usually, follow ferocious military campaigns and sometimes stifling sieges that effectively force rebels to surrender.

Their terms also typically include the mass transfer of thousands of rebels and civilians to opposition-held Idlib, in what rights groups and activists say may amount to forced displacement.

The government fully regaining Daraa will be a significant blow to the opposition. In 2011, teenagers were arrested for scrawling anti-Assad slogans on a school in the city, sparking mass protests against the government. A brutal crackdown paved the way for a full-fledged conflict that has since killed more than 350,000 people and displaced millions.

Assad has regained much of the territory he lost to rebels, and now comfortably controls more than 60 percent of Syria. In the south, he holds 80 percent of Daraa province but parts of its western countryside and most of the adjacent province of Quneitra still escape his control.

On Sunday, government forces battered Quneitra province with hundreds of missiles and seized the town of Masshara, according to the Observatory. The clashes killed 20 government forces and 17 rebels and allied jihadists, the monitor said.

Air strikes also hit opposition areas in Quneitra that lie within four kilometers (less than three miles) from the sensitive buffer zone with the Israeli-annexed Golan. Late Sunday, a military source accused Israel of bombing a government position in Aleppo province to help rebels in the south.

“The Zionist enemy (Israel)… targeted with its missiles one of our military positions north of the Neirab military airport, but the damage was only material,” the source said, quoted by state news agency SANA.

There was no immediate comment from the Israeli military, which very rarely confirms strikes on Syrian positions.

The Observatory said it had recorded a wave of blasts after a missile attack on and around Neirab on Sunday night, which it said was probably carried out by Israel.  Suspected Israeli air strikes have hit Syrian army positions near Damascus and in central Syria in the past but hitting Aleppo is rarer.

It says its main priority is preventing its archfoe Iran, a key backer of Assad, from building up its military installations in Syria. On Sunday, Hossein Jaberi Ansari, a senior aide in Iran’s foreign ministry, met with Assad in Damascus and hailed Syria’s advances in Daraa, according to the Syrian presidency.

Other countries must fight their own battles against jihadists: Trump