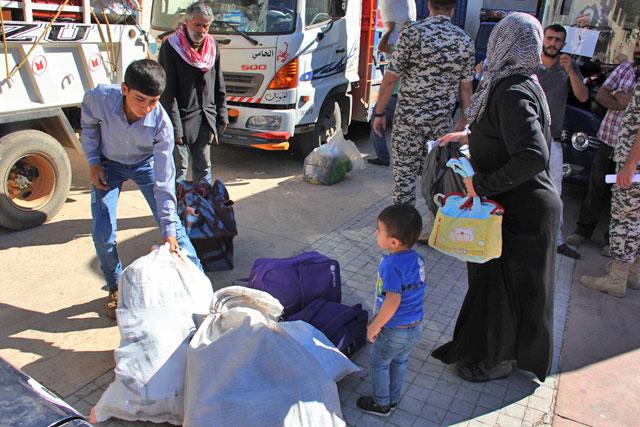 Several years after fleeing Syria, a group of wide-eyed refugees stares through the tinted windows of their bus to see the homecoming committee the government has organized for them. The few dozen people who step off the coach that ended their exile in Lebanon look slightly alarmed by the crowd forming around them and the sight of Russian soldiers supervising their crossing at the Jdeidet Yabus border post.

Doctors are on hand to offer medical assistance, along with a group of volunteers handing out food and drinks. Ayham al-Nassar’s job is to distribute government-subsidized SIM cards to his freshly-returned compatriots. “The refugees are family, we’re all Syrians. We hope for their return now that the situation is quiet,” he says.

The UN’s refugee agency has consistently warned against premature returns and argued that the situation in Syria meant there were not enough guarantees for mass returns.

Nearby, a group of teenagers dressed in blue jackets and waving the national flag chant slogans celebrating Syria’s unity and President Bashar al-Assad. Sporting flawless makeup and snazzy sunglasses, 21-year-old Rama looks more like a student returning from a summer holiday than a refugee tasked with rebuilding her country.

“We’ve been told that the university was rebuilt, now we have to rebuild our village and our homes,” she tells an AFP journalist during a tour of Damascus’s southern outskirts organized by the Syrian government and the Russian military.

Russia, a long-time ally of Syria, launched a military intervention in 2015 to support the embattled regime, a move that changed the course of the war. Assad and his allies have since recovered swathes of territory and the government is turning its attention to post-conflict reconstruction.

“Refugees are returning voluntarily, everything is so quiet now in Syria,” says Ghayth Abdel Rahman, a gynecologist braving the scorching afternoon sun to wait for the bus. “Every Syrian should take part in the reconstruction of the country,” Local Administration Minister Hussein Makhlouf said at a press conference on Monday to mark the refugees’ arrival.

Roueida, who fled from Latakia, a town on the Mediterranean that lies in the heartland of Assad’s Alawite minority, refuses to leave her Swedish exile

“It is their moral duty,” said the official, who also heads a committee formed last week to coordinate refugee returns. The war that erupted in 2011, one of the most devastating conflicts since World War II, has displaced more than half of Syria’s population, including more than five million beyond its borders. Most of them fled to neighboring countries, particularly Turkey, Jordan, and Lebanon.

“Syria’s victory will only be complete once the return of refugees is achieved,” said Makhlouf, purportedly quoting Bashar al-Assad. To achieve that goal, Syria “needs the help of its allies”, Deputy Foreign Minister Faisal Mekdad said at the same ceremony. Russia last month presented the United States with an initiative for the coordinated return of refugees that involves working groups in Lebanon and Jordan.

Moscow’s envoy to Damascus stressed that Syria was currently unable to finance such a huge operation alone. Mekdad stressed, however, that not all refugees would be welcome back to their country. He singled out the Syrian Civil Defence rescue service known as the “White Helmets”, which Damascus accuses of having ties with jihadists and being a Western stooge.

The AFP team and other reporters were also taken to a brand new camp for displaced people south of Damascus, as well as to freshly rebuilt schools and hospitals in nearby Yalda. “Today’s Syria isn’t like yesterday’s Syria,” Mekdad said, stressing that 12 out of the country’s 14 provinces were now under government control. “The government will guarantee a dignified return for refugees,” he added.

Read more: Syrian government urges citizens to return to the country after victory…

Some want to go home, while others are under pressure from their host countries to make the journey but many are still unwilling to return. The UN’s refugee agency has consistently warned against premature returns and argued that the situation in Syria meant there were not enough guarantees for mass returns.

Roueida, who fled from Latakia, a town on the Mediterranean that lies in the heartland of Assad’s Alawite minority, refuses to leave her Swedish exile. “My friends keep telling me to come back, that the country is peaceful, that we will rebuild it together,” she tells AFP by phone. “But it is not my Syria anymore and I don’t trust the government’s promises anymore.”