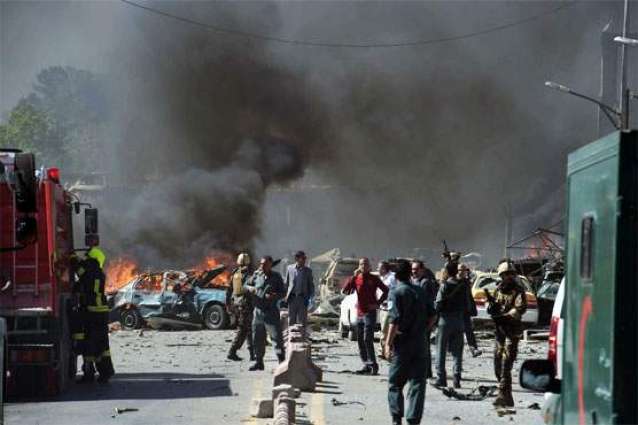 A suicide attacker blew up a bomb-laden vehicle in Kabul on Saturday, killing at least two civilians and wounding several others, an Afghan official said. The Taliban claimed responsibility for the attack as the group comes under growing pressure to take up the Afghan government’s offer of peace talks.

“Around 9:10 am this morning a suicide car bomb exploded in Police District Nine of Kabul,” interior ministry spokesman Najib Danish told AFP. Two civilians were killed and three others were wounded in the attack, Danish said. The blast happened at a time when many people would have been driving to work.

Health ministry spokesman Wahid Majrooh told AFP at least four people had been wounded. Deputy interior ministry spokesman Nasrat Rahimi said the bomber was heading towards global security company G4S but “detonated himself before reaching the target”.
The deadly attack — the latest in a series in the war-weary Afghan capital — comes days after the top US general in Afghanistan said protecting the city was a priority for foreign forces.

“Kabul is our main effort right now, to harden Kabul, to protect the people of Kabul and the international community that are here because of the strategic impact that has and the importance to the campaign,” General John Nicholson, told reporters on Wednesday.
The Taliban and its smaller rival Islamic State group have been dialing up the pressure on Kabul, launching a series of devastating attacks in recent months.

The most recent was on March 9 when a suicide bomber blew himself up in a Shiite area of the city, killing at least nine people. IS claimed responsibility.  Saturday’s assault comes amid growing pressure on the Taliban to accept the Afghan government’s offer of peace talks to end the 16-year conflict.

So far the Taliban has given only a muted response to President Ashraf Ghani’s proposal last month, which also called for a ceasefire after which the group could become a political party. Analysts said the Taliban leadership has been debating the merits of engaging with a government that the group has long viewed as illegitimate.

But it appears to have few reasons to negotiate. The Taliban has been resurgent since the withdrawal of US-led NATO combat troops at the end of 2014, taking back territory and devastating Afghanistan’s beleaguered security forces.

Read more: Reactions and repercussions of the Kabul attack

In October, insurgents controlled or influenced nearly half of Afghanistan’s districts — double the percentage in 2015, the US government’s office of the Special Inspector General for Afghanistan Reconstruction said in January.

Over the same period, the watchdog said, the number of districts under Afghan government control or influence fell to its lowest level since December 2015.

IMF calls for ‘urgent’ action by India amid slowdown

Turkey’s lira crisis: How bad can it get?

US at it again: Demonizing Iran to further its own agenda?

Ethiopian Airlines crash: What is the MCAS system on the Boeing 737 Max 8?