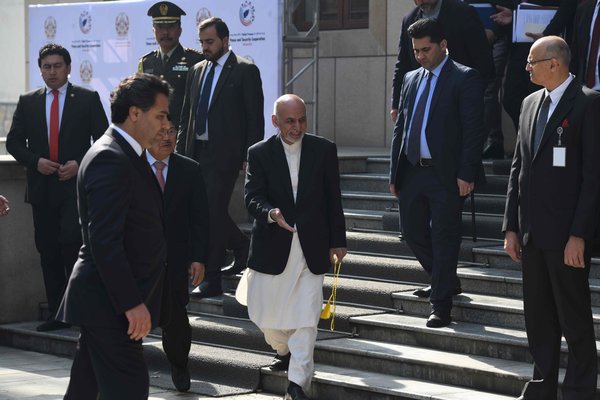 The United States for the first time has confirmed on Wednesday (today) that its envoy is meeting in Qatar with the Taliban, seeking to negotiate an end to the Afghanistan war despite a new major attack claimed by the insurgents.

The Afghan Defense ministry issued a statement that the heavily armed Humvee was manufactured in the US, and it had been captured by Taliban from the Afghan military personnel to make it easier to “breach the military stronghold”.

It appears that the Taliban have succeeded in maintaining the gridlock over the participation of the Ghani-led government in their negotiations with the US, alongside exerting pressure with a series of barbaric attacks on Afghan military bases and government institutions.

Zabihullah Mujahid, a spokesperson of the Afghan Taliban, issued a statement to announce the talks and stated that the two sides have come to an “agreement on a two-point agenda”. Mujahid clarified that the first point was “an end to the US-led foreign occupation of Afghanistan”, while the second was, “preventing foreign powers from using Afghan soil against other nations”.

Read more: Taliban threaten to pull out of dialogue if withdrawal of forces…

The Taliban confirmed their decision to resume talks with American representatives shortly after the deadly attack on the National Directorate of Security (NDS) compound located in Maidan Wardak province, which resulted in the death of over 120 personnel of the Afghan security forces. The Taliban were quick to claim responsibility for the attack, and Zabihullah Mujahid confirmed that the militant outfit had killed 190 people in the attack on NDS compound.

Reports from Maidan Wardak reveal that more than 126 members of the security forces have lost their life, of which eight were special commandos, during the explosion inside the National Directorate of Security (NDS) training center.

Hussein Ali Baligh, an official of the provincial council, reported that the attack took place around 7 am on Monday morning, as “a Humvee [four-wheel armored military truck] exploded right after entering the NDS building in the city of Maidan Shahr”. More than 150 NDS security officials were inside the building.

“Once the Taliban have concluded the discussion about security matters with the US representatives, the withdrawal of the US forces will leave the Taliban no choice but to establish talks with the Kabul government. “

The explosion was astoundingly powerful and within seconds, the entire building collapsed. Then, two gunmen entered the compound and opened fire at the Afghan soldiers, killing many before being gunned down.

The Afghan Defense ministry issued a statement that the heavily armed Humvee was manufactured in the US, and it had been captured by Taliban from the Afghan military personnel to make it easier to “breach the military stronghold”. Reportedly, the Afghan government did not disclose the correct figure of death. Officials from the interior ministry of Afghanistan also confirmed that disclosing the accurate casualty figure is likely to cause “unrest within the military personnel”.

It is evident that the local provincial authorities of Wardak and the Kabul government attempted to obscure the death toll. Akhtar Mohammad Taher, head of the provincial council of Wardak attempted to reduce the death toll to an alarming extent. He announced, “Our reports reveal that 12 have been killed while 20 are injured, which include several members of the Afghan military force.”

The Ghani-led government has come under severe pressure following this attack. The Afghan President’s office has released a statement condemning the attack, and lamenting “the enemies of the country” for killing innocent civilians. The statement read, “They killed and wounded a number of our beloved and honest sons.”

Khalilzad made these statements in an attempt to obscure his earlier statement from Kabul that hinted the US strategy of maintaining a “military presence alongside pursuing peace negotiations”.

The month of January has been marked with multiple attacks on the Afghan military forces and the NDS security officials, particularly in the Taliban-occupied provinces. On Sunday, a Taliban suicide bomber collided into an official convoy carrying the provincial governor through the Logar province. The governor survived, but eight of his bodyguards were killed. Earlier, a court official was abducted in Parwan province, and a wedding in Helmand province was turned into a brutal shootout.

Only last week, the Taliban had rejected regional pressure amidst threats to walk away from the negotiations and levelling accusations on the US leadership for harboring ambitions of “expanding the agenda”-referring to the US demands of including the Ghani-led government in the direct talks.

Analysts have deduced that Afghan Taliban appear to have cemented their position as a strong diplomatic force in Afghan, and the “puppet government of Kabul” appears to be losing its foothold on being included into the US-Taliban talks. The heart-wrenchingly barbaric attack that occurred on Monday not only destroyed the NDS compound and claimed many innocent lives, but it also landed a deadly and mortifying defeat to the Kabul government and Afghan military.

Read more: How to achieve peace in Afghanistan?

Local provincial council member, Hussein Ali Baligh, pointed out this humiliation by saying, “it reveals the weaknesses of our security forces”. He further commented, “Our forces are brave, but their commanders have weaknesses.”

The attempts of the Kabul government and provincial officials in Wardak to obscure and withhold accurate casualty figures have failed to work in their favor, while the Taliban have been very vocal in claiming responsibility for the attack and cementing their reign of terror.

Zalmay Khalilzad, the US ambassador for Afghan Peace, left Pakistan to meet the Taliban representatives in Doha. He praised the Pakistani efforts for aiding the peace process and urging the Taliban to return to the table. “We’re heading in the right direction with more steps by Pakistan coming that will lead to concrete results.” Khalilzad also stressed that “the US wants peace” and is willing to address all issues in a manner that will secure the sanctity of “Afghan Independence and sovereignty”.

The Taliban will have to seek the support of the parliament, and it is likely that they will come to an understanding as many Taliban officials are jailed by the Kabul government.

Khalilzad made these statements in an attempt to obscure his earlier statement from Kabul that hinted the US strategy of maintaining a “military presence alongside pursuing peace negotiations”. It had reflected a policy of “talks and fight”, and now, after the barbaric attack on the NDS compound, it is evident that the Taliban have also caught up with this strategy.

The fate of the Ghani-led Afghan government hangs in the balance now that the US has held direct talks with the Taliban without the inclusion of representatives from Kabul. During an interview on a leading News Channel, senior security analyst Raheem Ullah Yousafzai commented on the future of relations between the Afghan government and the Taliban,

“Once the Taliban have concluded the discussion about security matters with the US representatives, the withdrawal of the US forces will leave the Taliban no choice but to establish talks with the Kabul government. “

Read more: Taliban blames US, Afghan forces for most civilian casualties in 2018

He further added, “Despite labeling it as ‘weak’ and a ‘puppet’, the government of Kabul is recognized by the world as it was established after a democratic election process. The Taliban will have to seek the support of the parliament, and it is likely that they will come to an understanding as many Taliban officials are jailed by the Kabul government.”

The War in Afghanistan: Curtains without Climax

Will US acknowledgement of Pakistan’s concerns over Indian influence in Afghanistan change anything?