Taxation on Cigarettes proposed at 75% does it make sense? 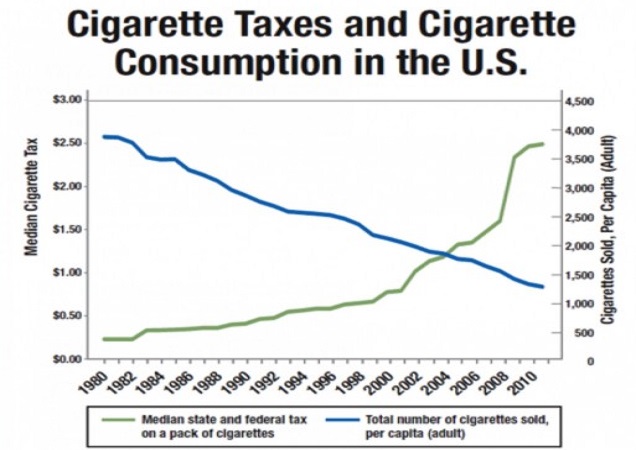 A new effort to improve public health and cut down on tobacco consumption has been launched by a technical working group on tobacco which has recommended that the government increase the excise duty on each pack of cigarettes by up to 75 percent in the upcoming budget due 27th May.

The group, which has members drawn from the World Bank, World Health Organization, the Tobacco Cell at the health ministry, Bloomberg partners and the Federal Bureau of Revenue, has forwarded its recommendations to the finance ministry which state that the excise duty on cigarette packs which fall under the lower slab should be raised from Rs33 to Rs44 and that all exemptions on tobacco for certain branches of the government be removed.

Pakistan had signed a Framework Convention on Tobacco Control (FCTC) in 2004. Under article 6 of the FCTC, Pakistan has to implement a tax and introduce price policies on tobacco products to reduce the tobacco consumption in the country.

Tobacco taxes result in price increases and are considered the most effective options for reducing tobacco use and increase government revenues.

Tobacco taxes result in price increases and are considered the most effective options for reducing tobacco use and at the same time also increase government revenues. Higher tobacco taxes also save public money by reducing tobacco-related health care costs.

A study on tobacco taxation in Pakistan which was jointly conducted by FBR, World Bank, University of Toronto, Johns Hopkins University, University of Illinois at Chicago and Beaconhouse National University states that a uniform specific excise tax of Rs44 per pack of 20 cigarettes could reduce the number of smokers in the country by 13.2 percent, increase tax revenues by Rs39.5 billion, and most importantly lead to a reduction of 0.65 million early deaths which are caused by smoking every year.

The higher cost of buying cigarettes would also dissuade an additional 2.55 million youngsters from taking up smoking each year.

Currently, while Pakistan introduces cursory tax increases every year – which tackles tobacco demand – it has not really tackled the matter of reducing tobacco supply. With over 60 percent of its population under the age of 30 and the majority of them below 18, Pakistan needs to implement stringent laws that prohibit the sale of cigarettes near schools, as one of the main targets of the tobacco industry is the youth.

The tobacco industry is a very powerful lobby in Pakistan and they have succeeded in blocking most of the proposed tax increases and laws regarding the sale of cigarettes. The proposed increase in tax by the NHS for 2016/2017 fiscal year was Rs15.6 which was projected to increase government revenue by Rs40 billion and cause 13pc of smokers to quit, however, the finance ministry only imposed a tax of Rs4.58. The justification the tobacco industry has used against tax raises, and has often been successful in persuading the government, is that it will increase the number of cigarettes smuggled into the market and this will reduce government tax income. The matter of legal vs smuggled cigarettes is not an either/or question because it is the government’s job to restrict smuggling and to look out for the wellbeing of its citizens.

Research shows that passive smoking, being exposed to cigarette smoke even though you don’t smoke yourself, also kills. This has meant that many developed countries have implemented many measures to discourage tobacco use in America and Canada, there are very strict laws that prohibit smoking in public places such as parks and restaurants, banks, private and government offices.  To discourage the use of tobacco it is necessary for the government to impose such laws in Pakistan. Nine out of 10 victims of lung cancer are smokers and more women die of lung cancer than due to breast cancer. In Pakistan, the government spends limited resources on hospitals and lung disease hits lower socio-economic classes much more, not only because they smoke more but also because of the kind of tobacco used. Restrictions on smoking should be the first priority of the government when it comes to public health.

Maryam takes a swipe at judiciary yet again