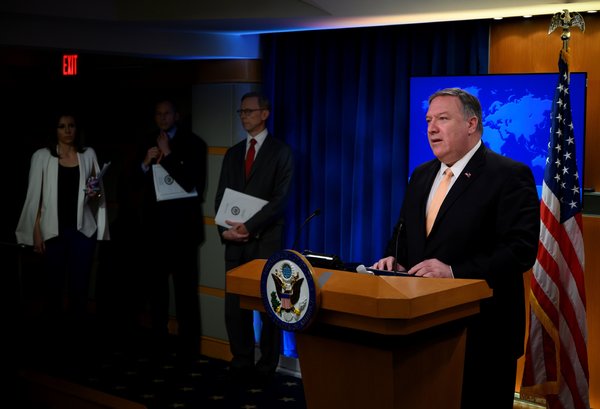 Iranian President Hassan Rouhani has vowed to end his country’s isolation in his second term. He was sworn in today just a day after US President Trump signed a bill increasing sanctions against the Islamic Republic. He said:”We will never accept isolation.The nuclear deal is a sign of Iran’s goodwill on the international stage. He was referring to the 2015 agreement to curb its atomic program in exchange for an easing of sanctions.The US agreed to the deal with world powers including Russia, Britain, France, China, and Germany.

Many also warn against underestimating the resiliency of the Iranian Regime which has taken many crises head-on. It would be interesting to observe if the deal can survive these tests.

Last month, Rouhani had called for a tit for tat response if the deal was revoked. The 68-year old was lambasted for the deal by hardliners when the deal was cracked with the Obama Administration in June 2015. Trump, who had ratified Iran’s compliance with the deal rather gingerly, signed on Wednesday new sanctions into law. The US top man has been unequivocal in his criticism of the regime and the deal. During his election campaign, he called it “the worst deal ever”.

While the administration is in agreement with curtailing Iran, there are disagreements on the tactics that should be employed. Tillerson and Mattis have advocated regime change but the former has warned against reneging the deal. “The greatest pressure we can put to bear on Iran to change the behavior is a collective pressure,” said Tillerson.

This is majorly due to the fact that Trump has tried to ignore the moderate side of Rouhani’s personality.

However, Trump with his overly anti-Iranian bent has other ideas. “It’s a lot easier to say that the Iranians are complying … But, yeah, I would be surprised if they were in compliance,” Trump told Wall Street Journal.

Iran had already shown reservations regarding the sanctions when they were presented in the Congress last week.”We believe that the nuclear deal has been violated and we will react appropriately,” deputy foreign minister Abbas Araghchi said on state television.

However, Araghchi assured that the response would be measured, calculated and intelligent.”The main goal of America in approving these sanctions against Iran is to destroy the nuclear deal and we will show a very intelligent reaction to this action,” Araqchi said. “We are definitely not going to act in a way that gets us entangled in the politics of the American government and Trump.”

Araghchi assured that the response would be measured, calculated and intelligent.

The sanctions limit Iran’s nuclear ambitions, not its ballistic missile program, its alleged support for terrorist groups, or the regime’s human right violations. Iran has protested that the new sanctions are a way to browbeat the country, something which is unacceptable.

Seemingly, Trump is singularly focused on the nuclear-related threat that Iran poses. The dialogue on the deal seems to be out of his toolkit. Analysts opine that such a behavior is likely to strengthen the views of hardliners in Iran. This is majorly due to the fact that Trump has tried to ignore the moderate side of Rouhani’s personality. He was hardly impressed by Iranian voting for moderate elements and rejecting the hardliners.

The US agreed to the deal with world powers including Russia, Britain, France, China, and Germany.

Iranians vociferously protested when Trump condoled terrorist attacks in Tehran in June. The attack was followed by diatribes from both sides. The US has been aggressively pursuing a tough policy against Tehran.

It is predicted that the US-Iran is likely to fester further. Pundits worry that US’ reliance on dubious opposition groups for regime change may work to the detriment of regional peace. Peaceniks worry that Trump’s Twitter surge and the suggestions of hawks around him may lead towards a quick escalation. Many also warn against underestimating the resiliency of the Iranian Regime which has taken many crises head-on. It would be interesting to observe if the deal can survive these tests. If anything, the continuation of the deal is imperative to regional stability, but not the be-all and the end-all.

Is 5G technology dangerous for our health?