Terrorist Activities in Damascus: a Hindrance to the Peace Process 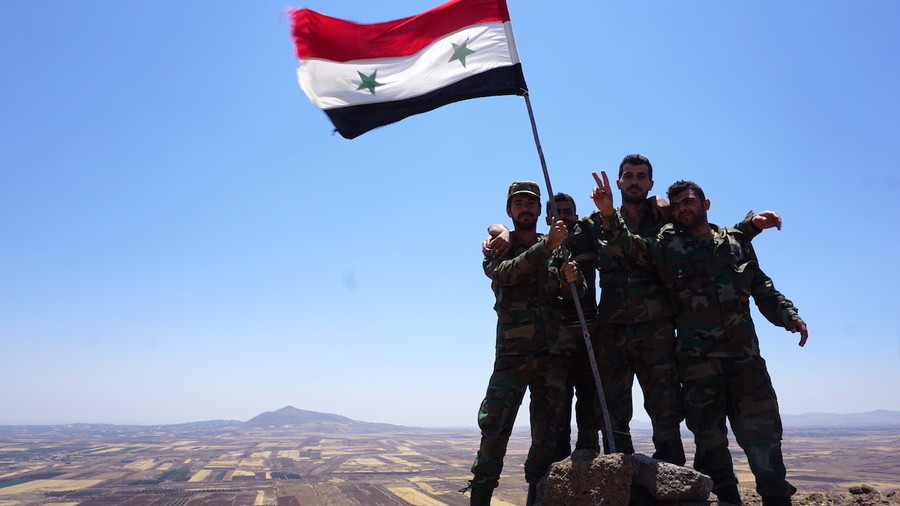 While trying to break into the area of Al-Abbasin, near Jobar, Hayyaat Tahrir al-Sham terrorists launched a surprise and powerful assault on government forces. The terrorist activity took place in the eastern suburb of Damascus on March 19. The clashes were centered on a government-held gap between two besieged opposition enclaves, the Jobar and Qaboun neighborhoods.

#BreakingNews The fighters insouth Damascus, #syria launch an attack to enter Damascus, penetrating the defences of the regime.

The assault was initiated by two suicide bombers who attempted to undermine the positions and break through the defense of the Syrian Arab Army (SAA). Rebels have detonated two large car bombs at 5:20 am on Sunday close to the Jobar neighborhood. Tahrir al-Sham claimed responsibility for the attack. Following the suicide bombings, a huge bomb was then exploded using underground communication systems. The explosion was so intense that it was felt even by the inhabitants of the suburbs of Damascus.

The militants managed to seize a number of buildings and industrial facilities in the western part of Jobar. Some separate units of the government troops were forced to retreat in an attempt to minimize losses and regroup.

The explosion was so intense that it was felt even by the inhabitants of the suburbs of Damascus.

Several hundred soldiers were deployed to recapture the previously abandoned positions in the northern part of the Al-Qaboun area. At the moment, SAA has managed to regain control of most of the objects captured by the terrorists, which include: a power plant, a weaving factory, a part of an industrial district, and the Jobar district.

Dozens of Faylaq al-Rahman militants were surrounded after the Government forces conducted a counter-attack near the “Syrionics” area. Syrian Ministry of Defense has already published a video with the militants eliminated.

Recent events have shown some individual groups of terrorists are doing their best to disrupt the truce and negotiations in Astana and Geneva.

Who is Hayaat Tahrir al-Sham?

The group stated that it may include the Turkistan Islamic Party in the future. With the Damascus Umayyad Mosque is represented on the logo, the group is using the name of Islam and launching various terrorist activities in Syria. On January 28, the same day that Tahrir al-Sham was born, the group announced the formation of its elite units, the “Inghimasi”, some of whom were deployed in Idlib city. They could also be used for suicide infiltration operations and as assault troops.

Since the death of Zahran Alloush there have been conflicts between Jaysh al-Islam and other members of the Unified Military Command of Eastern Ghouta, along with associated groups such as al-Nusra Front and its Jaish al-Fustat operations room. Ahrar ash-Sham has remained neutral. On 18 February 2016, Ajnad al-Sham Islamic Union fighters based in eastern Ghouta announced the “full incorporation” of its fighters into al-Rahman Legion, though reiterating that its fighters based in the western Damascus suburbs of Darayya and Moadammiyyeh as well as in southern Damascus would still operate under the Ajnad al-Sham Islamic Union banner and were not a part of this merger.

On April 26, 2016, the 1st Brigade left the Southern Front and dissolved into the Legion. On May 24, 2016, leaders of Jaysh al-Islam & al-Rahman Legion met to sign a Qatari-backed deal to end hostilities after the East Ghouta inter-rebel conflict (April–May 2016), supervised by Riyad Farid Hijab. Later, on June 14, 2016 clashes erupted again, with the al-Rahman Legion taking control of several zones previously held by Jaysh al-Islam in the southern part of Eastern Ghouta.

On October 21, 2016, fighters from the al-Rahman Legion opened fire on protesters demanding the formation of a joint military operations room between Jaysh al-Islam and the Rahman Legion. Up to 5,000 people attended the protests throughout eastern Ghouta. Less than a week later, the al-Majd Brigades seceded from the Rahman Legion, making it the 9th rebel group to leave the legion since the start of the war. Previously several of these groups have seceded in order to join the Ajnad al-Sham Islamic Union and the now defunct Jaysh al-Ummah.

Previous articleTrump administration bans Laptops, Tablets & electronic devices on flights from 8 Muslim countries
Next article“My vote is not for sale,” Achakzai on the Revival of Military Courts

Lt Gen Asad Durrani - 19 June 2021
Not because it’s incredibly good, or incredibly bad, but simply because it has no credibility. States that lie through their teeth usually have none. Some...

19 June 2021
Previous articleTrump administration bans Laptops, Tablets & electronic devices on flights from 8 Muslim countries
Next article“My vote is not for sale,” Achakzai on the Revival of Military Courts