“Terrorist terrorist, Modi is a terrorist!” protesters in London

Protesters demanded the right to self-determination for the people of Kashmir. More than 5,000 protesters call Indian Prime Minister Modi a terrorist who is responsible for the killing of innocent Kashmiris 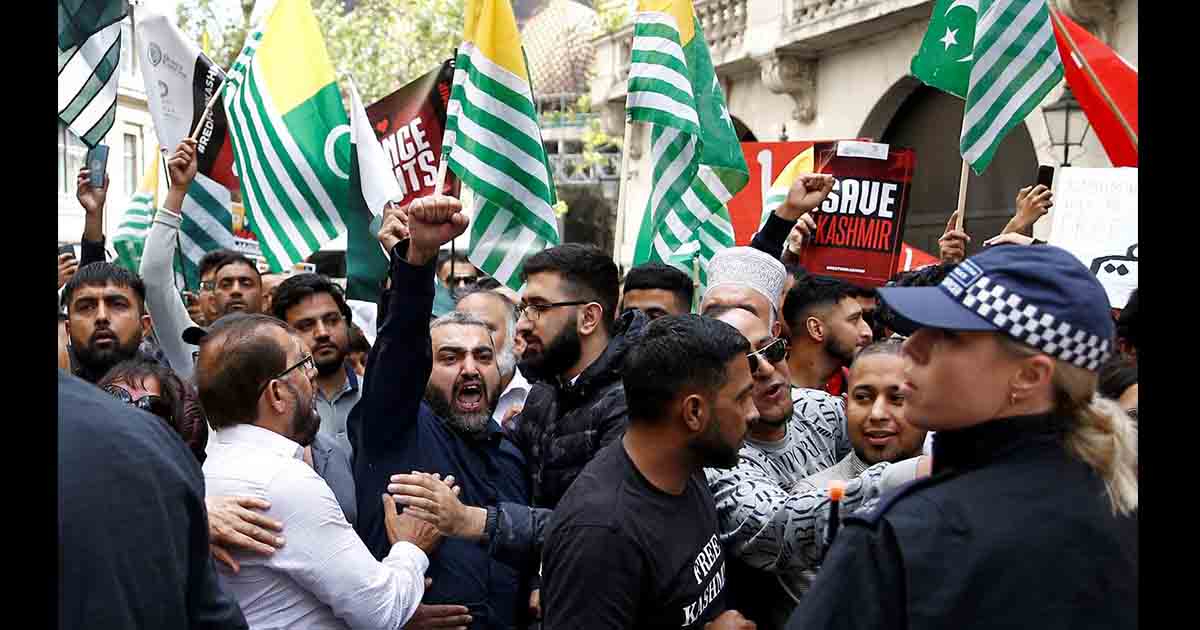 Thousands of protesters demanded right to self-determination for the Kashmiris who have been oppressed by Indian armed forces for the last one month. Rights activists and public demanded justice for the people of Kashmir. It is believed that such rallies shall help Kashmir to get the attention of the international community and seek justice.

More than 5,000 protesters assembled at Parliament Square in the British capital and marched to the Indian High Commission to protest Kashmiris’ oppression at the hands of Indian security forces.

Prime Minister Imran Khan has said more than once that silence of the international community shall create more serious challenges for the South Asian region and beyond.

A number of local and Kashmiri organizations had called on activists and supporters from all over England to come to London and join the protest against the revocation of Article 370 of the Indian constitution, which granted special autonomy to occupied Kashmir.

Journalist Murtaza Ali Shah said on Twitter that today’s protest drew a bigger crowd than the demonstration on August 15, when thousands had protested outside India House on what was also India’s Independence Day.

It’s insane. Thousands have reached outside Indian high commission for #kashmirfreedommarch and more pouring in from all sides. This protest is bigger than 15 August protest when 15K had protested in London at India house #Article370Scrapped pic.twitter.com/kWzd1H4UsK

Thousands of people protested outside the Indian High Commission in London on 15th August in support of the disputed Himalayan region of Kashmir. The protesters were carrying Pakistani and Kashmiri flags and chanting slogans against Prime Minister Narendra Modi. Former British MP George Galloway and Special Assistant to the Prime Minister on Overseas Pakistanis Sayed Zulfi Bukhari also addressed the crowd and condemned the recent decision of the BJP government of revoking the article 370.

According to details, in London, protesters carried banners reading “Kashmir is burning”, “Free Kashmir” and “Modi: Make Tea Not War”. This is not for the first time that activists urged the Indian premier to stay cool rather early in this year, global community had to pacify the angry Indian premier who was ready to wage a war against Pakistan, a nuclear neighbor of India.

Activists and speakers from local Kashmir councils also spoke out, demanding that India end the occupation of Kashmir. Furthermore, a sizeable number of Sikh supporters holding Khalistan banners lent their support to Pakistan.

Former British MP George Galloway took the podium to speak on the occasion. “Modi has taken the world to the brink of war — nuclear war — and as a result risked the safety and security of people all over the world,” he said.

Many of the London protesters had come to the capital from other English cities on specially chartered buses. “We want to show our solidarity with our Kashmiri brothers,” said Amin Tahir, a British pensioner of Kashmiri origin who came from Birmingham on one of the coaches.

George Galloway @georgegalloway On Indian Occupied Kashmir : The Most Dangerous Place On Earth#Kashmir#Article370#KashmirBleeds#IndianOccupation#StandWithKashmir#KashmirUnderThreat#KashmirBanegaPakistan

“Since 1947 Kashmir has been struggling to be free from India. Now Modi has changed the law by force to stop Kashmir’s autonomy,” he said.

Later on, people on social media highlighted the atrocities being committed by Indian government in IoK. Pakistan has been persistently pleading the case of Kashmiris and urging the international community to look into the matter. Prime Minister Imran Khan has said more than once that silence of the international community shall create more serious challenges for the South Asian region and beyond.

Previous articleSalahuddin’s death in police custody exposes ugly face of Punjab police
Next articleWho will be the next Interior Minister in Khan’s cabinet?

18 September 2021
Previous articleSalahuddin’s death in police custody exposes ugly face of Punjab police
Next articleWho will be the next Interior Minister in Khan’s cabinet?

Why US plans to blacklist India?

Is online gaming all that bad?