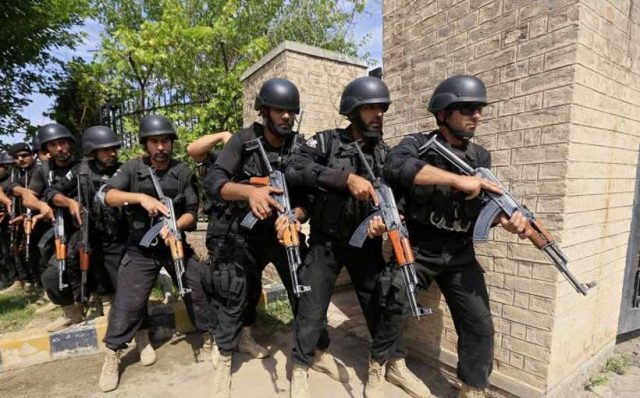 Terrorists involved in today’s Karachi consulate attack have been killed and the area is declared secure by security officials. Two policemen were martyred in an attack outside the Chinese consulate in Karachi’s Clifton Block-4 on Friday morning.

Multiple explosions were heard near Chinese Consulate in Karachi’s Clifton area and were followed by gunshots. Suspects possessing hand grenades and other weapons tried to enter the consulate, the guard at gate resisted, to which suspects opened fired at him, GVS reported earlier.

Rangers and security forces reached the site and cordoned off the area. As per the ISPR statement, all three terrorists have been killed and staff at the consulate is absolutely safe and sound. However, two policemen have lost their lives.

Deputy Inspector General (DIG) South Javed Alam Odho confirmed the death of the two policemen. One person, whose identity has not been ascertained, has also been admitted to the hospital in critical condition.

“The firing has ended and the area is now being cleared by police and Rangers”, said Additional Inspector General (AIG) Dr. Amir Ahmed Shaikh appreciating the efforts of law enforcement agencies in containing the attack.

“Police, rangers were all on duty when the attack happened. The attackers weren’t able to enter the Chinese embassy compound. Three were killed. A Bomb Disposal Squad team is checking the area for explosive materials.” the AIG added.

Foreign Minister Shah Mahmood Qureshi condemned the incident, saying,” It was a cowardly attempt by terrorists.”

He praised the law enforcement agencies for well-handling the matter, “Terrorists couldn’t enter the consulate and have been killed by forces. The matter is under control and the area has been cleared,” Qureshi said.

He further stated that the Chinese ambassador was satisfied with the operation. “Pakistan and China together will defeat the forces that wish to halt country’s development,” Qureshi said. He said that all 21 members of Chinese staff inside the consulate were safe.

Previous articleGovt. not to Interfere in Cement Prices after Analysis: Razzaq
Next articleChinese Consulate Mastermind getting treatment in India

22 September 2021
Previous articleGovt. not to Interfere in Cement Prices after Analysis: Razzaq
Next articleChinese Consulate Mastermind getting treatment in India

‘How much’ is ‘too much’? Canadian rapper died after failed stunt