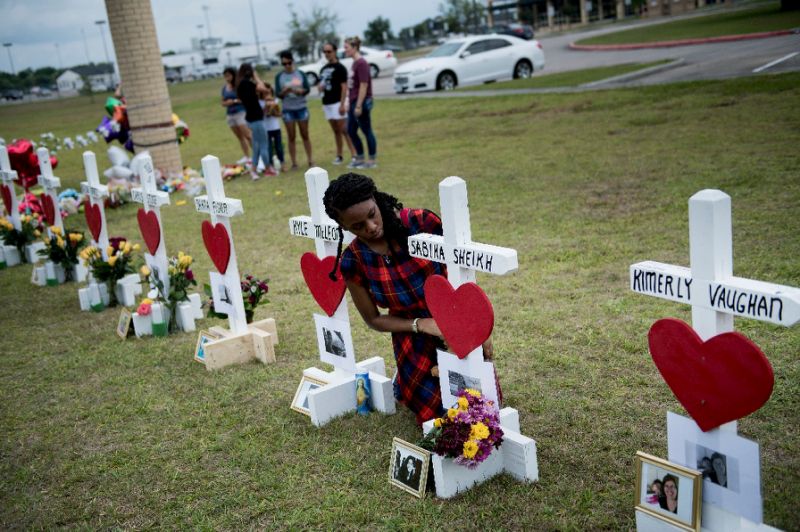 The gunman accused of killing 10 people and wounding 13 at a Texas high school last week was in a state of mental confusion, his attorneys said Monday, as schools beefed up security for students returning to classrooms.

At least two of those wounded in Friday’s mass shooting at Santa Fe High School were still hospitalized, including school police officer John Barnes, who remained in critical condition, said the University of Texas Medical Branch.

Dimitrios Pagourtzis, a student at the school, faces charges of capital murder and aggravated assault of a public servant. He is alleged to have used his father’s legally owned shotgun and the revolver in the rampage.

Pagourtzis’s attorneys told reporters Monday that their client was “in a state,” while the sheriff in the southeast Texas county of Galveston said the 17-year-old was being held “under suicide watch.”I think that there is definitely something going on in terms of mental health history,” attorney Nicholas Poehl told NBC News.

“I still think he’s very confused about the incident.”Law enforcement offered a new timeline of the rampage, saying that two school police officers challenged the gunman four minutes after the attack began.

A gun battle ensued, with the gunman in a classroom and officers in the hallway, Galveston County Sheriff Henry Trochesset told a news conference. “They contained him in that one area, isolated,” he said, “so that he did no more damage to other classes.”

Recalling the attack on ABC television’s “Good Morning America,” student Trenton Beazley said the shooter “was playing music, making jokes, had slogans and rhymes he kept saying.” “Every time he’d kill someone he’d say, ‘another one bites the dust.'”

Mourners gathered at white wooden crosses planted in front of Santa Fe High School, with a victim’s name and a red heart on each cross.

Several Texas school administrators announced new safety measures as nervous parents sent children back to school.”We will be increasing police visibility at each school through the remainder of the school year,” Greg Smith, the superintendent of schools at Clear Creek, said in a letter.

Another school banned backpacks to prevent hidden weapons from slipping through, while others changed dress codes to forbid heavy clothing such as the trench coat Pagourtzis was said to be wearing to conceal his weapons.

Santa Fe school officials said students would return to classrooms one week from Tuesday. Texas Governor Greg Abbott, a Republican, officially announced a series of town hall meetings to discuss schools safety. They will be held at the state capital starting Tuesday.

Texas, a conservative stronghold, has some of the most permissive firearm laws in the United States, and new gun restrictions are unlikely. Abbott has focused on mental health issues and arming school personnel.

Pagourtzis’s attorneys told reporters Monday that their client was “in a state,” while the sheriff in the southeast Texas county of Galveston said the 17-year-old was being held “under suicide watch.

The Democratic mayor of Houston, while advocating for metal detectors at all schools, on Monday called for tougher gun laws, as well. “There’s nothing wrong with reasonable, pragmatic (gun) restrictions,” Sylvester Turner said at a news conference.

A statewide moment of silence also was held in the morning to remember the eight students and two teachers killed. Mourners gathered at white wooden crosses planted in front of Santa Fe High School, with a victim’s name and a red heart on each cross.