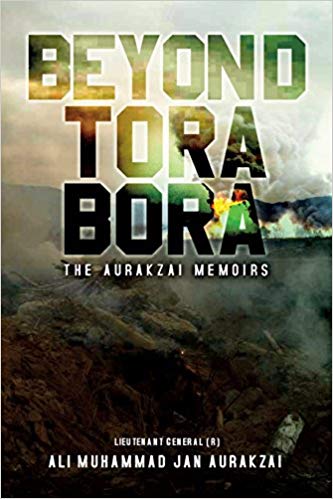 Islamic State militants, under pressure from Afghan and U.S. forces, have seized a new stronghold in Tora Bora, a mountainous area dotted with caves along Afghanistan’s border with Pakistan.

The militants seized the territory from the Taliban last week after days of heavy fighting, in a show of strength just two months after the US military dropped its largest non-nuclear bomb ever used in combat on a nearby Daesh stronghold.

“We are in Tora Bora but this is not the end. The plan is to take more territory from the government and the Taliban.”
– Abu Omar Khorasani

Abu Omar Khorasani, an Islamic State commander in Afghanistan, told Reuters that his fighters had seized Tora Bora and were also battling government troops, who are backed by US ground troops and aircraft.

Read more: ISIS leader Abu Bakar al-Baghdadi killed: Who will be his successor?

Government forces have launched new operations targeting ISIS, but more fighters are being recruited or crossing the border from Pakistan, said Attahullah Khogyani, spokesman for the Nangarhar governor’s office.

First emerging in 2015, IS’s local affiliate has made steady inroads into Afghanistan, overrunning large parts of Nangarhar and Kunar provinces and challenging the bigger Taliban militant movement on their own turf.

The fall of the Tora Bora has also prompted heated discussion in the Afghan parliament, with lawmakers warning the government of growing IS activity in eastern Afghanistan.

Afghan quagmire: No end in sight

Afghanistan has been marred by violence and destruction since 1979 Soviet invasion. Decades of unrest and violence have wreaked havoc across the landscape of a country which is also labeled as the graveyard of empires.

The post-2001 Afghanistan was overshadowed by the conflict between Taliban and US-backed Afghan National Army (ANA). Taliban made rapid advances and exposed the weaknesses in the fragile Afghan military. Daesh emerged in Afghanistan in 2015 and consists primarily of former Pakistani and Afghan Taliban members.

ISIS captured the strategic mountainous region after weeks of fighting with Taliban forces in the area which had to retreat in the face of a relentless assault by IS militants.

Interestingly, Daesh in Khorasan province, (alias of IS in Afghanistan) not only targets the Afghan security forces but also Taliban fighters in the country. Videos of IS fighters executing Taliban fighters which emerged in 2015 caught everyone by surprise. The rise of this notorious terrorist organization has posed a serious threat to Taliban who considers themselves as the only legitimate insurgent group in the country.

Has the rise of IS in Afghanistan pushed Taliban and the Afghan government on the same side of the isle?

The capture of Tora Bora by Islamic State is a symbolic victory for the notorious group. It captured the strategic mountainous region after weeks of fighting with Taliban forces in the area which had to retreat in the face of a relentless assault by IS militants.

Interestingly, the capture of this area by Daesh has created a very interesting situation on the ground in Afghanistan. The US considers Daesh as the biggest threat to world’s peace and is busy targeting the group in Syria and Iraq. US-backed Iraqi forces are on the verge of recapturing Mosul from IS which captured it in 2014.

The recent advance by Deash will not go unnoticed and the US high command in Afghanistan will take action to dislodge the group from the strategic mountainous region.

On the other side of the border in Syria, US-backed Syrian Democratic forces are busy fighting IS in and around Raqqa, the de facto IS capital. The US has also made its intent clear of fighting the group in Afghanistan and dropped the largest non-nuclear bomb, the MOAB, on the group position in Spin Ghar Mountains a few months ago.

In its 16 years long war against Taliban in Afghanistan, the US never used such a massive bomb. The use of such an arsenal by Trump administration indicated its intent of not providing a breeding ground to IS in the country.

The recent advance by Deash will not go unnoticed and the US high command in Afghanistan will take action to dislodge the group from the strategic mountainous region. News of ANA concentrating in the areas around Tora Bora are emerging which indicate that a government offensive to take the area is more than likely.

Taliban forces will also not allow Daesh to remain in Tora Bora for long for the fears of the latter consolidating its position in the region. Taliban are expected to regroup and launch an offensive of their own to recapture the rugged mountainous hideout.

Any chances of the Afghan government cooperating with Taliban to dislodge Daesh from Tora Bora are unlikely. However, the Afghan government would prefer Taliban in the area rather than Daesh. This would mean that Afghan army would prefer not to hamper any Taliban offensive in Tora Bora to fend off Daesh militants for two reasons. First, it would save ANA from launching a costly offensive which it could barely afford and secondly, it would weaken Taliban which might increase the pressure on the insurgent group to negotiate an end to the Afghan bloodshed.

Whether Afghan government and Taliban are on the same side of the aisle after the capture of Tora Bora is yet to be determined.

Previous articleThe summoning of the Sharif family by JIT: Shall we praise the Prime Minister?
Next articleWhy is the US attacking the Syrians who are fighting ISIS?

24 July 2021
Previous articleThe summoning of the Sharif family by JIT: Shall we praise the Prime Minister?
Next articleWhy is the US attacking the Syrians who are fighting ISIS?

Trailer of “Tiger Zinda Hai” is out with a Big Bang!