The dogs who sniff out explosives in Kabul

A common sight around the Afghan capital, explosives-sniffing dogs are deployed at checkpoints and government facilities. 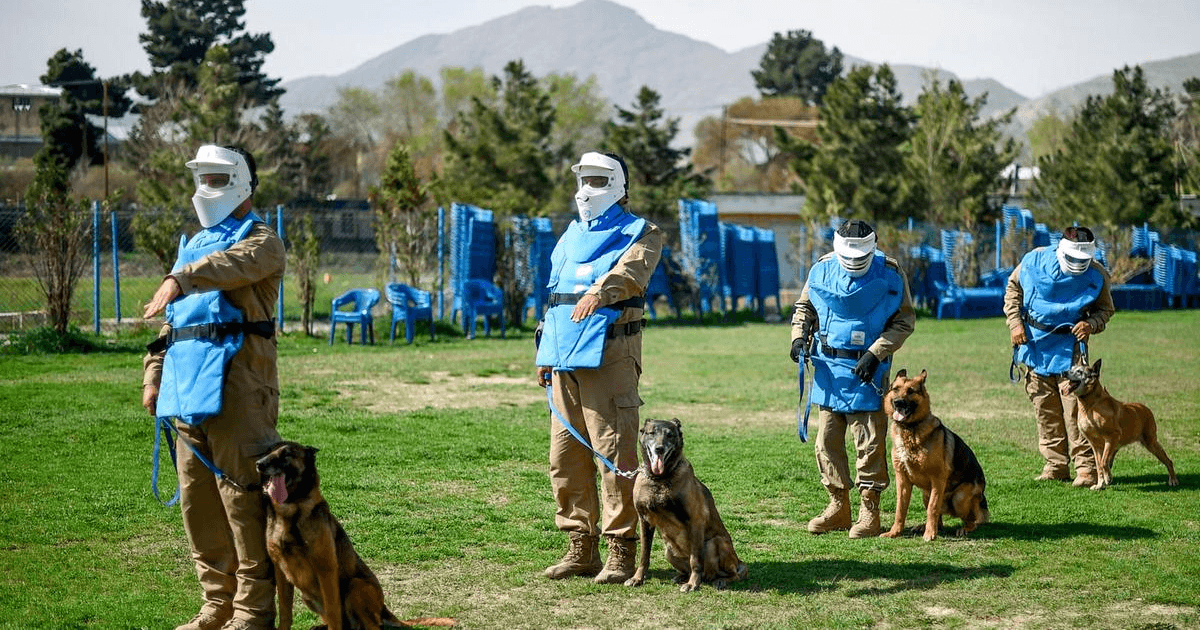 Naya, a three-year-old Belgian Malinois, focuses intently as she leaps over hurdles and zooms through tunnels on an obstacle course at a training center on a hill overlooking Kabul.She seems to be having fun, but is in fact being trained along with other dogs for a life-or-death mission: finding explosives in a country where hidden mines, bombs and weapons routinely kill.

Naya is one of about 200 dogs at the Afghan capital’s Mine Detection Centre (MDC), a non-governmental group raising the animals from rambunctious pups into a disciplined force, and teaching handlers how to work with the canines.

A common sight around the Afghan capital, explosives-sniffing dogs are deployed at checkpoints and government facilities, where they are an important tool in combatting the flow of homemade bombs being smuggled into Kabul.

“The dogs are very useful — they are very fast, they do their jobs with great speed,” Taj Mohammad, a long-time trainer at the center, said on a recent visit.

Handlers demonstrated how they train dogs to hone in on particular scents — explosives mainly, but also narcotics — by using a special carousel of identical metal cannisters that conceal different smells.

Each time a dog correctly identifies a target smell, the handler gives it a rubber chewy ball to chomp on as a reward.

“The relationship with the handler must be perfect. If it does not work, there will be casualties,” Mohammad said.

It takes about two years to train an explosives dog, and the process is intense for both the handler and the canine. The animals at the MDC are all German Shepherds or Belgian Malinois.

“It’s as if you are building a house or bringing up a child,” Mohammad said.

Handlers get about $500 a month for their dangerous work — not a bad wage in Afghanistan — as well as life insurance and retirement benefits.

Explosives are “a hidden enemy, so all the time I have a little fear in my heart,” dog handler Zabihullah Amin said.

No more mine detection

After the MDC was established in 1989, the dogs mainly came from the Netherlands, but now most are local after breeding started here in 1994. More than 1,100 dogs have completed the training.

The canines’ initial mission was to hunt for landmines, a vital task in a country left strewn with the devastating weapons during the war with the Soviet Union in the 1980s.

But the dogs’ use tapered off in recent years following a series of incidents where they missed explosives, sometimes causing casualties as people returned to areas thought to be cleared.

According to Abdul Qudos Ziaee, head of operations at Afghanistan’s Directorate of Mine Action Coordination, dogs can be a useful mine-detection tool if properly managed.

But in several areas contaminated with anti-vehicle mines, some agencies failed to use the canines correctly or handlers were improperly trained, leading to sloppy practice and areas of terrain left dangerous.

“Whether it was fault of the dog handler or the dog was not properly trained … the mine will be missed and the negative consequence will be borne by civilians,” Qudos Ziaee said.

Dogs can still be used to sweep large areas deemed “low threat”, he said, noting that procedures are currently being revised and new standards will be introduced in about a year.

At the MDC, handlers insist dogs are a better tool for finding mines than mechanical detectors, as they can sniff the explosives in non-metallic devices.

According to Ziaee, at least 1,432 people were killed or wounded in Afghanistan by mines and so-called explosive remnants of war in 2018.

Mohammad Wirwais, who works at the Mine Detection Center, was blinded by a mine while clearing terrain in 2008.

“I am fortunate and lucky, I have friends … who lost their lives to mine explosions,” he said.

“I am good, thank God, I can solve my problems on my own, and I can work here too.”

Afghans risk their lives to vote in delayed Kandahar poll