The media’s dark side reflects our own, and other lessons Jeewan Hathi teaches us

This absurdist comedy tackles the morning show rating rat race and the lows people stoop to when fame is at stake.

A satirical take on our ‘morning show’ obsession, the movie is a timely one. The premise sets us up to expect some sharp, crisp analysis on phenomena that is Pakistani morning shows – television programs (most often hosted by women) that routinely yank people out of their worlds and place them in the spotlight to give them their 15 minutes of fame. 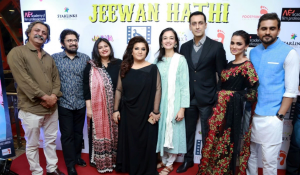 Jeewan Hathi is the story of Natasha (Hina Dilpazir), an “overweight, overage” morning show host whose ratings are plummeting. Her former husband Tabani (Naseeruddin Shah), who’s also the owner of the network, has her replaced, palming off her coveted time slot to a younger television show host, Simmy. As if that wasn’t enough, he also plans to marry Natasha’s replacement.

To access the complete article, please use this link: Dawn (Images)

Xi travels to Saudi for three days of Mideast outreach