The Muttahida Majlis-e-Amal rises from the ashes 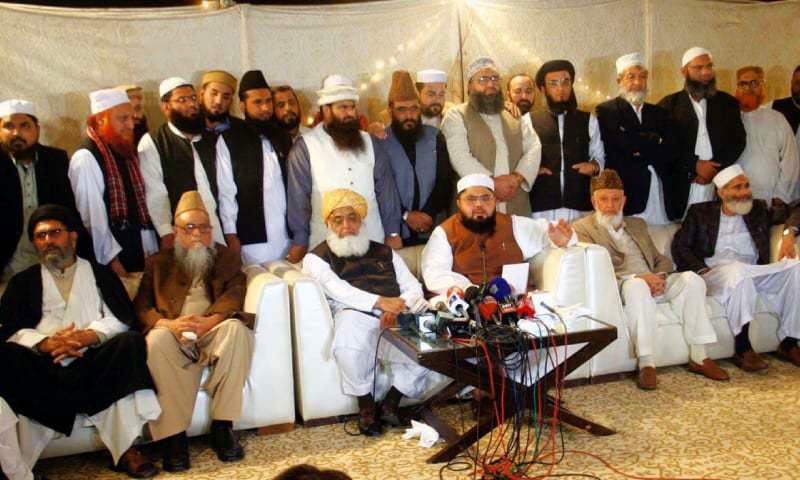 A top-level meeting of religious parties’ heads, which included the Jamaat-e-Islami, Jamiat Ulema Islam-Fazl (JUI-F) and other parties, has decided to resurrect the Muttahida Majlis-e-Amal (MMA), a coalition of the religious political parties of Pakistan.

The move aims to stabilize the position of religious political parties in the current Pakistani political spectrum.Speaking to media along with leaders from other parties, Sirajul Haq said they have decided in principle to restore the MMA, of which a formal announcement would be made next month in Karachi.

He said a consensus on the restoration of the MMA was achieved in the light of recommendations presented at the meeting and they would hold a meeting of at the residence of Shah Owais Noorani in Karachi in mid-December.

The MMA will be hard put to perform against the accountability drive of PTI as well as the vigorous campaigning of the TLYR and MML in the 2018 elections.

He added the parties which were not represented at Thursday’s meeting would also be approached. The Muttahida Majlis–e–Amal was a political alliance consisting of ultra-conservative, Islamist, religious, and far-right parties of Pakistan that opposed President Pervez Musharraf and Prime Minister Shaukat Aziz.

The alliance was proposed by Tehreek-e-Islami leader Maulana Naeem Siddiqui but its founder is considered to be the late JI chief Qazi Hussain Ahmed who exerted much effort for its formulation.

Read more: Aggression in the region: Islamabad all-set to draw support against the…

The usual conspiracy theorists allege it to be an “establishment” project but observers cited its formation and rise due to a variety of factors. Conservative opposition to Pervez Musharraf’s enlightened moderation as well as an expansion of America’s wars into Muslim lands is asserted to be behind the MMA’s rise to power.

The MMA acquired the provisional government of Khyber–Pakhtunkhwa and formed an alliance with the ruling PML (Q) in Balochistan. However, despite its appeal to religious feelings, the MMA soon fell into disfavor due to infighting, corruption and failure to deliver on electoral promises.

Attempts to rebuild the MMA in 2008 were rebuffed by the JUI (F) who had become part of the PPP government.The current atmosphere does not seem to be favourable for the return of the MMA due to a plethora of factors. The TTP and assorted groups have battered the social conservatism that was the driving force of the MMA primarily due to militancy.

The Muttahida Majlis–e–Amal was a political alliance consisting of ultra-conservative, far-right parties of Pakistan that opposed Pervez Musharraf and Shaukat Aziz.

The mantle of anti-imperialism has been taken by PTI and the shrunk space for religious political activism has been invaded by new upstarts such as the Tehreek-e-Labaik-e-Rasoolullah and the Milli Muslim League.

The current MMA does not seem to be a movement to cash in on a particular wave of populism but more of an attempt by some religious political players to safeguard their political existence. The MMA will be hard put to perform against the accountability drive of PTI as well as the vigorous campaigning of the TLYR and MML in the 2018 elections.