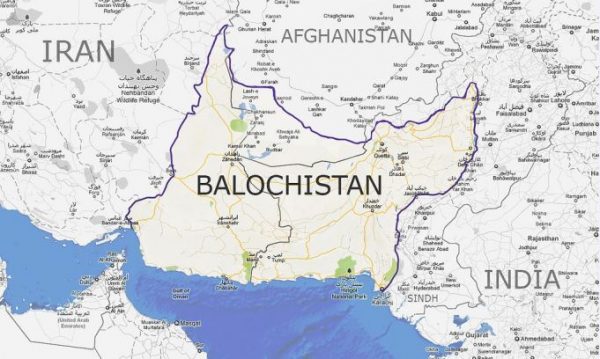 People and territories do not exist in isolation; the shaping of nations and territories is an on-going historic process and by default, it moves forward. An unbiased and non-selective account of history does tend to ascertain how over a course of centuries the shaping of the region inhabited by the Baluch occurred under the influence of empires to its east and west. The Baluch nation was never severed arbitrarily. The tale of Baluch people ran parallel to the history of the region and the ethnic Baluch population by and large remained divided mainly between Sistan-Baluchistan in Persia and Baluchistan in Pakistan similar to the division of the Pakhtun across the border between Afghanistan and Pakistan.

Hence if in the 21st century, the self-proclaimed ruler of the so-called Greater Baluchistan, i.e. the hereditary Khan of Kalat, goes as far as to claim dominion over Baluch territory that extends across the border into Iran, one cannot help but speculate if this mythical affair of ‘Greater Baluchistan’ is, in fact, a call for perceived liberation of Baluch people or simply the means to achieve the next goal of the Great Game. Quite obviously dominion over Sistan-Baluchistan cannot be accomplished without subjugation of the will of sovereign Persia and that in fact says the rest especially in the context of the more recent developments in the Great Global Game.

Jinnah did not hesitate to unequivocally outline more than once the welfare of Baluch people must be made one of the foremost priorities of the Federation.

As for the alleged perception of the occupation of Baluchistan, it should suffice to say the State of Pakistan has every right to curb any revolting elements within its borders, not unlike many other sovereign countries around the world that struggle with pseudo-separatist movements within their defined borders.

One can certainly not disagree that on part of the State we have witnessed continued dearth of comprehension of the dynamics at play in Baluchistan and the subsequent lack of a wholesome and proactive approach, instead only reactive measures to pacify the unrest, but to dispute Pakistan’s legal right on Baluchistan is as flagrantly erroneous as Israel’s claim to the Palestinian territory.

The inclusion of Baluch territories in Pakistan was the outcome of the due political process that followed the Independence of India Act 1947. The Khan of Kalat publicly announced accession to Pakistan as did other princedoms prior to Kalat. This is a historic fact regardless of the exceedingly selective and highly twisted account of history that has been propagated to support the perception of occupation.

It is now no secret that individuals as nefarious as George Soros, the Hungarian-American Zionist who is the key force behind organizing and abetting pseudo-revolutions all around the globe, has been at work for long via various non-militant organizations and publications like the Human Rights Watch, Radio Free Europe and the Foreign Policy Magazine among many others, to run propaganda campaigns aimed at portraying episodes of violence in Baluchistan as the sole consequence of brutality on part of the State.

Selig Harrison, of the Soros & Rockefeller funded Centre for International Policy, has blatantly made explicit calls for arming the so-called Baluch nationalists: “to counter what China is doing in Pakistan, the United States should play hardball by supporting the movement for an independent Baluchistan along the Arabian Sea and working with Baluch insurgents to oust the Chinese from their budding naval base at Gwadar.” Carnegie Endowment for International Peace is yet another conspirator that has promoted the so-called cause of ‘Free Baluchistan’ and has been sponsoring the Baluchistan International Conference that is held annually in the U.S.

Jinnah was too well aware of the possible perils that lay ahead both for the newborn state of Pakistan and the Baluch people if the quagmire that the affair of Baluchistan presented was not handled with great deliberation, profound insight and an abundance of foresight.

Available evidence, regardless of how scanty up until the revelations of Kulbhushun Jadhav, now categorically points towards the involvement of India and the U.S. in skillfully manipulating the circumstances in Baluchistan at different points in time. In fact, it is quite unchallenging to conclude how perfectly the clandestine effort to fuel unrest in Baluchistan falls in line with the covert underhanded tactics commonly employed by global powers to achieve objectives of the New World Order.

The fact the hereditary Khan of Kalat also alludes to ‘moral responsibility’ of the British in his plea for support for Greater Baluchistan is yet another point that betrays the authenticity of the cause of perceived liberation.  It was the British themselves that denied Baluch people the right to reforms unlike the rest of united India.

The British Administration cunningly cited the political backwardness of Baluch people and the disunited nature of Baluch territories as reasons for turning down the demand for reforms whereas it was precisely these very facets of the situation in Baluchistan that were in dire need of being addressed so as to commence the process of bringing the Baluch into the mainstream on the same footing as the rest of British India. The truth of the matter is that the British had no interest in uplifting the Baluch.

Read more: The U.S. deep state recklessly edging its way towards balkanization of…

Their sole aim was to cash in on the political backwardness and division amongst the inhabitants of the region for a long time to come.  Not to mention, the financial and political patronage afforded to the Baluch elite by the British Administration through the course of their rule in India and the deliberate tampering of the true spirit of the tribal system whereby benefit of the tribal elite no longer remained entwined with that of the tribe itself.  It is in this historical context that we now see a bunch of self-exiled Baluch elite beseeches the British to become the saviors of the Baluch people. However, this is no display of Stockholm syndrome wherein the abused develop a distorted perception of the abusing authority and grows to trust the abuser.

Mir Suleiman Dawood summoned British support and articulated his keenness to accept provision from Israel, if that may be the case, in strict accordance with the designs of global powers for the establishment of the New World Order.  From an impartial perspective driven by logic the petition for support made by Mir Suleiman Dawood therefore only tends to betray the truth hidden behind the narrative of alleged Baluch nationalism and the banners of Occupied/Free/Greater Baluchistan i.e. it is not much more than a strategically employed vehicle of the New World Order with its rein safely resting in the hands of global powers and their operatives.

Neither the so-called nationalist Baluch Elite (who not so surprisingly choose to live in self-exile in the power centres of the modern world and are more than welcomed as political asylum seekers by their hosts) nor their corporate sponsors or their ‘friends’ in the West’s military-industrial complex, have any interest in the welfare of the Baluch. To the contrary, it would not be an overstatement to say none of these entities gives a hoot about ‘human rights’ or ‘liberation’ or the welfare of common people.  As with ‘democracy’, these emotional slogans are employed only to appeal to the more susceptible among the general population as well as draw in the pseudo-intellectual section of the society.

Read more: The US to Pakistan: no reimbursements if action not taken against…

The socio-cultural spectrum in Baluchistan is undoubtedly characterized by the tribal system and a vast majority of tribal leaders is unquestionably very resistant to allow measures aimed at empowerment of ordinary people since from their standpoint permeation of positive influence at the grass-roots level may tend to undermine their authority and control over the destiny of their tribal subjects thus rendering them irrelevant.

However the bottom-line is had the rulers of Pakistan been sincere at seeking a resolution to the grievances of the Baluch over the past 70 years, we would have effectively removed, to a large extent if not fully, the seeds of discord that have been nurtured and exploited since before the birth of Pakistan. Jinnah was too well aware of the possible perils that lay ahead both for the newborn state of Pakistan and the Baluch people if the quagmire that the affair of Baluchistan presented was not handled with great deliberation, profound insight and an abundance of foresight. Hence in February 1948 when he addressed the Shahi Jirga in Sibi he went as far as saying:

“I may point out that Baluchistan is a deficit province already to the extent of one crore and a half and Pakistan will have to bear further financial burden to help the people as indicated above but I am hopeful that Pakistan will not hesitate to bear it for the sake of the progress and welfare of the people of Baluchistan.”

Jinnah did not hesitate to unequivocally outline more than once the welfare of Baluch people must be made one of the foremost priorities of the Federation.Little did he know he would soon not be here to watch over the interests and the rights of the Baluch that he had been advocating for since before the partition of united India and that the rulers subsequent to him would be too compliant to question the covert agenda of the Great Game and too obedient to disengage from it due to vested self-interests.  Perhaps it is not just the Baluch who feel betrayed. Jinnah himself would have had more than reason enough to feel as or more betrayed at the hands of our ruling elite.

Zara Ali has been a teacher for over 24 years now. She also has an experience in marketing. She writes on various domestic and international issues. The views expressed in this article are the author’s own and do not necessarily reflect Global Village Space’s editorial policy.

Iconic Nokia 3310 to be relaunched soon