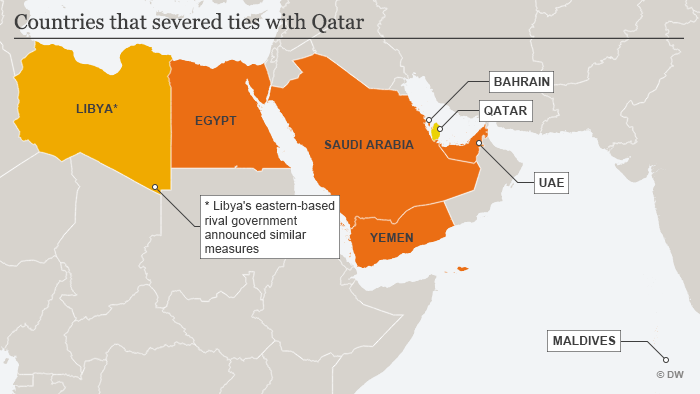 A little more than a century after the dissolution of the Ottoman Empire,the Arab Middle East looks as fragile as the British agent T.E. Lawrence,aka Lawrence of Arabia, had left it at the end of WWI.The only difference is that Britain and France, the traditional movers and shakers in the Middle East, have been replaced by America.

A few days after Donald Trump’s recent visit to Saudi Arabia, Israel,and the Vatican,the Arabian Gulf region exploded into a diplomatic spat where Saudi Arabia,Egypt-Saudi Arabia’s close ally,Bahrain and the United Arab Emirates announced that they were severing all ties with Qatar.As a result,they closed their air space and sea ports to Qatar.Reason? They accused Qatar of abetting terrorism in the Arab neighborhood,cozying up to their enemy Iran,and promoting the destabilizing forces in the region.

Starting in the 1970s, Pakistan’s economy has become so much dependent upon foreign remittances, particularly those from the Gulf states, that the closure of the remittance pipeline will create a grave disaster for the country.

Whereas the falling- out between Qatar and her neighbors will keep the Gulf embroiled in for quite some time,this article will focus the attention on the implications of this standoff for Pakistan.Pakistan’s PM, in an attempt to diffuse the crisis,visited Saudi Arabia, where he was politely snubbed. Reportedly,the Saudi monarch and his crown prince asked Nawaz Sharif,which side Pakistan is on.

Read more:Saudi Arabia or Qatar: Pakistan’s search for neutrality in the Gulf…

Starting in the 1970s, Pakistan’s economy has become so much dependent upon foreign remittances, particularly those from the Gulf states, that the closure of the remittance pipeline will create a grave disaster for the country. Out of the UN reported Diaspora of approximately 76, 00, 000 Pakistanis, nearly 40, 00, 000 are working in the Gulf. We will never know the actual amount of remittances, because a significant portion is sent through money laundering. However, according to the UN Department of Economic and Social Affairs, the expatriates from all over the world send around $20 billion to Pakistan every year. Nearly half of this amount, i.e. $10 billion, comes from the Gulf. For a paltry sum of $10 billion, Pakistani rulers crawl before these Dark Age Arab despots.

A rough breakdown of the Pakistanis working in the Gulf is given below:

Pakistan is finally receiving the blow back from the slowed down world economies, particularly of the Gulf states. The State Bank of Pakistan (SBP) announced that remittances fell by nearly 2% during the first seven months  (July 2016 to January 2017).The decline was registered from the US, UK, Saudi Arabia and United Arab Emirates. Overseas financial transfers will continue to fall as uncertainty prevails not only in America, but also Brexit-marred UK and turmoil-hit members of the Gulf Cooperation Council (GCC).

Pakistan’s over reliance on remittances from the Gulf has another underside. In August 2016, thousands of jobless Pakistanis were stranded and without food and basic life services in Saudi Arabia after their Saudi employers laid them off. Ostensibly, this was due the plunge in world oil prices.

Remittances from Saudi Arabia declined 5.6% to $3.70 billion, United Arab Emirates 1.8% to $2.44 billion and 1.7% to $1.34 billion from other nations of the GCC. The SBP noted that the remittances summed a record $19.9 billion in 2015-16 till June 30. The GCC resident Pakistanis contribute 65% of the country’s overall remittances, with Saudi Arabia and the UAE being the top two.

Read more:Neutrality not an option: Pakistan to choose between Qatar or Saudi…

Pakistan’s over reliance on remittances from the Gulf has another underside. In August 2016, thousands of jobless Pakistanis were stranded and without food and basic life services in Saudi Arabia after their Saudi employers laid them off. Ostensibly, this was due the plunge in world oil prices.Islamabad said 8,520 of its nationals in Saudi Arabia had not been receiving their salaries for several months. A foreign ministry statement said “most of the workers want to leave these companies but only after settling their dues.”

Food stuff from Turkey, India, the US, and European countries continue to be transported to Qatar, using UAE airspace.On the other hand,the Pakistani government has to meekly follow the restrictions.It cannot even imagine of taking an independent stance on Qatar.

In late September 2016, hundreds of Pakistani construction workers flew home from Saudi Arabia, but without the salaries they had waited for many months to receive. A total of 405 Pakistanis owed wages by once-mighty Saudi company Oger. They were among more than 6,500 Pakistanis who had not been paid by the construction giant for the past eight or nine months.

We can have a glimpse of the weak Pakistani economy, and, resultantly, how much we have to stoop low before Saudi Arabia and the Gulf city states. Despite the hullabaloo from the Gulf states, Turkey has landed an armored brigade in Qatar. Another armored brigade is being dispatched. Turkey has taken a bold stand and refused point blank to the Saudi/UAE demand to withdraw its forces from Qatar. This is because Turkey has a resilient economy which cannot be held hostage to the whims of the Arab Sheikhs. Whereas UAE has closed its airspace for all airlines operating to and from Qatar, it has exempted the airlines from India from this ban. Food stuff from Turkey, India, the US, and European countries continue to be transported to Qatar, using UAE airspace.On the other hand,the Pakistani government has to meekly follow the restrictions.It cannot even imagine of taking an independent stance on Qatar.

Read more:Increasing foreign debts: When will Pakistan be truly ‘independent’?

This has happened because, over the last half a century, various Pakistani governments have passively watched the economy become woefully dependent on dole outs and remittances from the Gulf. During this period, successive Pakistani governments have, through cronyism, destroyed the textile industry, Pakistan’s largest foreign exchange earner till two decades ago. The heavy industries nationalized by Bhutto, Karachi steel mills, and Karachi shipyards have either been sold out to cronies, or reduced to hulks through systematic plunder. The remaining plants are under the hammer. After depleting the country of its industrial assets, the successive political governments have encouraged the emergence of a few cartels which control the entire economy. Presently, the economy is being held hostage to sugar and fertilizer barons, most of them politicians and retired civil and army bureaucrats. The economy of Pakistan, as it stands today, badly needs foreign remittances for its survival. Also, the existing balance of payments cannot support the armed forces to even maintain a semblance of a viable defensive posture. And this when the army and the air force are fighting the war on terror as well as keeping more than an eye on the eastern border .

From the  1970s,Pakistani business houses shifted their industrial and commercial operations to the Gulf, South East Asia, Europe, and the US. During the last two decades alone, the bulk of Pakistan’s textile industry has been shifted to Bangladesh and other countries. This is happening when a crop of political leaders, mostly having dual nationalities, is ruling the roost. Are we a nation of zombies dancing to the tune of our brown masters?

Pakistan’s economy will have to be re-engineered if we want to exist, not merely survive, as a strong and self-reliant nation. For this to happen, our over reliance on foreign remittances will have to be replaced by an economy based on value-added agricultural and industrial exports. If we start today, it will take at least a decade to restructure the economy and establish it on firm foundations.