The Reality of Surgical Strikes … 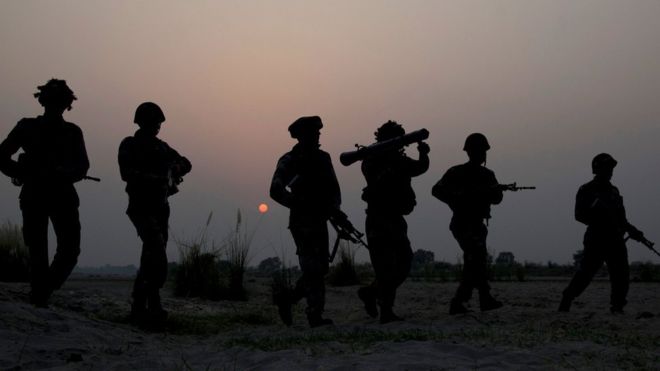 Pakistan-India relations are touching newest low as India claims a surgical strike in Azad Jammu and Kashmir, claims identical in nature to news reports propagated on Indian media that Moscow has cancelled the joint military drills showing solidarity with Indian Forces as requested by the Indian government. India’s campaign to isolate Pakistan at the international level suffered the first setback as Russia rejected its diplomatic plea to cancel joint military exercise with Pakistan and false news circulating on the internet.

India has said the strikes on Wednesday night inflicted “significant casualties” on terrorists preparing to launch attacks in India. But Inter-Services Public Relations (ISPR) told media on thursday that at least two Pakistan Army soldiers were killed as Indian troops fired across the Line of Control in Azad Jammu and Kashmir. The Pakistani military confirmed the deaths of its soldiers yet dismissed the Indian claim of ‘surgical strikes’.

The media in both Pakistan and India is now hotly debating the terminology of “Surgical Strikes”. The first argument comes in mind as how is it possible that the target of a ‘surgical strike’ has no idea it took place? Secondly is this possible for India to use Pakistan’s airspace for 2-3 Km’s without being intercepted by Pakistani F-16’s or JF-17’s? But in this case, Pakistan is being informed by Indian DGMO that Indian commandos with the help of Mi-17 helicopter successfully completed this strike, achieved their targets and returned home safely.

Now a million dollar questions arises here as where are things heading between the two neighboring nuclear-armed rivals? New Delhi has geared up efforts to diplomatically isolate Pakistan in the aftermath of the attack on an Indian army camp in Uri in the Indian-occupied Kashmir which killed 18 soldiers. Pakistan has demanded full investigation in this incident. Pakistan believes that Indian intelligence agency RAW which has been openly trying to destabilize Pakistan by sponsoring terror incidents.

RAW has been in the habit of creating false flags such as the one in Pathankot and now in Uri to malign Pakistan internationally. Pakistan had arrested a senior RAW operative from Balochistan. Since then Indian intelligence agency has been doing all this out of its sheer frustration.

One thing which is becoming usual and it should be condemned as soon after an incident happens the Indian government and especially highly irresponsible Indian media started to blame Pakistan. Instead of talking on army’s abuses against Kashmiri civilians and victims of pellet gun being the main topic, everyone is busy discussing the pros and cons of war with Pakistan and number of deaths being discussed if a nuclear war starts between the two countries.

Risky posturing has come to define New Delhi’s politics and the national media has played a part in this by telecasting sensational news related to these events so much that Indian defence ministry gave a strict guideline to all National media channels to verify the source of news before airing it.

Today Indian media has assumed that an effective response can only be articulated through military means and in the immediate future. Subsequently, most news outlets in print, television and on the internet have taken upon themselves the mantle of strategizing this ostensibly imminent war, on a daily basis and yes they are wining this war at least on the paper. But why this war mongering by Indian government and media when whole world knows that Pakistan has suffered a lot from the menace of Terrorism and still fighting Zarb e Azb throughout the country while challenges still persists for security forces in border areas of Fata and Waziristan.
Read more: The Reality of Surgical Strikes …

In May 2004, The NYT issued an apology for not being more sceptical of the government’s position on Iraq War. The print and electronic media in India finds itself in a similar situation, but it has not proved to be as self-aware. While Modi made a case against pursuing a war during his speech in Kozhikode on 24 September, the media is yet to display an appetite for any restraint.

News Desk - 7 May 2021
Pakistan has started to locally produce China’s single-dose CanSinoBio COVID-19 vaccine with the imported raw material. The country hopes to prepare 100,000 shots before...

Another win for Russian diplomacy: Taliban accept the invitation to attend talks in Moscow

US VS RUSSIA: Turkey to be scrapped off the F-35 program