The small-town Afghan girls sparked in robotic competition in USA 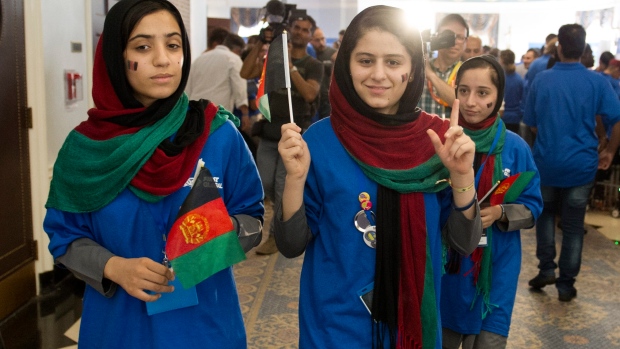 Traveling 800 km to the American Embassy in Kabul just to get their visa rejected twice, the Afghan girls next door finally made their landing in the United States of America, just a week before to participate in the First International robotic competition in the USA.

The girls were infuriated when they were disallowed to enter the country. one of the team members was of the view that it is a sheer insult to us Afghanis at a time when students from travel ban imposed countries like Sudan, Syria and Iraq are welcomed without hesitation.

Team member Rodaba Noori said: “We wanted to show our talents to the world so they would know that we do have skills.”

Despite Afghanistan not in the list of the temporary travel ban imposed on countries by President Trump, the girls burned the midnight oil to get their visa approved after their story went viral on the Internet.

It was just the matter to reach their destination, and young girls became the huge focus for the international world. Out of 830 teens participating from more than 150 nations, the girls from a war-torn country Afghanistan, featuring courage and hope, glued the attraction and praises of all their co-participants and judges alike.

If not they won the medal for their robotic skills; they did take themselves back home, silver medal for “courageous achievement”.

Even Ivanka Trump, Daughter and adviser of US President Donald Trump, couldn’t resist appreciating the young girls of their confidence and achievement.She expressed her views, “For many of you who have traveled great lengths to be here, we welcome you,” she said, turning to smile at the six Afghan girls. “It’s a privilege and an honor to have you all with us.”

While the resilient girls were occupied in their preparations, a Miami participant 18 stopped by them to have his shirts signed by them. The boy, Wai Yan Htun said: “We love them. They’re like superheroes in this competition.”

A mother of a Guyana participant called them, an inspiration while clicking the pictures of Afghan girls.

The participation of Afghan girls also merited appreciation since their journey to the US is critical challenge to the prevailing patriarchal system back in their homeland. Where the concepts of independence and women liberation are a social taboo.

Read More: Hijab style trends: From the Afghan burqa to the cover of a fashion magazine

On Tuesday, the crowds cheered the six girls as soon as they entered the Hall to receive their medal for courage.

It was the first medal Fatemah Qaderyan, 14, of the Afghan team, had ever earned, and through a translator, she explained that she planned to hang it in her room and show it to all of her friends. “I am so excited and very, very happy,” she said, turning the medal over in her hands. “I still can’t believe this happened.”

The first international Robotic competition was not a mere test of engineering skills of the participants but it had some very inspiring stories of determination. Another very similar much-talked story of the three Syrian refugees boys is worth sharing. The teams ‘HOPE’ from Syria named their robot “robogee”-where robo is derived from robots and gee from refugee.

One of the team member Kabour said it was important for the team to win, to “tell the world” refugees are “here and they can do it”.

Teenagers of the two countries, Afghanistan and Syria are another facets of their war-torn nations, which are inflicted with an immeasurable vast humanitarian crisis. The people of these countries are more stereotypically known as dangerous, and their countries are perceived as the breeding ground of terrorism and violence. The robotics competition was the staunch platform for the students belonging to the countries of Iran, Iraq, Palestine, Afghanistan, and Syria to recreate their identities as of an equally harmless, and progressive, civilized nations.

Moreover, it was the girl power that dominated the competition, out of the total of 830 students, 202 were girls, who dared to challenge the preconceived assumption that, it’s the boys who can make the robots.

Read More: World development from the lens of Young photographers

The youth of the world

Their impoverished state and limited resources compromised their journey of success in the competition. Overall, the Europe team won a gold award for getting the most cumulative points over the course of the competition. Poland got silver and Armenia bronze.

Youth development programs initiated by the international organizations, especially United Nations, must look up on these teenagers and students as deserving candidates for the international support, be it of any kind. The youth from the impoverished countries fighting with their plights every day to change their destinies must be internationally recognized. This way they can be saved from falling into the spiral of deep regression sprung out of their inevitably depressing circumstances.