The summoning of the Sharif family by JIT: Shall we praise the Prime Minister? 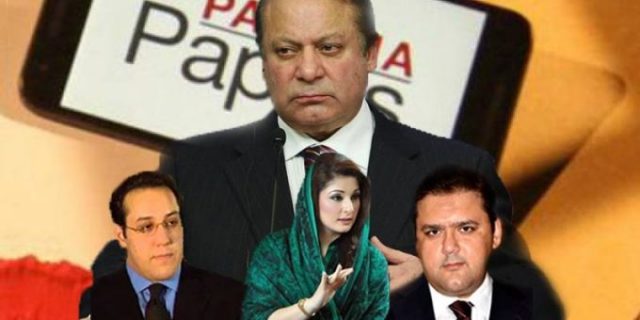 Last week had been consumed with speculations and talk about Mr. Nawaz Sharif and his family’s appearance before the Panama case JIT. What was meant to be a simple act of legally binding nature, has been hailed (by one side) has some great deed of personal sacrifice, and (by the other) as an eyewash.

And so, it must be asked: was Nawaz Sharif’s appearance before the JIT, or that of his family members, really such a big deal? Was there any other option available to the First Family of PML-N? Did they appear before the JIT as a testament to their belief in accountability? Or were they compelled, reluctantly, by the orders of the honorable Supreme Court of Pakistan?

For many months, the people of Pakistan (in and outside of politics) have asked whether the Prime Minister (and his family members) will be called on to rebut the damning allegation made against them in Panama Leaks.

Read more: Will the JIT be able to handle PML-N’s pressure?

In the initial days of Panama Leaks, it was expected that the Prime Minister would be made to answer before the Parliament (an appropriate and representative forum). However, over time, this option was ruled out because of two things: 1) the Prime Minister’s speech before the Parliament was sketchy (at best), providing no details as to money trail, and 2) PTI took to the streets, demanding that a full disclosure be made before a judicial forum.

The honorable Supreme Court (in the majority as well as minority judgment) made damning observations that Mr. Nawaz Sharif has economized with the truth, and provided no details of any bank account, any banking transaction or any money trail.

Thereafter, as the honourable Supreme Court conducting hearings on the Panama Leaks case, it was once again expected that (perhaps) Mr. Nawaz Sharif and family would (voluntarily) appear before the Honourable Court, to clarify the many gaps in their Sindbad-esque story of a Qatari prince, riding through the deserts of Hijaz to come to their rescue. But that did not happen, instead, the honorable Supreme Court (in the majority as well as minority judgment) made damning observations that Mr. Nawaz Sharif has “economized with the truth”, and provided “no details of any bank account, any banking transaction or any money trail.”

In fact, the majority judgment categorically observed that the Qatari letters, which form the very basis of Sharif family’s defense, “have not been proved in accordance with law, are ex facie based on hearsay and not substantiated by any credible material, let alone document(s)/evidence.”

Read more: PM appears before the JIT: A test of accountability

Still, even as PML-N members distributed sweets (no one still knows why), neither the Prime Minister nor his family members, appeared any place to substantiate their fantastical claims. In fact, up until it became clear that the JIT would (inevitably) call members of the Sharif family for testimony, many in the PML-N ranks – e.g. Rana Sanaullah – were adamant that the JIT had “no power” to call upon the Prime Minister.

Is this a heroic act?

In a constitutional democracy, it is hard to justify the accolades and criticism bestowed upon Mr. Nawaz Sharif (and his family) for appearing before the JIT.

But we are here now. The JIT called Mr. Nawaz Sharif, his sons, his brother, and maybe a few more are on the list. And this event… this calling to a criminal investigation, is being hailed by PML-N workers (read: servants?) has some sacrificial act of martyrdom. In a constitutional democracy, it is hard to justify the accolades and criticism bestowed upon Mr. Nawaz Sharif (and his family) for appearing before the JIT. Should citizens of Pakistan (who, in this case, happen to be members of the ‘first family’) be celebrated for doing something that the law and the Constitution compel them to do? Should we praise them for having had no other option but to abide by directions of the Honorable Supreme Court (of which JIT is a mere extension)? Why stop here? Why not sing praises for them for having the moral fortitude of stopping at a red signal? Or for chewing before they eat? While on the point, should we not also bestow praises on Gullu Butt for joining the Model Town investigation? Or on Dr. Asim and Uzair Baloch for answering JIT’s questions?

What is so heroic about being accused in a criminal investigation, and being compelled by law to answer questions for it? Are we really a people who inherently believe that political leaders make a personal concession when they abide by the law?

This kind of mindset is only one shade different than the ideology of monarchs in regressive governments such as Saudi Arabia. Where the ‘king’, is the law. How many people hailed Bill Clinton for having to appear before the special prosecutor in the Lewinsky scandal? Or for Nixon to have faced the impeachment proceedings? Is that our model of heroics?

Regardless, far more pressing and important issues face the State of Pakistan, than how many hours, minutes or seconds, some plush Sharif family member had to sit in an air-conditioned room to answer questions about billions of rupees of personal assets. The Panama Leaks case has split asunder the façade of institutional autonomy of our investigative institutions such as NAB, the FIA, and the SBP.

Can we really claim that our institutions have the audacity to work independently, even if it irks the political masters?

We can no longer claim – even in passing – that our investigative institutions have the moral courage to hold political leaders accountable for anything.

As a prime example of this phenomenon, let us be reminded that it has been more than 4 years since the honorable Supreme Court of Pakistan (in the Asghar Khan case) directed our investigative and law enforcement agencies to start appropriate proceedings against all those who were involved in funding the IJI. Specifically, based on affidavits of the former Army Chief (General Aslam Beg), DG ISI (Lt. General Durrani) and former chief of Mehran Bank (Younis Habib), members of the Sharif family took illegal money to hatch a conspiracy against Benazir Bhutto’s PPP. And yet, despite a clear judgment of the Honorable Court, nothing (at all!) has been done about this issue for almost four years now.

Can we really claim that our institutions have the audacity to work independently, even if it irks the political masters? In many ways, this is perhaps the last straw for such blatant servility of our institutional apparatus.

If it is discovered during the course of these JIT proceedings, that the ‘diamonds’ amongst our investigative institutions do not have the moral and institutional courage to question the king and his family, the people of Pakistan will have no other choice but to seek mob justice… not just from the Sharifs and the Zardaris and the Khans… but also from our feeble institutions. And when that happens, people like Qamar Zaman will have no place to hide.

Previous articleMuslim Brotherhood: the real reason behind Saudi Arabia’s hostility
Next articleThe capture of Tora Bora by Daesh: How will it affect the Afghan quagmire?

18 September 2021
Previous articleMuslim Brotherhood: the real reason behind Saudi Arabia’s hostility
Next articleThe capture of Tora Bora by Daesh: How will it affect the Afghan quagmire?

Witch-hunt or a blunder?

Govt decides to restore Hajj quota of members of parliament

No Forgiveness For You: Supreme Court Rejects Acquittal Plea in Acid Attack Case