The truth about torture: CIA chief can’t lead without facing her past 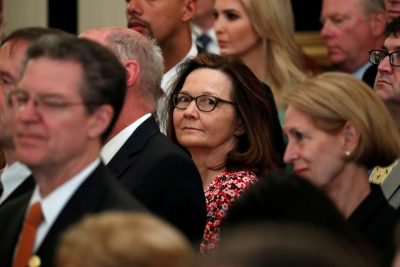 In a surprising move, Donald Trump changed his secretary of state this week. Rex Tillerson was replaced by the Mike Pompeo, who was serving as the director of the CIA. The void left by Pompeo after he became America’s top diplomat was filled by Gina Haspel. She was formerly Pompeo’s deputy at the CIA, also appointed by Trump in February 2017.

As deputy director, Haspel’s job was to help the director of CIA in maintaining intelligence collection, analysis, covert action, counterintelligence and liaison with foreign intelligence agencies. She is a career intelligence officer, having joined the CIA in 1985. Her time at the CIA now spans over three decades. According to the website of the CIA, Haspel has extensive overseas experience. She has been the station chief in several of her assignments and has assumed various senior leadership positions within the CIA. Mike Pompeo praised her as a ‘devoted patriot’. Trump said that she will do a fantastic job at the CIA. She even has several awards to her name, including the Donovan award, the Intelligence Medal of Merit and Presidential Freedom Award; the highest award in the Federal civil service in the United States.

However, Haspel has a dark past. She ran the black site in Thailand-essentially a hidden location operated by the Central Intelligence Agency where suspected Al-Qaeda members were tortured. After running the torture camp, she was promoted to the CIA. After her promotion, she sought to destroy videotapes that provided incriminating evidence for ‘enhanced interrogation techniques’ she used on inmates. One such inmate was Abu-Zubaydah. One of the CIA contractors wrote in his memoir that a CIA official, widely understood to be Haspel, walked into an interrogation room to mock Abu Zubaydah, saying, “Good job! I like the way you’re drooling; it adds realism. I’m almost buying it. You wouldn’t think a grown man would do that!”

Abu Zubaydah was water-boarded 83 times. Water-boarding is a technique of torture used in one of its earliest incarnations during the Spanish Inquisition. Accordingly, the detainee is tied to a bench, with his legs raised higher than his head. The head is then immobilized and a cloth is wrapped around the mouth and nose. Water is poured onto the cloth in a controlled manner and the airway is blocked for about 20 to 40 seconds. This induces the sensation of drowning, and the detainee often ends up vomiting or in convulsions. President Bush authorized water-boarding after 9/11. When CIA representatives said they had done nothing illegal, they were right since water-boarding was declared legal.

A study on the Central Intelligence Agency’s detention and Interrogation Program by the Senate Select Intelligence Committee revealed extensive discrepancies between CIA representatives. The full-length report comprises 6700 pages and remains classified. An executive summary, however, was declared to be unclassified by President Obama in 2012. The report was compiled after a review of nearly 6 million CIA cables and documents between 2009 and 2012. The conclusion of the study was that not only did the enhanced interrogation program led to human rights abuses, it came at a cost of resources that could have been better spent elsewhere since the program did nothing of value to America’s national security apparatus. In other words, the intelligence collected through torture was rarely accurate, as detainees getting tortured would say anything to stop the abuse.

Water-boarding is not the only technique. Others include slapping and ‘wallings’ (slamming detainees against a wall). These were used frequently in concurrence with sleep deprivation and forced nudity. CIA representatives have said that ‘open, non-threatening’ approaches were used but that is not at all the case. Sleep deprivation meant keeping detainees awake for up to 180 hours a stretch (or more than 7 days). Detainees were also placed in iced-water ‘baths’. At least 5 inmates had been subjected to ‘rectal hydration’ or rectal feeding without any documented medical necessity. At times, prisoners being tortured were forced to assume stress positions i.e. orient their bodies in such a way as to induce physical discomfort. They were then shackled in these positions for hours or days on end. In addition to all this, sometimes inmates were shackled in a coffin-shaped box that barely allows the bones to bend enough to fit a living human body inside. Often the cells in which detainees were held were in horrible condition. One CIA official described them as ‘dungeons’, with only a bucket for human waste.

One CIA interrogator promised a detainee that ‘he would never be allowed to see the light of day again and that we can never let the world know what I have done to you’. Another threatened to harm the family of a detainee, including threats of sexual abuse to the detainee’s children and his mother. At least one inmate was threatened by an interrogator when he said he would cut his mother’s throat.

All these techniques had a series of negative effects on the physical and mental health of the prisoners. Some experienced disturbing hallucinations during prolonged sleep deprivation. Others developed a tendency for self-harm. Abu-Zubaydah was water-boarded so many times that he became ‘completely unresponsive, with bubbles rising through his open mouth.’ This interrogation program was designed by contract psychologists that the CIA hired. This is the kind of experience that the new CIA chief has had during her 30-year long intelligence career.

Gina Haspel’s nomination has not been without opposition. A CIA whistleblower, who had exposed the torture program being overseen by Haspel, said that the fact she might become the director is ‘sickeing’. The deputy director of the American Civil Liberties Union’s Washington Legislative Office had this to say about her:

“Gina Haspel was a central figure in one of the most illegal and shameful chapters in modern American history. She was up to her eyeballs in torture, both in running a secret torture prison in Thailand and carrying out an order to cover up torture crimes by destroying videotapes.  The CIA must declassify and release every aspect of Haspel’s torture record before the Senate considers the nomination.”

The Senate still needs to confirm her appointment. The date of her confirmation hearing has not yet been set. There has been some opposition to her nomination, though it’s not exactly bipartisan. Some Democratic Senators such as Tammy Duckworth, Diane Feinstein, and Sheldon Whitehouse oppose Trump’s pick for director CIA. Republicans have a very slim 51-49 majority in the Senate. Technically, there is a chance that she might not get appointed.