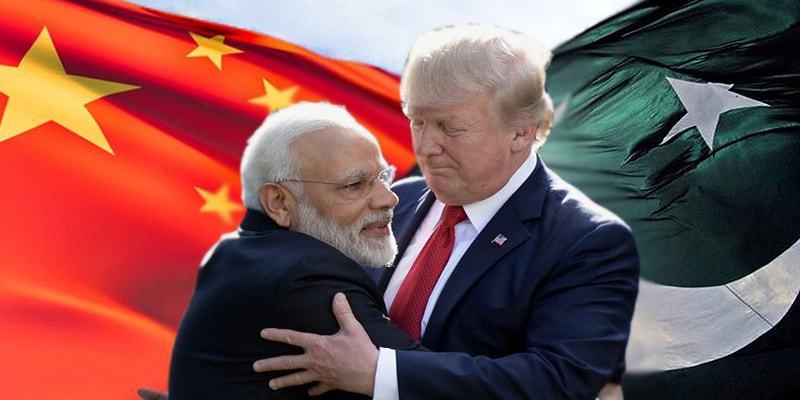 US Secretary of Defense, General James Mattis has said that China’s One Belt One Road (OBOR) initiative is untenable because it passes through a disputed territory. He was alluding to the China Pakistan Economic Corridor (CPEC) which passes through the northern areas of Pakistan – claimed by India as part of the disputed Jammu and Kashmir territory.

While appearing before the Senate Armed Services Committee, the former four-star general said: “The One Belt, One Road also goes through the disputed territory, and I think that in itself shows the vulnerability of trying to establish that sort of a dictate.”

The remarks come at a time when the regional alliances are being solidified with Pakistan moving ever so closer to China while the US and India are expanding the scope of their ties especially in the realm of defense.

Mattis who recently completed short tours to India and Afghanistan said that the US opposes the OBOR initiative because in the era of globalization no country can dictate One Belt, One Road. “There are areas where, also, strategically, we need to confront China where we think it’s unproductive — the direction they’re going in,” said Mattis.

Read more: Why Riyadh is so interested in joining CPEC?

Killing two birds with one stone

The statement of Mattis comes at a time when India is being bolstered as a veritable US ally in the region. In a bid to counter China’s increasing economic clout in the region and beyond, the US is cozying-up to India- terming it as indispensable to US security interests in the region.

Mattis’ statement simply reflects what was already well known about American policy towards China, and suggests that punitive measures might be planned for CPEC

China and Pakistan are not only close allies because of the centrality of CPEC in the OBOR initiative but both countries are joining hands to defy the new South Asia policy rolled out by the US in August this year. India is averse to the OBOR vision because it says that one of the routes of the corridor passes through Kashmir – which it believes to be its part.

The US has, over the past few months taken steps much to the delight of Delhi; the designation of Syed Salahuddin and his party, Hizbul Mujahideen as a terrorist and a militant organization respectively was a veritable victory for India’s narrative on Kashmir.

“The statement is yet another support of the Indian narrative on Kashmir on part of the US,” said defense analyst Lt Gen (R) Ghulam Mustafa while talking to GVS. He said that besides being an attempt to carry forward its great game with China, the US has slammed CPEC to further exert pressure on Pakistan.

Indo-US strategic ties have always added to Pakistan’s paranoia and have dictated its security orientation. Mattis’ statement further points out to strategic nature of Washington-Delhi ties

It is interesting to note that while Indian stance on CPEC has remained consistently hostile, the US has changed its position lately. India has maintained fears that through CPEC, China will meddle into Kashmir, terming it as a direct threat to India’s strategic interests. Indian political establishment, military and a cross-section of the media have shown apprehensions that China would be urged to take steps to resolve the Kashmir dispute in a bid to smoothen the progress of CPEC.

It is in this background that Pakistan has ramped up its complaints of Indian subversive activities aimed at disrupting CPEC. The latest one was the propagation of an unsubstantiated claim which linked the violence in Myanmar with the ISI – ostensibly to disrupt the Silk Road as it also passes through the Rakhine province, and also to drive a wedge between China and Pakistan.

The US, in light of its multi-front rivalry with China, has hardened its stance on the multi-billion dollar project. CPEC was viewed with little concern. In a New York Times editorial in 2015, CPEC was associated with China’s expansion in the region but it was also considered as a venture which could bring stability in Pakistan. The article read: “If China can advance that goal through development programs, the whole region would benefit.”

Senior Associate at the Wilson Center, Michael Kugelman while talking to GVS linked Mattis’ statement with the importance the US gives to its ties with India. He said:”It may be seen as an outrageous statement in Pakistan, but from a US perspective it’s not–rather it’s an acknowledgment that AJK’s status is disputed by India.”

“To be quite honest, as the US-India relationship continues to grow, and as Washington continues to place a premium on strengthening it even more, we could see more and more public messaging in Washington that amplifies and supports Indian policy positions. It’s only natural, given the importance the US places in the relationship with India,” he added.

Kugelman also said that Washington has given a clear signal to New Delhi that it supports its concerns regarding the project.”Washington has never publicly opposed or supported CPEC, and this was a rare case of the U.S. government taking a position–and it’s a position that aligns quite sharply with that of India,” he said.

China is making great headways in realizing its Belt and Road initiatives. Inspired by the potential of this connectivity project, Saudi Arabia has also agreed to join CPEC, giving an inkling of how China is influencing world politics

Prominent scholar and policymaker, Vali Nasr who is famous for his book “The Dispensable Nation”, had termed CPEC as a gap-filler. He asserted:” China is stepping into a void left by the United States when it declined to heavily invest in Pakistan, despite the strategic alliance between the two countries during the Cold War as well as after the Sept. 11, 2001, terrorist attacks.”

The US was skeptical on whether the project would materialize and hence allowed the project to make headways. However, things have changed, not only because of the speedy completion of the Gwadar Port but also other geopolitical factors.

The US has more or less vindicated the stance of Pakistani strategic thinkers on the ever-increasing closeness between the US and India. Former Secretary Defense, Lt Gen Naeem Khalid Lodhi while talking to GVS said the US wants to incite India to do something about the smooth development of CPEC.

China is making great headways in realizing its Belt and Road initiative. Inspired by the potential of this connectivity project, Saudi Arabia has also agreed to join CPEC, giving an inkling of how China is influencing world politics. CPEC is understandably in the line of fire. The US feels that being an important corollary to the One Belt One Road initiative, CPEC will catapult China in a more preponderant position, something which it can ill-afford.

In a New York Times editorial in 2015, CPEC was associated with China’s expansion in the region but it was also considered as a venture which could bring instability in Pakistan

Pundits argue that the US will likely whip up Sino-Indo rivalry to mar China’s economic clout in regional and world politics. Gwadar port lessens China’s reliance on the Strait of Malacca which will not only reduce the cost of transporting goods but also the risk posed by India and US.

Indo-US strategic ties have always added to Pakistan’s paranoia and have dictated its security orientation. Mattis’ statement further points out to strategic nature of Washington-Delhi ties.

Moscow-based analyst, Andrew Korybko talked exclusively to GVS about US’ “natural” opposition to CPEC as he termed Mattis’ statement as a precursor to some sinister attempts against CPEC. He said: “Mattis’ statement is a reaffirmation of the fast-developing US-Indian Strategic Partnership and shouldn’t come as a surprise to anyone.

Despite playing “coy” about CPEC up until now, it should have been rightly assumed by observers that the US would naturally be opposed to China pioneering a non-Malacaa overland route to the Indian Ocean, if even for purely strategic reasons.

Indian political establishment, military and a cross-section of the media have shown apprehensions that China would be urged to take steps to resolve the Kashmir dispute in a bid to smoothen the progress of CPEC

Mattis’ statement simply reflects what was already well known about American policy towards China, and suggests that punitive measures might be planned for CPEC, such as sanctions or even drone strikes, the latter of which would be carried out under the guise of “killing terrorists”. I wrote about this more in-depth in an analysis earlier this summer for the Islamabad-based consulting firm CommandEleven titled “Is Trump Planning To Strike And Then Sanction CPEC?”

Pakistan is seemingly losing out on the diplomatic front as it has not effectively garnered support from its narrative vis India; it could be attributed to India’s aggressive lobbying in the US. Pakistan, on the other hand, has no lobbying firm in Washington which has significantly contributed toward a heavily lopsided narrative in the international community.

Besides, Pakistan has not handled Gilgit Baltistan rightly, an area which India often uses to prop up against Pakistan and CPEC. Prominent historian and author of “The Princely Affair” Yaqoob Khan Bangash while speaking to GVS said it is important for Pakistan to integrate Gilgit Baltistan in the national polity.

Mattis who recently completed short tours to India and Afghanistan said that the US opposes the OBOR initiative because in the era of globalization no country can dictate One Belt, One Road

He argued: “Pakistan should accept the legit overthrow of Kashmiri power on 1st November 1947 and integrate GB as a province. Islamabad should delink it with Jammu and Kashmir; the British gave GB back to J&K only in August 1947 after many decades,”he said.

Read more: Naval sailors attacked in Baluchistan: another attempt to slow down CPEC?

Amid mounting tensions in the region, the new verve given to the Sino-US great game will impact the situation in the Indo-Pak theater; it would be interesting to see how India, being a veritable US ally confront the fast-developing CPEC.The new great game is a multi-pronged and dangerous geopolitical tiff.

Did Russia just reduce the threat of Indian-backed terrorism against Pakistan?