The winners and losers in Trump’s Afghan strategy – II 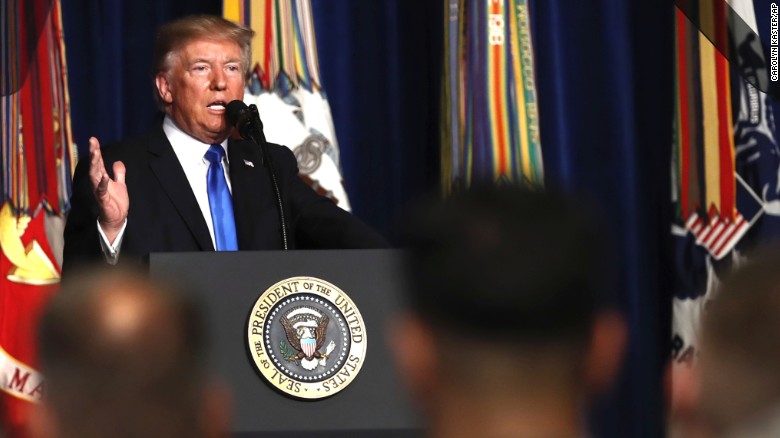 (The first part is here.)

China has paid high attention to the speech by US President Donald Trump on Monday outlining the way forward in Afghanistan. The Chinese Foreign Ministry spokesperson reacted to Trump’s speech within hours and there have been a spate of commentaries alongside in the official media. Most important, Chinese State Councilor Yang Jiechi discussed Afghanistan with the US Secretary of State Rex Tillerson during a telephone conversation on Wednesday.

Read more: The winners and losers in Trump’s Afghan Strategy – 1

All things are taken into consideration, therefore, China is the big winner in Trump’s decision to allow a military surge in Afghanistan

Interestingly, prior to the conversation with Tillerson, Yang had received the visiting Pakistani Foreign Secretary Tehmina Janjua in Beijing on Monday where he stressed that “it is especially important for China and Pakistan to enhance strategic communication under current global and regional circumstances.”

In earlier remarks on Monday, the Chinese Foreign Ministry spokesperson Hua Chunying expressed the hope that the Trump administration’s new Afghan strategy “can help to promote the security, stability, and development of Afghanistan and the region at large.”

Hua strongly defended Pakistan’s record and credentials in the counterterrorism efforts and stressed the high importance of the US cooperating with Pakistan “on the basis of mutual respect and their joint commitment to the security and stability of the region and the world… and (making) concerted efforts for regional security and stability.”

The spokesperson shifted the focus away from Trump’s diatribe against Pakistan to the core issue of fostering Afghan-Pakistan cooperation. She highlighted China’s contribution to foster such cooperation leading to certain recent positive trends lately, and stated China’s willingness to “continuously play a constructive role as its capacity allows”.

On Tuesday, Afghanistan again figured at a meeting between Chinese Foreign Minister Wang Yi and the visiting Pakistani Foreign Secretary Janjua during a wide-ranging discussion “on the entire gamut of bilateral relations, regional, global issues, as well as the situation in Indian Occupied Jammu and Kashmir.” The Pakistani foreign ministry statement said they “agreed to continue close consultations on efforts for lasting peace and stability in Afghanistan and underscored the importance of the Trilateral Afghanistan-China-Pakistan Foreign Minister’s meeting.”

The Chinese commentaries (here, here, here, here and here) carried a strong undertone of skepticism about the efficacy of Trump’s strategy, which heavily depends on the military surge. In fact, they viewed the strategy as a rehash of failed strategies pursued by previous US administrations. But the Chinese commentaries carefully avoided any frontal attack on Trump and instead offered constructive criticism.

Interestingly, Global Times in an editorial underscored the importance of China-US cooperation over Afghanistan:

Chinese perspective, the continued American military commitment to Afghan security is in its national interests. Xinjiang’s security and stability is directly linked to the Afghan situation

Will the US turn Afghanistan into a geopolitical bridgehead in Central Asia or work with China to build peace there?…It doesn’t trust China enough… The US needs to enhance cooperation with China and improve ties with Pakistan to stabilize the Afghanistan situation. China and the US share many common interests in the Afghanistan issue and both wish to see the country return to peace and stability.

In fact, Afghanistan could become a bridge for the two to expand their cooperation. The US should give a constructive response to China’s concerns about a US military base in Afghanistan and support China’s Belt and Road initiative.

A trace of antipathy is apparent towards Trump’s characterization of India as the US’ strategic partner in Afghanistan. The Global Times was of the view that “It will be stupid if the US abandons Pakistan and particularly short-sighted to get too close to India and drift away from Pakistan.”

The bottom line is that China heaves a sigh of relief that Trump has not ordered the withdrawal of US troops from Afghanistan but has taken a U-turn from his campaign pledge to allow a mini “surge” to go ahead. The government-owned China Daily described it as a “precious bow to reason”… (which) gives the impression that Trump is learning the ropes. At least he is coming to terms with the cruel reality in Afghanistan that Obama was concerned about, and the dire consequences of “a hasty withdrawal”.

All the same, the China Daily editorial was pessimistic about the chances of Trump’s strategy succeeding “because military intervention alone will not do the trick… While China welcomes efforts to improve the security situation in Afghanistan and hopes the US policy will help to achieve that and promote stability, it has steadfastly called for national reconciliation and development to be advanced at the same time.” Equally, China insists that “nation building” must go hand in hand with the counter terrorist operations.

Of course, diplomacy is never conducted in the public domain. It stands to reason that discussions have taken place between the US and Chinese officials in the run-up to the announcement of the new Afghan strategy by Trump. Tillerson did acknowledge this. What could be the game plan? Some hints are available in Tillerson’s press statement on Monday and his media briefing the next day. What comes out are the following:

Clearly, China would anticipate that it has a big role to play in the US’ order of priorities in making a success out of Trump’s Afghan strategy. To be sure, the US hopes to leverage the “all-weather friendship” between China and Pakistan to influence the latter’s policies and to bring the Taliban to the negotiating table. This is one thing.

Second, while Trump has a closed mind on getting involved in “nation-building” in Afghanistan, Tillerson separately acknowledged the importance of reforms and good governance. China can play a useful role here, too.

The US needs to enhance cooperation with China and improve ties with Pakistan to stabilize the Afghanistan situation. China and the US share many common interests in the Afghanistan issue and both wish to see the country return to peace and stability

Third, stemming from the above, China must be wondering already ‘What is there in it for the Belt and Road Initiative?’ Trump pointedly showed interest in exploring economic opportunities, which would “defray” the cost of the war that the US is bearing. The connectivity that the China-Pakistan Economic Corridor provides to Afghanistan to access the world market becomes relevant here.

Again, Chinese investments in Afghanistan within the ambit of the BRI hold much potential to revive the Afghan economy. The US will appreciate China’s involvement here.

Most importantly, from the US perspective, China should be co-opted as a partner rather than be forced to link up with Russia and Iran and act as “spoiler.” On the other hand, from the Chinese perspective, the continued American military commitment to Afghan security is in its national interests. Xinjiang’s security and stability is directly linked to the Afghan situation.

Above all, China would expect that a close partnership with the US in the stabilization of Afghanistan will have a salutary effect on the overall relationship between the two big powers. Trump is due to visit China this year – possibly, in November.

Water war between Pakistan and Afghanistan?

Foreign forces’ withdrawal from Afghanistan is not ‘hasty’

Afghan Battle: The US losing lives but for what?

Pakistan’s contributions for the uplift of Afghan people