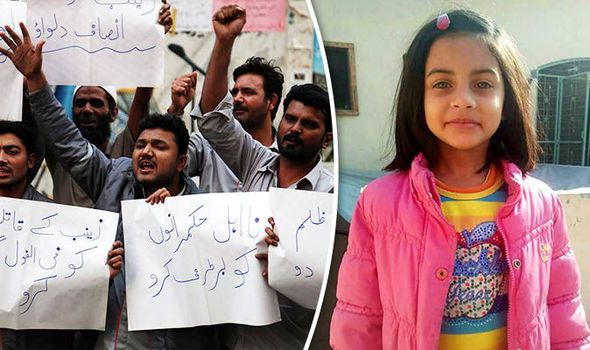 Zainab’s cold-blooded murder and rape have left the people from around the world in fury.

People outside Pakistan too are extending their solidarity and wishes for the victim and her family. Campaign ‘Justice for Zainab; has become the top trend globally on social media.

Protestors throughout the world are posting messages of condemnation remorseful on social media through. Processions and candlelight vigils were held in cross-border India to express the solidarity with the victim and her family.

Civil society says had the government convicted the culprits of Kasur child abuse scandal in 2015, Zainab and other minor girls could have been saved from the heinous incident.

Not just in Pakistan but people from all over the world are demanding a merciless justice for the culprits. In Pakistan, people demand the outright public hanging of the perpetrator.

For those who dont know who zainab ansari is,she is just 7years old kid from the kasur of pakistan #JusticeForZainab #JusticeForAllChildren pic.twitter.com/oCRw0DjRCT

This incident can not be tolerated..all those sitting at home and saying”hota rehta hai apne desh mein aisa”u never know..these vulgar people may target u too(good keep everyone safe)Plz come fwd and make sure that this thing doesn’t happen with any other child#JusticeForZainab

People around the world are raising their voice to seek justice for Zainab.#JusticeForZainab pic.twitter.com/xmVBPhpfO0

When evil strikes ➡ humanity unites,Prayers & empathies can cross distant boundaries & this prayer is from the next door #JusticeForZainab
“The Smallest Coffins Are The Heaviest” pic.twitter.com/H3S5JuRJBb

India too is facing the rising problems of sexual abuse against children. The statistics in Pakistan to give a dreadful picture.

Read more: We will make promises to Zainab and then forget all of…

The recent statistics suggest child abuse in Pakistan has risen by 10% in the last year. Nearly 11 children are reported to be abused daily in Pakistan. The statistics also suggest that minor girls are three times more prone to sexual abuse than boys of their age.

According to reports in media, 12 other girls including Aiman, Fatima, Fauzia, Noor Fatima, Sana, Asma, and Laiba were among minors kidnapped from the suburbs of Kasur in 2017 and whose dead bodies were later recovered from different parts of the city.

People outside Pakistan too are extending their solidarity and wishes for the victim and her family.  Campaign ‘Justice for Zainab; has become the top trend globally on social media.

Civil society says had the government convicted the culprits of Kasur child abuse scandal in 2015, Zainab and other minor girls could have been saved from the heinous incident.

Judiciary has been activated after the incident but convincible actions are yet to be taken by the police department.

The end is coming: How ‘Game of Thrones’ broke all records