The World’s Second Most Beautiful Woman is…? 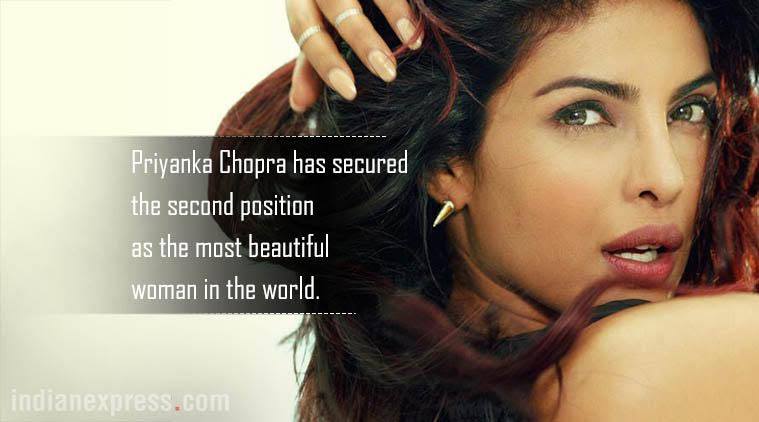 The 34-year-old Bollywood – and now Hollywood – star, Priyanka Chopra, has been ranked as the second most beautiful woman in the world. According to a list published by BuzzNet, when it comes to beauty, Priyanka Chopra falls behind Beyonce and ahead of Emma Watson, Emma Stone, Angelina Jolie, Hillary Clinton, Michelle Obama, and many others.

Being ‘second’ to Beyonce has though not upset her. According to Priyanka Chopra’s tweet, Beyonce was her first too.

Thank u @BUZZNET and all who voted. @Beyonce is my number 1 too!! https://t.co/N6F8syOdsz

Number three spot was clinched by Victoria Secret’s angel, Taylor Hill. Emma Watson was at the fourth spot. Actress Dakota Johnson, who starred in Fifty Shades of Grey, falls behind Emma on number five. The only political figure to be among the top ten beautiful women in the world was Hillary Clinton. She was ranked at number six according to BuzzNet’s list.

Priyanka Chopra has become a well-known celebrity of Hollywood after starring in the movie Baywatch and the TV show Quantico. She has been a part of the music industry as well. My City and Exotic, though not being on the top charts, have added to her fame nevertheless.

Apart from her activities on the screen, she has been involved in social work as well. The world’s second most beautiful woman was named UNICEF’s global Goodwill Ambassador last year. She has been an ambassador in India for children’s charity.

Read more: Bollywood’s Favorite Couple has Broken Ties! – OR Have They?

Priyanka Chopra, through her work and passion, has now become one of the most famous personalities of the world. In her own words,

“My life is pretty much same as everyone else’s, in the sense that I have dreams and ambitions and work very hard to achieve them.”