This is how women should ask for rights

Rather than shouting out indecent slogans, women should raise voice for women who need education, property and social security rights. 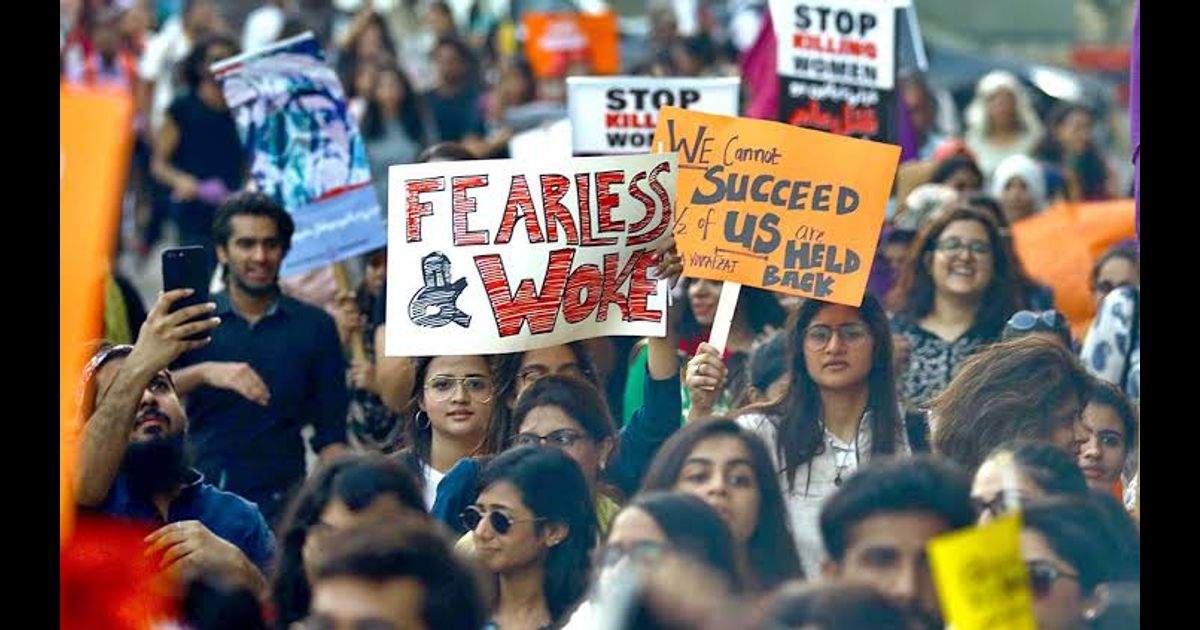 The electronic and social media is flooded with the arguments related to recent women movements. It is not bad to raise voices for the equality between women and men but what is pertinent is, not to deteriorate the social fabric.

Everyone whether it is men, women, or children, has been indulged into the arguments without having a sound knowledge of the rights of both men and women.

It is irony that, this time, Pakistani society has been cleaved into two groups. The one is supporting men, and the other is women. People in homes, offices and streets are talking about it and throw controversial opinions and mould the topic wherever they want to.

Read the banners. Just imagine is this the woman rights. You have spend little time in Pakistan I think u dont understand URDU. But this is not job, Education, scholarship and other basic rights March. pic.twitter.com/0Mn2gzh7lU

Taking the contemporary situation into account, would the prevailing issues be resolved? NO! It wouldprobably tear the societal fabric because of lack of knowledge about what people are actuallydemanding.

It was a western slogan (My Body, My Choice) which was purely demanding some medical and sexual rights of the women but it has wrongly been translated in ‘Mera jisam meri marzi’ in Pakistan which has unfortunately gained a momentum in an appalling way.

The radicals have badly exaggerated its translation. Instead of fighting for the unnecessary rights, what actually women need in this society is: security, employment opportunities, respect, education, and practical implementation of already existing laws which can secure them from harassment, acid attacks, torture and domestic violence, to name a few.

They should fight against these brutalities to get the oppressed women out of this menace first.

A recent report by an NGO, Sahil, states that one women/child-girl experience sexual attack every 7 days. By exploring further, it says that, there are 729 and 575 boys who have suffered sexual abuse of some kind between January-June 2019. The numbers are highly discouraging.

No one will halt them if they come out to march for these prevailing issues rather than walking on with awkward writings on the placards.

Thoughts are hovering over my mind that where are they (the marchers) when Zainab and Farishta were raped and murdered? and where are they when girls are attacked with acid?

8th March woman's day…
Their is no woman's day needed in Islam. Islam already gives all rights to woman. Male is really supposed to control their female because Quran pak made male dominated. In Pakistan they have to live under Islam because this is an Islamic society… pic.twitter.com/wlJwdbeQVz

Astonishingly, they are seen openly marching and chanting for their superficial rights. What kind  of independence they wants ‘mera jisam meri marzi’ the only issue left in the society to deal with?

It is apposite to mention that the women organizations were emerged in 1960s in Pakistan tobolster the oppressed women through education, and some political rights against the uncountable cases of acid attacks, domestic violence, dowry issues, honor killing, lack of education and employment opportunities and abductions.

Author, Abdul Hadi Paracha is a former press secretary of Kohat Students Federation and a freelance writer. The views expressed in this article are the author’s own and do not necessarily reflect the editorial policy of Global Village Space.

Previous articleUN warns of upto 25M Job losses due to COVID-19
Next articleWhy have doctors refused to perform their duties in Sukkur?

19 September 2021
Previous articleUN warns of upto 25M Job losses due to COVID-19
Next articleWhy have doctors refused to perform their duties in Sukkur?

‘Naya Pakistan’ and its cornered tigresses

Talal Chaudry to be indicted on contempt charges on March 14