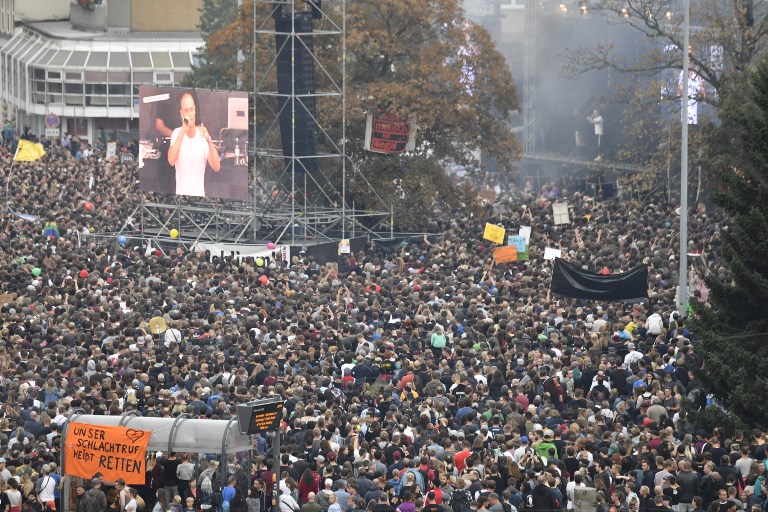 Tens of thousands of people thronged an anti-racism concert Monday in protest against xenophobic mobs that ran rampage in the city of Chemnitz, as Chancellor Angela Merkel urged Germans to stand up against the far right’s message of hate and division. Chemnitz, in former communist Saxony state, was flung into the spotlight as far-right protesters went after foreign-looking people in violent demonstrations last week against the fatal stabbing of a man, allegedly by an Iraqi.

After a weekend of protests in which right-wing extremists vastly outnumbered counter-protesters, a huge crowd estimated by city authorities as 50,000 people massed by early evening at the Chemnitz free concert Monday. Bearing anti-racism posters, many chanted “Nazis out” at the gig, featuring several punk and indie bands under the motto “there are more of us”.  Earlier Monday, Merkel had urged Germans to mobilize against hate.

A “window demo” call has also gone out on social media for those who cannot make it to Chemnitz to hang a colourful poster on the window or balcony to show their support for the anti-racist cause.

Merkel’s spokesman Steffen Seibert said it was understandable that crimes like the knife attack in Chemnitz would provoke sadness and concern among the population. But marches by “violence-prone right-wing extremists and neo-Nazis have nothing in the least to do with mourning for a person or with concern for a city’s cohesion”, he said.

“These people who march and are prone to violence some have also shamelessly shown their closeness to Nazism they stand neither for Chemnitz nor for Saxony overall, nor are they ‘the people’,” said Seibert, referring to a popular “We are the people” chant used by far-right protesters. “We must make that clear to them,” be it through political or legal means, he said. “Every citizen can also raise his or her voice to clearly show them their attitude against hate, against the attempt to divide this country.”

Read more: Hate in the streets has no place in Germany: Merkel

Merkel’s call was echoed by Foreign Minister Heiko Maas, who on Sunday told Germans to “get off our sofas and open our mouths” against xenophobia. Organisers were expecting more than 20,000 in Chemnitz, but that had been far exceeded by early evening, with police saying that 5,000 people have arrived for the concert by trains from Leipzig alone, Saxony’s biggest city.

“It’s not about a fight pitting left against right, but everyone with normal decency regardless of their political stripe standing up against the far-right mob,” said Campino, the lead singer of punk band Die Toten Hosen. “And it is very important to stop this conduct while it is a snowball and before it becomes an avalanche,” he added.

Railing against Merkel’s liberal refugee policy that led to the arrival of more than a million asylum seekers since 2015, it won dozens of seats in the German parliament for the first time in last year’s election.

Felix Brummer from Kraftklub also said: “We are not under any illusion that you can save the world with a concert. But sometimes it’s important to show that you’re not alone.” A “window demo” call has also gone out on social media for those who cannot make it to Chemnitz to hang a colourful poster on the window or balcony to show their support for the anti-racist cause.

But the criticism of the right-wing extremist protesters was immediately rejected by far-right party AfD, which had, along with the Islamophobic street movement PEGIDA, led last week’s demonstrations.

“An entire state and its people are vilified here in general because there is a distinct and understandable resentment about the circumstances,” Joerg Meuthen, AfD co-chief said at a street festival in Bavaria, which holds a state election next month.  Amid the highly charged atmosphere in Chemnitz, a failed asylum applicant was sentenced to eight and a half years in jail for another fatal stabbing in another case also seized on by the far right’s anti-immigrant campaign.

The defendant, identified only as Abdul D., was sentenced by the juvenile court in the western town of Landau to a jail term over the killing. Abdul D. had admitted to the court to stabbing the girl at a drugstore in the town of Kandel on December 27. Prosecutors believe he acted out of jealousy after the girl broke up with him. The AfD has seized on Kandel case, like the Chemnitz stabbing, to bolster its case against immigration.

Railing against Merkel’s liberal refugee policy that led to the arrival of more than a million asylum seekers since 2015, it won dozens of seats in the German parliament for the first time in last year’s election. Resentment against the newcomers runs particularly deep in Saxony state, where Chemnitz is located. Surveys suggest the AfD is poised to become Saxony’s second biggest party in next year’s regional elections.