The martyrdom of 15 soldiers in the past few months has created doubts regarding the law and order situation in North Waziristan. 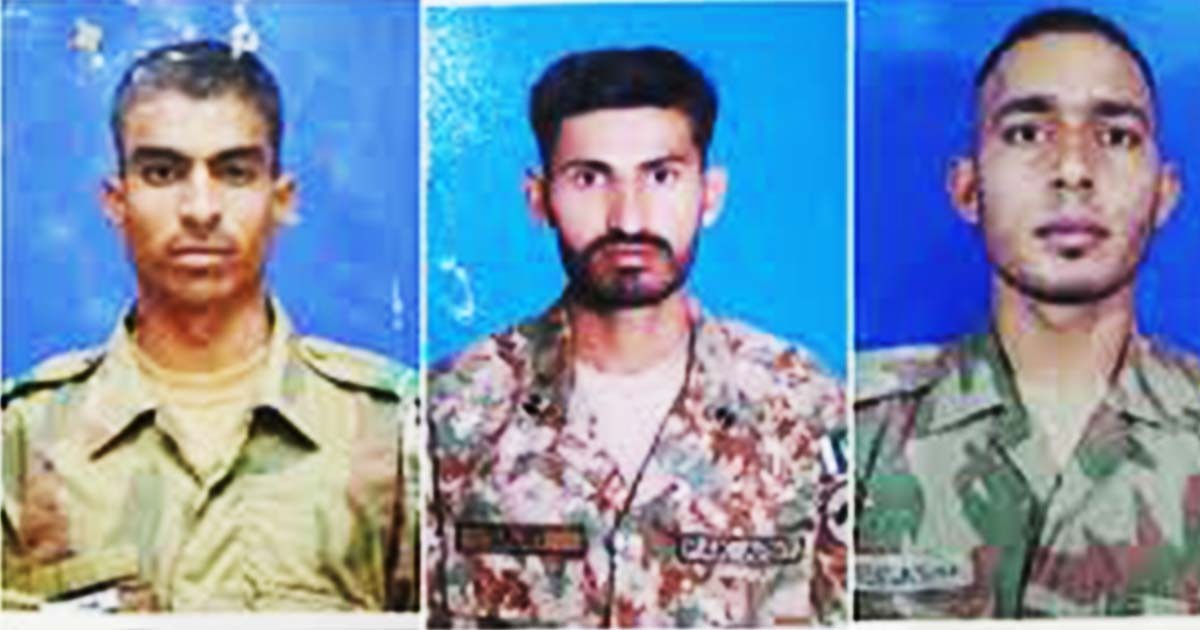 Three soldiers of the Pakistan Army were martyred and another was injured after an explosive device (IED) went off in North Waziristan tribal district, said Inter-services Public Relations (ISPR) in a statement.

The martyred soldiers— identified by the ISPR as Sepoy Sajid, Sepoy Riyasat and Sepoy Babar— were a part of the army’s patrolling team, said the statement. It also added that the military has cordoned off the site of the blast and has started a search operation in the area.

Pakistani forces have also conducted a series of operations against militant groups in the tribal districts if Khyber Pakhtunkhwa over the years. While officers say the area has largely been pacified, small attacks continue to take place.

Since the beginning of this year, there has been reports suggesting attacks on the armed forces and targeting law enforcement agencies. According to the ISPR, more than 15 security forces personnel have been martyred while 35 have been injured in the area in since July, 2019.

Law and order situation deteriorated in Waziristan after a charged mob led by the Pashtun Tahafuz Movement (PTM) leader Mohsin Dawar attacked an army check post and killed one soldier. Similarly, in June, 2019, three officers and one soldier embraced martyrdom in a blast. The martyred officers have been identified as Lt Col Raashid Karim Baig, who was a resident of Hunza’s Karimabad, Major Moeez Maqsood Baig, who belonged to Karachi, Captain Arifullah, a resident of Lakki Marwat, and Lance Havaldar Zaheer, who hails from Chakwal.

Leader of PTM, Mohsin Dawar has reportedly demanded Pakistan army to leave Waziristan. Speaking to a foreign media outlet, he said that he wanted immediate removal of Pakistan army from his area.

Moreover, back in 2014, Tehrik-i-Taliban Pakistan (TTP) that killed many innocent civilians and soldiers also demanded the same thing.

These militants used to hold army troops hostage and then kill them. After years of continuous struggle and sacrifices by the armed forces, Pakistan was able to restore peace across the country. TTP was operating from tribal areas of Pakistan and its safe havens in Afghanistan but was mainly targeting the urban centers in Pakistan.

Mohsin Dawar, who attacked an army check-post in North Waziristan and martyred one soldier, openly threatened the armed forces to leave the tribal area.

"We will free Ali by force. if anything happened to Ali; then I swear you (army) will not get out of Waziristan alive". pic.twitter.com/8UXLIU6Vwp

After Dawar’s statement went viral, analysts shared their opinions and slammed the MNA for pursuing an anti-state agenda under the cover of rights movement. Dr. Moeed Pirzada of 92 News mocked Dawar and said:

Is it true that Mohsin Dawar has demanded withdrawal of US forces from Afghanistan? He is definitely a very brave, courageous & principled man! Isn't he?

Dawar’s demand was not strange for all those alleging PTM to be an extension of TTP and other anti-Pakistan forces e.g. NDS, RAW and CIA. Dr. Hassan Askari has recently noted that it is the global narrative to destabilize countries by using their internal fault lines like identity and religious cards.

In the case of Pakistan, TTP maintained that the tribal areas should be a no-go area for the state of Pakistan. But the army initiated an operation and cleared the area. Pakistan army has made it clear that the achievements gained in war on terror shall not be undone due to anyone’s pressure.

NWTD incident. Innocent PTM supporters / workers need care. Only few are inciting and using them against state institutions for vested agenda. No one will be allowed to undo the gains of decades long national struggle & sacrifices especially of brave Pakistani tribals.

Elections in Tribal Areas: Should Army be deployed on the polling day?

Pakistan Army contingent to be deployed to Saudi Arabia