PM Khan has proclaimed himself as a global ambassador of the Kashmiri struggle for self-determination, and warned that India is planning yet another misadventure in AJK. He vowed that the battle-hardened Pakistan Army will launch a befitting response. 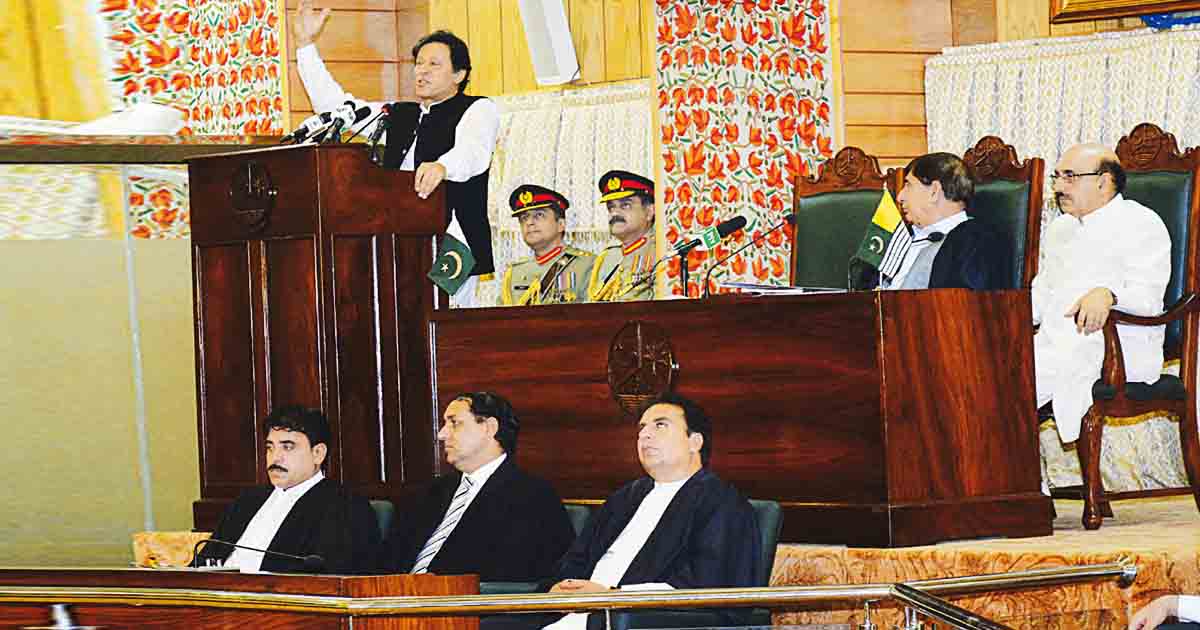 Prime Minister Imran Khan on Wednesday, uncovered the Modi administration’s strategy to attack Azad Jammu and Kashmir (AJK) in a bid to divert the attention of the international community for the intensified human rights violations in occupied Kashmir in the aftermath of the security lockdown imposed by New Delhi after revoking Article 370, which provided special constitutional rights to the disputed Himalayan territory.

Addressing the AJK Legislative Assembly on Pakistan’s Independence Day, celebrated in solidarity with the Kashmiri struggle for freedom, Prime Minister Imran Khan said, “This hate-filled ideology will not stop at Kashmir, it will proceed towards Pakistan.”

Modi, if you try anything in AJK, the time has come where we will teach you a lesson. You have been emboldened for all the wrong reasons for far too long :: @ImranKhanPTI #PakistanStandsWithKashmir pic.twitter.com/Hz0FbHGnO9

The premier continued, “According to intelligence reports, their plan is similar to the plan they carried out in Balakot after Pulwama with a more menacing agenda. They want to take action in AJK to divert global attention away from Indian-occupied Kashmir.”

The Prime Minister observed that Modi has made a massive “strategic blunder” in his bid to alter the constitutional status of the disputed Himalayan valley.

The premier added, “An offensive war is against the teachings of Islam, but whenever Muslims have waged a war to defend their freedom, they have vanquished greater armies.” Imran Khan stated that Muslims do not bow their heads to anyone but Allah.

Failures of the International Community

Prime Minister Imran Khan lashed out at the international community highlighting the failure of global leaders in resolving the escalating Kashmir dispute, which has emerged as a nuclear flashpoint in the region.

Imran Khan said, “If the region goes to war, it will be due to the failure of the global powers and international bodies in resolving the Kashmir dispute as per the UNSC resolutions.” The premier noted that the United Nations must address the grievances of 1.5 billion Muslims who demand the international body to take action against India’s unlawful decision, which has made occupied Kashmir a prison for 10 million innocent Kashmiris.

The premier vowed that Pakistan will address the issue of Kashmir at every single global forum and international bodies, including the International Court of Justice, to obtain support for a permanent resolution of the Kashmir dispute.

Imran Khan highlighted that the Modi administration’s decision to scrape away Kashmir’s special status has garnered the attention of the international community, and now Pakistan must apprise global leaders of the heightened human rights violations in the occupied valley. He said, “The world wants to know the truth about what crimes Modi is hiding by keeping the occupied valley of Kashmir under curfew.”

The premier noted that Kashmiri diaspora will be staging a protest outside the Indian embassy in London on Thursday, the Indian Independence Day, to demonstrate their opposition of New Delhi’s unconstitutional and unlawful annexation of the occupied Himalayan valley.

Imran Khan said, “Tomorrow, the streets of London will witness India’s Independence Day being observed as a Black Day for Kashmiris.” The Prime Minister observed that Modi has made a massive “strategic blunder” in his bid to alter the constitutional status of the disputed Himalayan valley. He said, “We will go to any extent for Kashmir, and we will expose India at every international forum.”

Prime Minister Khan noted that the ideological organization behind Modi’s BJP, the Rashtriya Swayamsevak Sangh (RSS), has been inspired by Hitler’s Nazism, and has been led by a policy of organization, and then ruling the majority. He said, “They want to implement this strategy in Indian-occupied Kashmir. The Indian media is also mindlessly obeying the BJP as the Nazi-inspired aggression scares everyone.”

Paying tribute to the memory of Quaid-i-Azam Mohammad Ali Jinnah, Imran Khan lauded his efforts for the creation of Pakistan and applauded the visionary leader for identifying the scourge of Hindu extremism and liberating his nation. Imran Khan said, “If Quaid-i-Azam had not created Pakistan, then we would all have been victims of India’s fascist rule.”

The premier highlighted that bashing Pakistan was the entire crux of the BJP’s election campaign, and now, Modi has returned to the Prime Ministerial office with a one-point agenda: teaching Pakistan a lesson.

The premier stated that Modi’s decision of revoking the constitutional status of occupied Kashmir is a strategic blunder, which will prove to be “counterproductive” for New Delhi. Imran Khan said that he is now the global ambassador for the Kashmiri struggle for freedom, and the international community will have to listen to their cries for freedom and self-determination.

He said, “Abolishing Article 370 was Modi’s last card, and now the battle-hardened Kashmiris will get their freedom. Modi cannot defeat them.”

Imran Khan observed that Modi’s decision to unlawfully annex the occupied valley has ushered in a paradigm shift in his perceptions of New Delhi. The premier said, “Earlier, I was of the opinion that both Pakistan and India are faced with the mutual problems of poverty, climate change and trade deficits, but the IOK decision reveals that regional prosperity is not on the agendas of Modi.”

The premier highlighted that bashing Pakistan was the entire crux of the BJP’s election campaign, and now, Modi has returned to the Prime Ministerial office with a one-point agenda: teaching Pakistan a lesson. Prime Minister Imran Khan said, “It is time to teach Modi’s India a lesson.”

AJK Prime Minister Farooq Haider also addressed the gathering and noted that Prime Minister Imran Khan’s visit to Azad Jammu and Kashmir has sent a clear message to the occupied valley that Pakistan stands with Kashmiris in their struggle for self-determination.

Previous articleFight men, not women: Bilawal Bhutto’s weird take on Maryam’s arrest
Next article5 Tips for Starting a Company in 2020