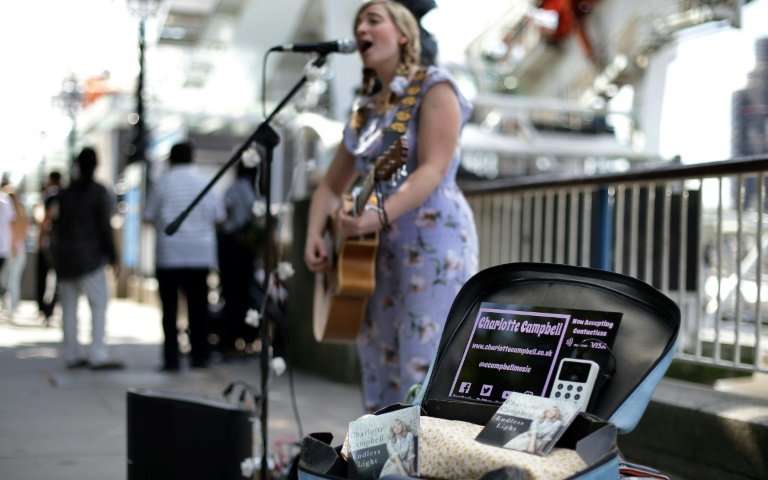 For centuries, London has sustained a street-level economy where performers and vendors make a living from the spare change of strangers but they are being forced to adapt as cash falls out of fashion. Busker Charlotte Campbell, who sings for her supper almost every day in the shadow of the London Eye top tourist attraction, was one of the first performers to use a contactless card reader.

“Things are changing in London and people tend to use cards to pay for things”, Campbell told AFP, before an afternoon gig. “That makes busking a dying art if people aren’t carrying cash anymore.” Between five and 10 percent of Campbell’s income now comes not from coins tossed into her guitar case, but from people tapping bank cards on her reader set up through her phone to debit £2 (2.22 euros, $2.60) at a time.

You know it’s safely and securely going through to your bank account,  no one can take it so it’s much better than having cash from that point of view.”

It’s a rising trend: a report from the British Treasury earlier this year revealed that cash accounted for 40 percent of all domestic payments by volume in 2016, down from 62 percent in 2006. The same report predicted its share of payments would fall to 21 percent by 2026 bringing Britain to the brink of becoming a cashless society. In January, the government spurred the process by outlawing surcharges for using debit or credit cards in shops, removing one of the only significant downsides to digital payments for consumers.

There are other signs in the British capital that businesses are cashing in by banning coins and notes. A number of lunch spots in the City of London the epicenter of the country’s finance trade now warn customers with prominent signage that they are entirely cash-free. Others assume that card payment is the default at the check-out.

Read more: Why we want cash not cards for daily transactions

And some street vendors of The Big Issue magazine part of a charity scheme to lift people out of poverty and homelessness have also taken to carrying contactless readers to attract passersby who are not carrying cash. At Christ Church in East Greenwich, in southeast London, helpers still pass around traditional tithing bags to collect donations from the faithful during Sunday service.

But Reverend Margaret Cave has also been recently deploying a contactless card reader to mop up one-off donations from her flock young and old alike. “I’ve taken card payments from our 93-year-old member of a congregation and some of our much younger people,” she said. “You know it’s safely and securely going through to your bank account,  no one can take it so it’s much better than having cash from that point of view.”

But not everyone is sold on the benefits of moving towards a fully cashless country. “The big problems of cashless society tend to be split into three areas,” said finance expert Brett Scott, author of “The Heretic’s Guide to Global Finance: Hacking the Future of Money”. “There’s the surveillance element, that you can be watched; there’s the financial exclusion element, that you might be excluded from the system; and then there’s a whole cybersecurity question,” he told AFP in an interview.

Recent history also seems to vindicate those with concerns about overreliance on card technology. In June, 2.4 million British card transactions were affected by a Visa outage leaving pubs, shops, and restaurants struggling to do business during prime trading hours on a Friday night.

He said banks, card companies, government departments, and financial technology firms have all been engaged in a two-decade-long “cold war against cash”, attempting to convince the public that coins and notes are an unwieldy inconvenience. “In some ways, you can think about this a bit like the gentrification of payment,” he said.

“They’re trying to push all kinds of informal activity or non-institution-based activity into a kind of digital enclosure that can be watched and can be managed by large institutions.” Authorities are keen to move away from cash as the recording of transactions makes it harder to avoid taxes, as well as to finance terrorism.

Read more: Uber gets London licence back for 15 months

But the homeless, refugees and others who struggle to secure bank accounts could be shut out of this new economy, Scott warned. Recent history also seems to vindicate those with concerns about overreliance on card technology. In June, 2.4 million British card transactions were affected by a Visa outage leaving pubs, shops, and restaurants struggling to do business during prime trading hours on a Friday night.