Opinion: To Subdue China US might start Arms Race between Pakistan & India

"Kem Chho Trump!". During the visit of President Trump to India, America may be looking after its own interests but any defense trade deal between the both would start an arms race that could prove disastrous. But in a bid to subdue China, the US might be willing to start this deadly race. 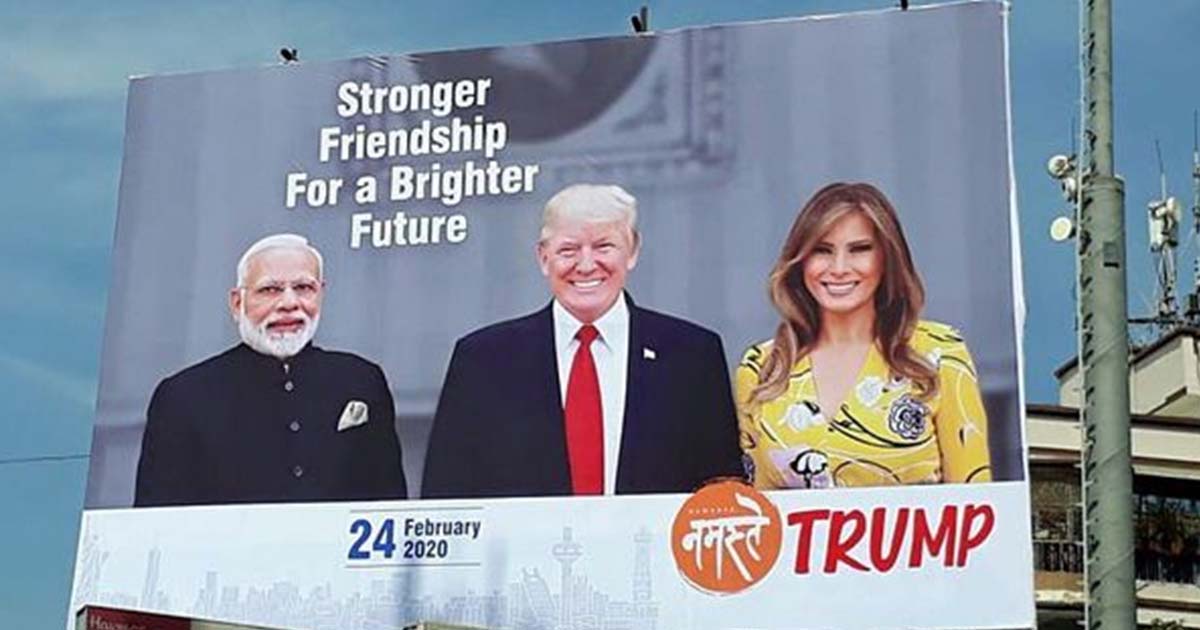 As US President Donald Trump‘s maiden visit to India draws near, the country is racing, desperately, to erect walls to cover up the city’s slums and hide these unseemly sights. The Indian government also seems to have taken a page out of Greta Thunberg’s book and is planting trees to give the White House’s incumbent president a clean and green welcome, as part of their “beautification and cleanliness” drive.

President Trump’s two-day visit will begin on the 24th of February. Once his plane touches the ground in Ahmedabad, he will be hurried off to a number of busy events, including a visit to Gandhi’s residence via a ten-kilometer roadshow, and an Indian version of “Howdy Modi” dubbed “Kem Chho Trump!” (Howdy Trump). From the outset, it is a trip that promises to be heavy on the optics, but beneath the plastered smiles simmer questions of what each side wants out of it and how much the other is willing to give. The Indian media, as it is wont to do, in all its sensationalist glory, has already declared the visit a historic success.

With the geopolitical alliances of the world shifting, and the relations between China and the United States of America growing increasingly tense, as witnessed during the US-China trade war, America’s attacks on the Belt and Road Initiative and China Pakistan Economic Corridor, and generally frosty ties during the Trump administration, America is drawing on it’s Cold War strategy and siding with India in a bid to “contain China”.

On the surface level, the policy may seem to be one that tries to maintain a balance of power in the region by strengthening one large Asian country to counter another, by taking India to be its ally as a caution to China, or even to possibly play the two Asian tigers against each other in the future. However, what America is inadvertently doing is causing friction by exacerbating the tense situation in an already volatile region. And the tension is present in India’s northern region as much as it is in its western region.

Read more: ”We are not treated well by India,” Trump responds about trade deal

While India hopes for a trade deal with America to be the outcome of President Trump’s visit, its sights are more so set on the military helicopters it could acquire for the Indian Navy as well as other military equipment. This is, obviously, a step that both antagonizes and worries Pakistan.

Pakistan has already objected to such a step by declaring America’s decision to sell an integrated air defense weapons system to India as “disturbing”. This development would disturb the strategic balance in South Asia and destabilize the region which would have alarming security implications for Pakistan. It could lead to an arms race between the two nuclear-armed countries, which is something the world cannot afford, especially with the fascist RSS-inspired BJP at the helm in India.

Of two nuclear enemy nations, America should not favor the violent, menacing one only to keep China in check

Pakistan has already made America aware of India’s aggressive policy designs and human rights violations in Kashmir. With the upcoming high profile visits, India could possibly carry out false flag operations to divert aim from the appalling situation in Indian Occupied Kashmir. President Donald Trump has offered to mediate between the two countries on the Kashmir issue. It is high time he holds fast to the promise he made, and deliver, by bringing up the issue during his visit to India.

America may only be looking out for its own interests regarding China during the Indian visit, but President Trump needs to look beyond the myopic “fateful triangle” of these three nations and take the situation of the oppressed Kashmiris and Pakistan’s reservations into account. Pakistan has the misfortune of being next to a trigger-happy neighbor, with the gun placed in the Modi regime’s hawkish hands, and if America provides them the bullets, Pakistan will be left with no choice but to draw its own weapons, and the world would be all the more dangerous.

Read more: Why Trump is Not Signing any Trade Deal with India

Such a situation could lead to disaster, therefore, in spite of how seemingly sweet the cloying words of the duplicitous BJP may be, President Trump should refrain from taking part in any deal that would make this region of the world unsafe. Of two nuclear enemy nations, America should not favor the violent, menacing one only to keep China “in check”. Such a move could have disastrous consequences for the whole world.

Rimal Irfan is a freelance writer and has a degree in Political Science. The views expressed in this article are of the author’s own and do not necessarily reflect the editorial policy of the Global Village Space.

Kashmiris are living a long nightmare of Indian colonialism