Political leaders all around the world have been known to promise something and then forget. Lying has become a major part of politics. But the author differentiates between lying a higher form 'Bullshitting' to which each Pakistani is now accustomed to. 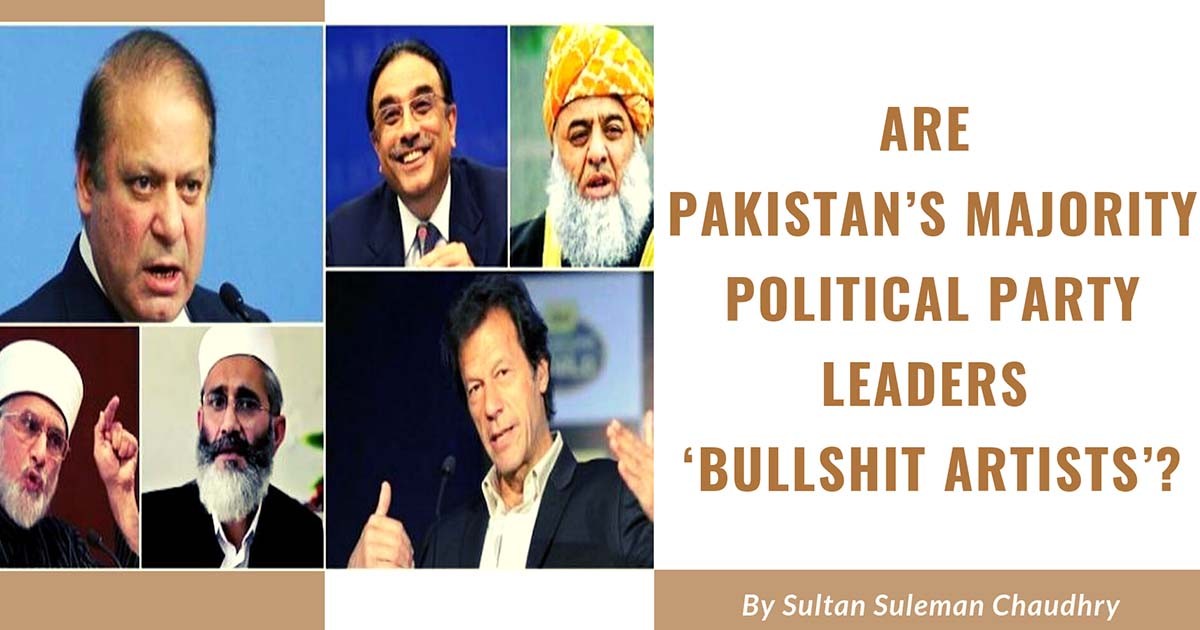 We need to clearly understand the impact of not just lies but bullshitting has had on our political landscape because it has created a deep divide within the society, where we can neither tell the difference between right or wrong, moral or immoral, truth or lie.

Subsequently, we as a nation have become very impatient, restless and irrational not just in our daily chores but also in our thinking and how we approach things in life.

Generally, impatience in society grows due to technological advancements and systems that deliver instant results. But in Pakistani society, the main cause of this impatience with the masses is due to lack or erosion of democratic systems of past and present that has repeatedly been unable to provide basic amenities and facilities to the people.

Furthermore, most of the political leadership in Pakistan always made big promises before coming into power but when do, unable to fulfill those promises.

Let for instance take the current government of Imran Khan that is facing so much pressure from media, general public, business community and the opposition parties for not delivering on their promises and any tangible results. Some segments of the society and the opposition parties already consider the current government a failure even though only being in power just over a year.

I personally to some extent do not blame some segments of the society who demand results after a year even though it’s not possible, but because Imran Khan himself before coming to power while in opposition made many tall claims and that he would change the fate of Pakistan within first 100 days for the better but unable to do so yet.

So my opinion is that as a society we have become desensitized to what’s it likely to literally wait for things to shape place and simply give time to let the government do it’s work.

All this is a glaring example of what we do in our daily lives as a society and really shows how we deal and interact with others in life where chaos and uncertainty is rampant.

All this has led to impatience and we are not even able to listen difference of opinion from others with calmness. Because of this chaos and division people now trust their political leadership without questioning them or their motives leaving no room for democracy to grow in it’s true form and the country to prosper as a result.

According to him, “It is impossible for someone to lie unless he thinks he knows the truth. Producing bullshit requires no such conviction. A person who lies is thereby responding to the truth, and he is to that extent respectful of it.”

He further adds on “for the bull-shitter, however, all bets are off…”

He does not reject the authority of the truth, as the liars do, and oppose him to it. He pays no attention to it at all. By virtue of this, bullshit is a greater enemy of truth than lies are.”

I believe why these bullshit artists are on the rise and got away with anything in the last couple of decades because they did not genuinely enter into politics for serving the general public but even if they did initially.

But when they came in power found out how much money they can make and able to get away with it easily by manipulating the system and people, it became a regular trend.

As governments to governments changed hands one thing did not change is that the political elite always had their own interest in mind and they amassed more wealth and power over time. But no matter what they always protected each other interests in times of difficulty such as now how the opposition has teamed up now against the current government of Imran Khan.

Hats off to Pakistan's Legal System. A convicted person who is serving term in jail can head a political party. How the instructions are passed outside is now anybody guess.
~all elite is one when it comes to their own survival….

Having said that the country did not prosper, as it should have because most of the ministers were not professional in their fields. Even when they failed or did good (which is very rare) they talked bullshit without any facts and solid figures backing their claim and make the public believe or trust them without questioning the details.

Sadly, the common person having his own problems to look after did not care much and got used to bullshitting as they cannot distinguish it from the fact or truth. In the end, truth is what is told to them by the political elite.

Over the course of time, our politicians apparently have become very impressive in making different assertions to the general public as relevant and true but indeed they are simply empty and impassive. The general public mind has been fed with this political fodder for decades and as a result, to some extent, it has become part and parcel of their daily lives.

We can truly now see the horrific results of bullshitting in our society as how even convicted leaders are portrayed as Heroes of the nation and the ones that are under investigation for political corruption shout top of their lungs that they are framed and their past governments were excellent where everything was all good compared to the present government.

The irony is that most of us tend to believe their bullshit and willing to give them the benefit of doubt, a clean chit or they give a vote of confidence to rule again.

If we as a nation allow these leaders to keep bullshitting us then it can have deep ramifications in terms of further dividing the country and fuel anti-state elements that are already on the rise as well as the Kashmir issue.

This divide and attitude will further expand the ongoing economic crisis, the North Waziristan conflict/issue, Karachi issue, the Balochistan issue,  the reference against Justice Qazi Faez Isa (even if the reference is filed right or wrong why all the legal fraternity going up in arms against the government), the accountability process and civil military relations to such an extent that all the institutions become weak or the system crumbles to the extent that it only delivers the desired results for the bullshit leaders where they are not held accountable for their past misdeeds/political corruption and on the other hand serve Pakistan on a platter to foreign powers and they may do as they wish.

Having said all that it’s not only the past governments to be blamed for the mess we are in now but also the present government of Imran Khan has to take some of the responsibility.

The present government could have prevented some of the things being blow out of the proportion such as the current economic crisis, the anti corruption drive with all ministers chipping in even it’s not their jurisdiction by taking early and corrective measure and government opening too many fronts that it can’t handle on its own. Unless Imran Khan himself takes a firm stand against bullshitting within his own cabinet, eliminates conflict of interest people from his government and induct the right people to lead the economic recovery, things are not going to get better any time soon and there will be questions that need answering from the government.

We as a nation are at such a breaking point where the masses are not only willing to believe anything but the worse part is that the masses themselves sell this fodder to others in their personal and professional lives to make their ends meet by any means.

But even in this chaos where everyone has put their cards on the table, if we are unable to figure out who is who and cannot distinguish between the bullshit and the righteous then we know who is winning.

Nevertheless know that it’s not our systems or institutions that are weak rather it’s a human weakness.

Tayyib Erdogan: A New Turkish Sultan and A Caliph in Making