BJP's Hindutva ideology is nothing more than a "hangover" for the centuries of Muslim rule in India. It attempts at evening the score by catapulting RSS stalwarts into mainstream politics and is seen as revenge for Muslim rule. 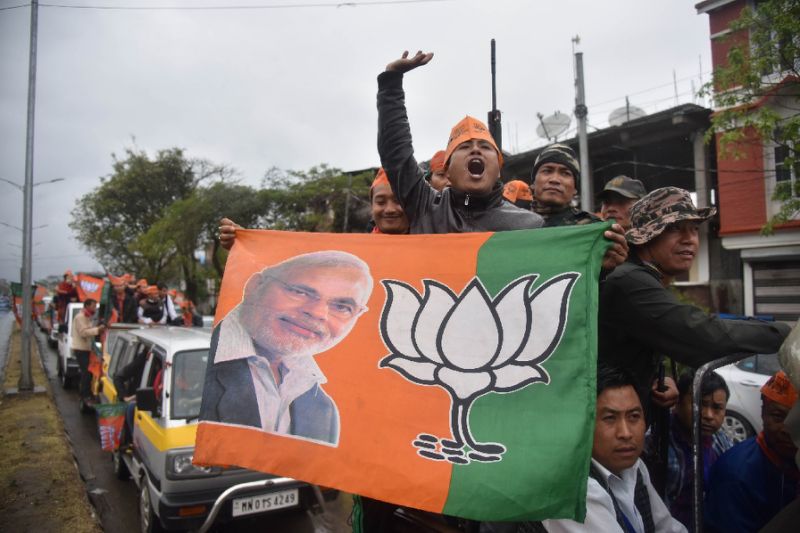 Modi is not wrong in heralding the spectre of Akhund Bharat, currently resting in the Reich of Hindutva. He is not wrong in fancying a land of pure enchantment where everything -even every artefact of nature – is turned Hindu. The aspiration for such glory emanates from pure dejection and centuries of rule by Muslim conquerors. Hindutva’s roots lie in Indian history.

This desperation of history is what is fuelling Modi; presenting an India overshadowed by hallucinations of history. Modi has to learn that history is made and not written – one that is made is always written and one that is written is never made.

The striking difference between Modi’s Hindutva and Muslim conquerors is fair play. Muslim conquerors established their might through the fierce show of power to neutralize the subjects, but once they settled their score, they established a state of justice and not discrimination. The fairness with which they dealt their subjects was the main reason why a large number of Hindus embraced Islam for they found social, economic, cultural, religious equality, equity and security. These two characteristics were exemplified by Muslim rulers through their statesmanship and statecraft.

Read more: BJP: Muslims who stayed in India did not do the country a favor

With such a governance structure, their power was never questioned on the basis of religion. The Muslim rulers brought with them the intellectual treasures of Islamic culture, civilization and traditions. The rise of Islamic culture and civilization rehashed and subjected Hindu traditions which were based on discrimination in caste, creed and colour. The social dissociation of the Hindu social system at the behest of an all equal Muslim social system ushered India in a new era of realization.

For centuries they ruled the Indian subcontinent from Kashmir to Meena Kumari and from Chittagong to Kabul through their well-coordinated system of statesmanship. Their phases of rule did not feature any significant Hindu rebellion except for the later small part of Marathas which was controlled by the Abdali king of Afghanistan.

The era from 700 AD up till 1947 makes the Indian history more heroic, not on part of the Hindus, but because of the elemental presence of Muslim episodes. Especially the ones from across the Oxus River. Subtracting the Muslim part from the history of India, would make Indian history listless.

#indianmedia is controlled and bullied by Hindutva, RSS , BJP with their narrative and Ajit Doval propaganda like German media behaved during the Nazis @HamidMirPAK @MoeedNj @dawn_com : truth must be told pic.twitter.com/HpgrX0sQs5— Lord Nazir Ahmed (@nazir_lord) September 15, 2019

Muslim dominance of more than 1200 years is what the quakes of BJP are trying to rewrite and re-narrate; an attempt destined to fail. The Hindutva, which Modi is exposing, is a creature less than the age of 60 years with complete abstraction at the core. History fails to testify anything like Hindutva as a good strategy. This makes it a complete work of fiction, something that deceives realism and reality in both aspects of being tangible and reliable.

Recorded history as much as it is yet recorded, shows that no system that has ever been based on socio-economic injustice and racial-religious discrimination has lived any longer than a few decades. Whereas, the Muslim glory of ruling India is a consistent chapter of hundreds of years. The Hindutva, on the other hand, as unleashed by the hounds of BJP is, showing all the signs of utter failure and rejection. Even within the Indian people, the abhorrence towards such staunchly religious ideology is well picked up. The ideology is cracking the Indian state from within.

Read more: How is BJP’s government weaponizing COVID-19 against Muslims in India?

Hindutva leading to implosion in India

The social intolerance exhibited in the Delhi carnage is one mere instance. The Kashmir front is becoming volatile with the freedom movement getting stronger. The grand Indian design of Asia’s diplomatic circumnavigation is now limited by the movement of troops along the LOC. The social fabric of Indian unity is shaking and the secular trust is being compromised at the expense of reactionary Pundits. This is what is pouring out of the factious Hindutva ideology – which for all scientific reasons cannot even be strictly called an ideology. It is the reaction of history being remodelled as the revenge of nations postulated by the BJP.

The Muslim glory is what irks the Modi led BJP . while the common Indian celebrate Indian history as it is and not as it ought to be. Modi has to work harder than he is to make India great again, as it once was under the Muslim Rule. At present, it is an ideology of fiction paranoia.