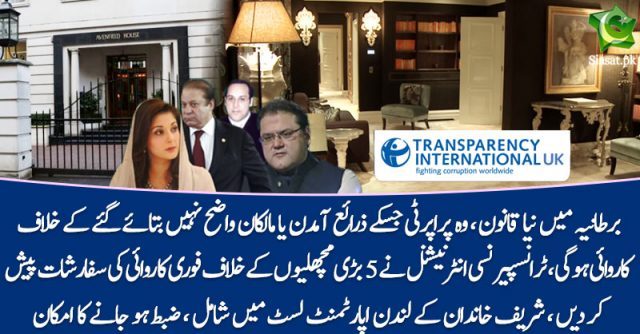 According to media reports, the organization, which combats corruption around the world and prevents related criminal activities, has said an official probe needs to be launched by the Theresa May-led UK government into four estates held by Sharif, according to an official statement.  The non-governmental organization (NGO) has demanded that the British government should not allow the Sharif’s to take refuge in England.

Read more: Verdict in Avenfield reference to be announced on July 6; challenges…

Transparency International has demanded proceedings to seize any properties found to be obtained through corruption-related funds. The Avenfield properties reference was one of three filed by the National Accountability Bureau (NAB) last year in light of the Supreme Court’s verdict against Nawaz in the Panama Papers case. The reference pertained to the ownership of the Sharif family’s apartments at Avenfield House, London.

Nawaz’s daughter Maryam was sentenced to eight years with a £2 million fine (Rs335 million) and his son-in-law Captain (retd) Safdar Awan was given a one year sentence without any fine. Following the verdict, Maryam and Safdar stand barred from contesting the July general election from Lahore and Mansehra, respectively.

According to analysts, this move would curtail the freedom of movement of Sharifs and will force them to stay in Pakistan and face the courts.

Does the government really want to bring Nawaz Sharif back to Pakistan?

Surrender was never an option for Nawaz Sharif