What the world is sure to get from Trump's speech is a rundown of his successes with the powerful US economy. "We'll say the United States is the greatest country in the world. It's never been stronger and it's never been better," 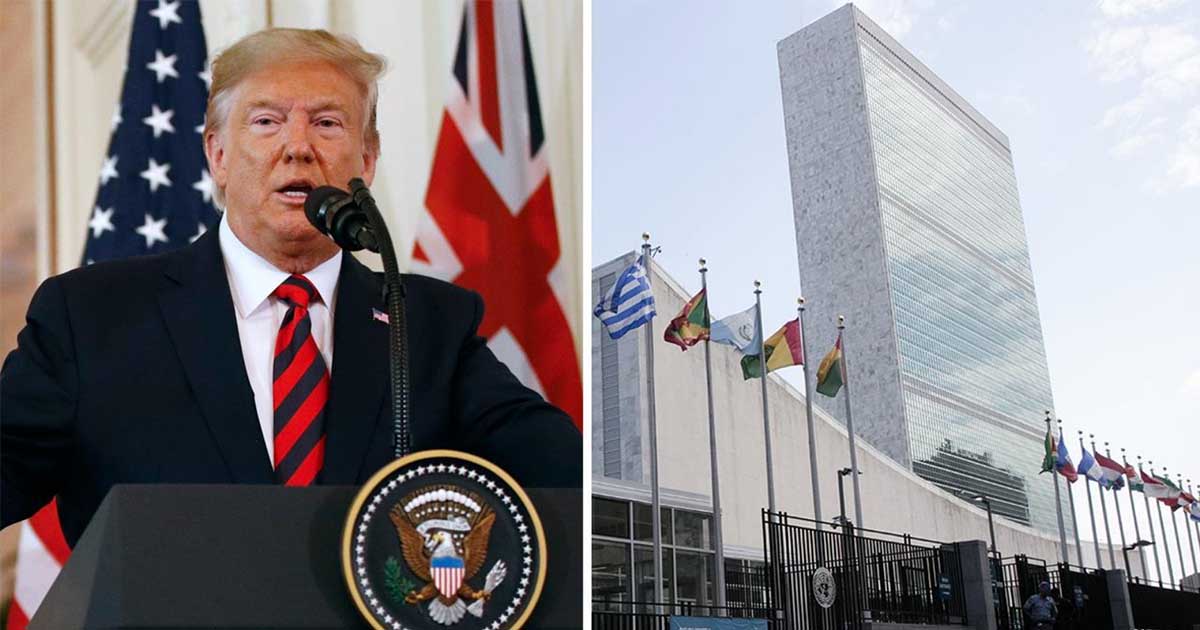 US President Donald Trump will try selling his tough Iran policy in a speech to the UN on Tuesday, but the bid for international leadership will be overshadowed by growing political scandal at home. “We’ll be talking about Iran,” Trump told reporters about his speech at the UN General Assembly in New York.

Saying his administration had already put “a lot of pressure” on Tehran, he hinted at new measures in the US campaign to end Iran’s nuclear technology programs and, more generally, to curb the country’s power in the Middle East.

Trump insists that his all-or-nothing approach is needed to break decades of unfair trade practices by China.

“A lot of things are going to happen,” he said. “A lot more than you would know. A lot more than the media knows.” For all the tough talk, speculation persisted that Trump might somehow still meet with Iranian President Hassan Rouhani at the UN, something that appeared to have been ruled out in the wake of an attack on oil facilities in US ally Saudi Arabia.

President Trump on #Iran: "Number one state of terror in the world." pic.twitter.com/kPo4M9iIFD

“I never rule anything out,” Trump said Monday. The US president’s speech to the UN General Assembly is always one of the highlights of the world body’s annual get-together. But Trump is an awkward fit at an organization designed to collaborate over the planet’s problems.

That’s all the more so as his 2020 reelection battle intensifies and the former real estate businessman strengthens his nationalist, “America first” message. Trump, who opposes any attempt to cut carbon emissions, largely snubbed the chief event of the opening day Monday, a summit called by the UN secretary-general on global warming.

Although he did attend, having previously indicated he wouldn’t come at all, Trump left after less than 15 minutes and did not speak, before hosting his own conference on religious freedom.

The two top economic superpowers’ exchange of massive tariffs has spooked markets around the world.

Adding to the turmoil around the lightening rod US leader, he faces new threats of impeachment from Democrats over claims that he pressured Ukrainian President Volodymyr Zelensky to dig up dirt on his possible 2020 election opponent Joe Biden.

Trump, looking very red, basically admits he asked Ukrainian President Zelensky to look into Biden during call that's part of whistleblower complaint: "It was largely [about] fact that we don't want our people like VP Biden & his son creating to the corruption largely in Ukraine" pic.twitter.com/2hvkTbHSJl

Everywhere Trump went at UN headquarters on Monday, he faced questions from reporters about the controversy. Trump says he did nothing wrong, although he admits talking to Zelensky about what he says was corruption by Biden’s family.

Read more: Trump did not carry out his threat on Iran last time – what will happen now?

A meeting scheduled with Zelensky on Wednesday will come under close scrutiny. The mounting furor back in Washington clearly wore on Trump, who is under pressure to release transcripts of his phone calls with the Ukrainian leader.

Trump angrily called journalists “crooked as hell,” Biden “corrupt” and claimed that members of his Republican party would get “the electric chair” if they were as bad as he claimed Biden was. Airing another grudge, he complained about not having been awarded a Nobel peace prize, saying he would have, many times over, “if they give it out fairly.”

That’s all the more so as his 2020 reelection battle intensifies and the former real estate businessman strengthens his nationalist, “America first” message.

What the world is sure to get from Trump’s speech is a rundown of his successes with the powerful US economy. “We’ll say the United States is the greatest country in the world. It’s never been stronger and it’s never been better,” he said ahead of the UN bash.

Last year, Trump boasted that he had “accomplished more than almost any administration” in US history. Diplomats laughed. This time, Trump will have his work cut out justifying his high-stakes trade war with China and reassuring partners.

The two top economic superpowers’ exchange of massive tariffs has spooked markets around the world. Trump insists that his all-or-nothing approach is needed to break decades of unfair trade practices by China.

And he says that US tariffs on hundreds of billions of dollars of Chinese exports have forced Beijing to come to the negotiating table. “China wants to make a deal.  They have a lot of people that don’t have jobs now because their supply chain is broken,” he said.

Previous articleA quarter of Mumbai could drown by 2100
Next articleRestart Taliban talks, do your duty on Kashmir, Khan tells Trump

20 September 2021
Previous articleA quarter of Mumbai could drown by 2100
Next articleRestart Taliban talks, do your duty on Kashmir, Khan tells Trump