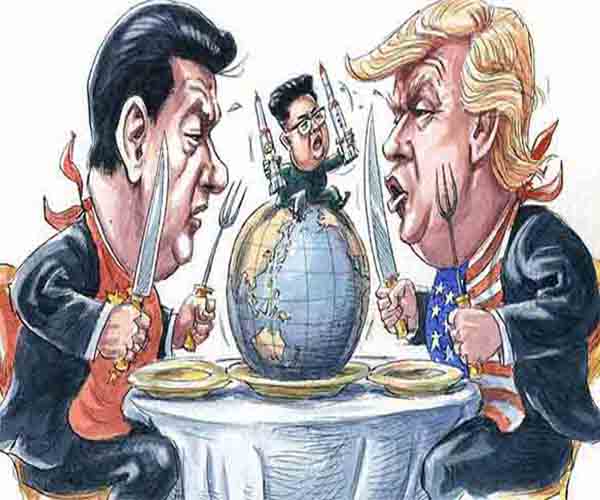 On the eve of the ASEAN summits in the Philippines, diplomats from the United States, Japan, Australia, and India met in Manila on Sunday to discuss the issues of security and stability of the Asia-Pacific region. The only precursor to the quadrilateral format in Asia-Pacific – American slang is “Quad” – was when these four countries (plus Singapore) held a similar meeting in May 2007 – coincidentally, in Manila on the sidelines of the ASEAN Regional Forum.

Singapore was absent from Sunday’s event. It probably dropped out. Singapore is reviewing its China policies (despite the strong alliance with the US). It hopes to be a regional hub in China’s “Belt and Road Initiative”, and as the chairman of the ASEAN through next year it plans to calm the disputed waters of the South China Sea.

No joint statement was issued after the Quad on Sunday, leaving it to the four capitals to issue press releases. Nuances, inevitably, crept in, which provide useful pointers.

India always sought to harmonize with the ASEAN consensus rather than create a counterpoint or an alternate narrative.

Unsurprisingly, the press releases issued in Washington and Tokyo were particularly assertive. The US referred to “quadrilateral partners”, while Japan claimed that the Quad meeting “discussed measures to ensure a free and open international order based on the rule of law in the Asia-Pacific.”

In a major policy speech on India last month at the Centre for Strategic and International Studies in Washington, US Secretary of State Rex Tillerson came close to the US to favoring a regional security architecture through “greater engagement and cooperation” amongst “Indo-Pacific democracies”. But then, he added, “it is going to be an evolving process”.

China’s growing pre-eminence in the Asia-Pacific worries all four countries, which met in Manila on Sunday, and the recent party congress of the Chinese Communist Party in Beijing wouldn’t have eased the angst. Having said that, their priorities vary.

The last thing Delhi wants is to be hustled into a bloc that restricts its ability to maneuver in the present volatile environment. India retains strategic options, too, which includes engaging China bilaterally. After all, the $235 billion business deals, which President Donald Trump secured during his recent “state visit-plus” to China, carries a big political message that ‘America First’ dominates the US’ foreign policies.

The salience of the APEC summit in Da Nang is that other than ‘America First’ in trade, Trump administration lacks a comprehensive regional strategy.

The big question, therefore, is: How consistent are the Trump administration’s Asia-Pacific policies? Both Trump and Tillerson say nice things about India to promote US business interests, especially exports of weapons and shale oil, which create jobs in America. Arguably, Tillerson at times speaks like a strategist, but then, Trump must be believed that it is he who makes policies – not Tillerson. And Trump is obsessed with transactional diplomacy that is consistent with ‘America First’.

India’s strategic dilemma explains the ambivalence that crept into its press release on the ‘c’ event. Delhi says that the diplomats held “consultations”. While the discussions focused on “cooperation based on their converging vision and values” as regards peace, stability, and prosperity of the “interconnected region”, they agreed that “a free, open, prosperous and inclusive Indo-Pacific region” is in regional and global interest. Besides, they also “exchanged views” regarding terrorism, proliferation linkages and on “enhancing” regional connectivity.

Most important, the press release issued in Delhi underscored that India’s Act East policy will remain the “cornerstone of its engagement” with the Asia-Pacific.

Evidently, Indian diplomats are in the wait-and-watch mode. The Indian press release conspicuously refrained from using the word “commitment” in any context – unlike the US, Japanese and Australian versions. Nonetheless, Delhi will seek to create synergy out of the “Quad” event. Why not?

No joint statement was issued after the Quad on Sunday, leaving it to the four capitals to issue press releases. Nuances, inevitably, crept in, which provide useful pointers.

In immediate terms, India is hosting the Russia-India-China format at foreign minister level, possibly on December 11. There is bound be a “bilateral” between India’s External Affairs Minister Sushma Swaraj and the visiting Chinese Foreign Minister Wang Yi. Delhi’s focus will be on carrying forward the spirit of consensus at the leadership level to get the India-China relationship on the right track to pursue “healthy stable bilateral ties” and to ensure that “differences don’t become disputes”. Like the tramp in Samuel Beckett’s famous play, Delhi is waiting for Wang.

Quite obviously, the US and Japan are in some hurry to “lock in” India within an exclusive US-led regional format, which to some extent would mitigate their growing isolation due to the steady deepening of ties between the ASEAN countries and China.

Delhi’s focus will be on carrying forward the spirit of consensus at the leadership level to get the India-China relationship on the right track to pursue “healthy stable bilateral ties”.

Incidentally, Singapore hopes to initiate ASEAN-China naval exercises in the disputed South China Sea next year and to finalise the code of conduct to navigate the territorial disputes. Clearly, events are outpacing American (and Japanese) diplomacy and making these countries look tired, listless and unimaginative. The salience of the APEC summit in Da Nang is that other than ‘America First’ in trade, Trump administration lacks a comprehensive regional strategy(Read my blog APEC signals US’ waning influence in Asia.)

On the other hand, stoking the fires of regional tensions for geopolitical purposes is not what India’s Act East policy has been about. India always sought to harmonize with the ASEAN consensus rather than create a counterpoint or an alternate narrative. (The press releases on the Quad meet are here, here, here and here.)