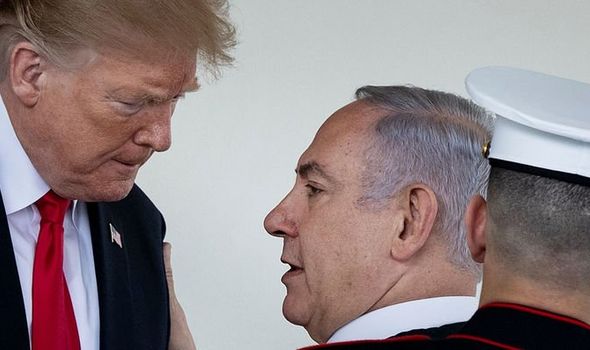 Forced to acknowledge that Iran is complying with the nuclear agreement it concluded two years ago with the world’s major powers, US President Donald J. Trump appears to be groping for ways to provoke Iran to back out of the deal. If successful, Mr Trump could spark a nuclear arms race in the Middle East at a time that a Chinese agreement to build a drone manufacturing plant in Saudi Arabia could initiate a similar drone race that threatens to take hostilities in the region to a whole new, more dangerous level.

The outcome of May 12 elections in Iran could play into Mr Trump’s hands if a hardliner rather than incumbent President Hassan Rouhani were to emerge victoriously.

As a result, Mr Trump, who has described the nuclear agreement as “one of the worst deals I’ve ever seen” and vowed to “dismantle” it, has since come to office has taken steps to lower incentives for Iran to continue to adhere to the accord. The outcome of May 12 elections in Iran could play into Mr Trump’s hands if a hardliner rather than incumbent President Hassan Rouhani were to emerge victoriously.

At the same time, sticking to his desire to remain unpredictable, Mr Trump has not ruled out terminating the agreement. Asked point blank by the Associated Press whether he would stick to the deal, Mr Trump replied: “It’s possible that we won’t.”

Re-imposing US sanctions against Iran that were lifted alongside punitive United Nations measures would stop short of a unilateral termination of the agreement, but leave Iran no choice but to respond

The president, besides charging that Iran has violated the spirit rather than the letter of the agreement and ordering a 90 day review that in the words of Secretary of State Rex Tillerson will “evaluate whether suspension of sanctions related to Iran pursuant to the JCPOA is vital to the national security interests of the United States,” has also aligned the United States squarely alongside Saudi Arabia, which charges that the Islamic republic is the world’s foremost source of political violence. JCPOA is the acronym for the nuclear agreement or Joint Comprehensive Plan of Action.

Re-imposing US sanctions against Iran that were lifted alongside punitive United Nations measures would stop short of a unilateral termination of the agreement, but leave Iran no choice but to respond. It could retaliate with relatively meaningless sanctions of its own, but that would unlikely satisfy hard-line critics as well as a sense that the agreement has so far failed to produce economic benefits for the average Iranian. On the plus side, cooler heads would likely counsel that US punitive action would allow Iran to play the international community against the United States.

Ironically, the staunchest opponents of the nuclear agreement, Saudi Arabia and Israel, have since its conclusion urged the Trump administration not to scrap the deal.

US Defense Secretary James Mattis, on a visit to Riyadh last week, echoed the kingdom’s view of Iran, saying that “everywhere you look if there is trouble in the region, you find Iran.” Mr Mattis went on to say that “it is in our interest to see a strong Saudi Arabia.”

Since coming to office, Mr Trump has stepped up military support for Saudi Arabia’s troubled intervention in Yemen with increased strikes against jihadist targets, a loosening of the US rules of engagement, and a lifting of restrictions on US arms sales to the kingdom because of the high civilian casualty rates in the conflict.

“We will have to overcome Iran’s efforts to destabilise yet another country and create another militia in their image of Lebanese Hezbollah, but the bottom line is we are on the right path for it,” Mr Mattis told the Saudis. Iran has backed Houthi rebels in Yemen whom Saudi Arabia accuses of being Iranian stooges.

Ironically, the staunchest opponents of the nuclear agreement, Saudi Arabia and Israel, have since its conclusion urged the Trump administration not to scrap the deal. Both countries remain critical of the agreement but believe that it has bought them a decade of an Islamic republic deprived of a nuclear weapons capability. That approach has been reinforced by the rise of Mr Trump and his tougher policy towards Iran.

Mr Trump’s high-stakes poker game that will likely embolden Saudia Arabia in what is for the Kingdom’s ruling Al Saud family an existential battle with Iran coupled with Chinese nuclear energy and military deals with Saud Arabia and Iran nonetheless threatens to spark a regional arms race with potentially dangerous consequences.

With the United States refusing to share its most advanced drone technology, China has agreed to open its first overseas defence production facility in Saudi Arabia. State-owned China Aerospace Science and Technology Corporation (CASC) will manufacture its CH-4 Caihong, or Rainbow drone as well as associated equipment in Saudi Arabia. The CH-4 is comparable to the US armed MQ-9 Reaper drone.

The deal could spark an arms race in the Middle East with Iran and other states seeking to match the kingdom’s newly acquired capability to launch strikes from the comfort of a computerised, Saudi-based command-and-control centre without putting Saudi military personnel at risk.

Similarly, China signed an agreement on nuclear cooperation with Saudi Arabia during last month’s visit by Saudi King Salman. The agreement is for a feasibility study for the construction of high-temperature gas-cooled (HTGR) nuclear power plants in the kingdom as well as cooperation in intellectual property and the development of a domestic industrial supply chain for HTGRs built in Saudi Arabia.

The agreement contributes to Saudi Arabia’s effort to develop nuclear energy and potentially a nuclear weapons capability. Saudi officials have repeatedly insisted that the kingdom is developing nuclear capabilities for peaceful purposes such as medicine, electricity generation, and desalination of sea water. They said Saudi Arabia is committed to putting its future facilities under the supervision of the International Atomic Energy Agency (IAEA).

China and the United States are pursuing different objectives in the Middle East and its dominant Saudi-Iranian dispute. In doing so, the two world powers risk however further destabilising the region rather than contributing to ending debilitating disputes, reducing volatility, and putting an end to the large-scale bloodshed.

A recent report by the Washington-based Institute for Science and International Security (ISIS) concluded however that the nuclear agreement with Iran had “not eliminated the kingdom’s desire for nuclear weapons capabilities and even nuclear weapons… There is little reason to doubt that Saudi Arabia will more actively seek nuclear weapons capabilities, motivated by its concerns about the ending of the JCPOA’s major nuclear limitations starting after year 10 of the deal or sooner if the deal fails,” the report said.

China, unlike the United States, has to balance relations with both Saudi Arabia and Iran, with which it has had a far longer military relationship. To do so, China has moved cautiously to restore nuclear cooperation with Iran in the wake of the lifting of the UN sanctions. Iran’s government-controlled Iranian Students’ News Agency (ISNA) reported this weekend that that China had agreed to redesign Iran’s Arak nuclear reactor under US supervision.

China and the United States are pursuing different objectives in the Middle East and its dominant Saudi-Iranian dispute. In doing so, the two world powers risk however further destabilising the region rather than contributing to ending debilitating disputes, reducing volatility, and putting an end to the large-scale bloodshed. As a result, despite their different goals, both powers’ approaches threaten to reinforce one another in putting the Middle East at greater risk.

Anti-Qatar media campaign in the Gulf: Cracks in the Islamic Military Alliance?