Trump and Kim to convene for the second time, hoping for a substantial solution 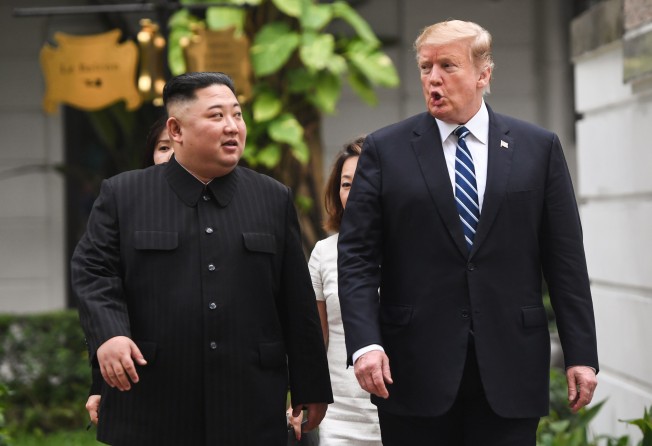 U.S President Donald Trump is about to meet North Korean Leader Kim Jong Un in Hanoi this week to pick up the matter of denuclearization where they left off last year in Singapore. Both leaders–or, at least Donald Trump– would be eyeing to move forward with the process as it has been more than a year without any major development toward denuclearization, something which was agreed in the mutually signed agreement at the end of the summit.

South Korea, which is the direct stakeholder of in the matter and potentially at risk of North Korean missile far more than the U.S would ever be, is feeling left out. In order to make its significance felt, several South Korean delegates including special envoy for North Korea and journalists have already reached Hanoi to make their presence felt and interests are taken into account between the meetings of both leaders.

Last year’s summit where both, President Donald Trump and Kim Jong Un, met for the first time was historic in several ways. It was the most anticipated event of 2018, and many even speculated that it would not turn into reality due to massive differences which both sides have against each other. But the meeting commenced and culminated with positive remarks from both the leaders about each other and signing of an agreement which underpinned the aspiration of a nuclear-free Korea. Salient points which were agreed upon are:

For the global order and security, it is very important that existential and lasting threats like the standoff between the USA and North Kora be dealt with diplomacy rather confrontation.

As it can be interpreted from lexical selection while drafting of the agreement, it revolves more around aspirations and optimism rather the road map toward the endgame. But given the fact that the summit itself was one of a kind, happening for the first time, experts gave both sides a benefit of the circumstances.

But more than half a year has elapsed since then, but still, there has been no implementation over the agreed outcomes other than the remains of U.S soldiers who fought in the Korean War being sent back to the United States from DPRK.

North Korea also made a show of blowing one of its nuclear sites, which once again was obsolete in the opinion of many experts. However, in upcoming summit, it is expected that both sides would work on a framework to move forward with denuclearization process, or else there would not be any leverage given for not reaching a substantial milestone to Donald Trump at least.

Is the Denuclearization of Korean Peninsula Even Possible?

The venue for the second meeting of American and North Korean leaders, Vietnam, has a significance of its own; a country with communist history, having fought the United States of years but eventually reaping the benefits of capitalism and moving toward prosperity. It may precisely be the result which the United States wants North Korean leader to see and adjust the course of its country.

But Nuclear weapons which have been built after years of toil and sanctions would not be easily given away as the North Korean regime deems it the guarantee of its survival. Examples from history where regimes were overthrown with U.S support, such as Muammar Gaddafi, act as a buffer between Kim Jong Un and denuclearization. Even the threat assessment report submitted by the U.S intelligence to Congress last month underscore the apprehension.

For the global order and security, it is very important that existential and lasting threats like the standoff between the USA and North Kora be dealt with diplomacy rather confrontation. But for efforts to bear result, the clarity of thought and intention is very significant otherwise the end result would be a more intense confrontation.

Recent statement from Taliban snubs U.S plans for the region

The abrupt withdrawal of the U.S troops from Syria