Trump brings up Kashmir with Modi 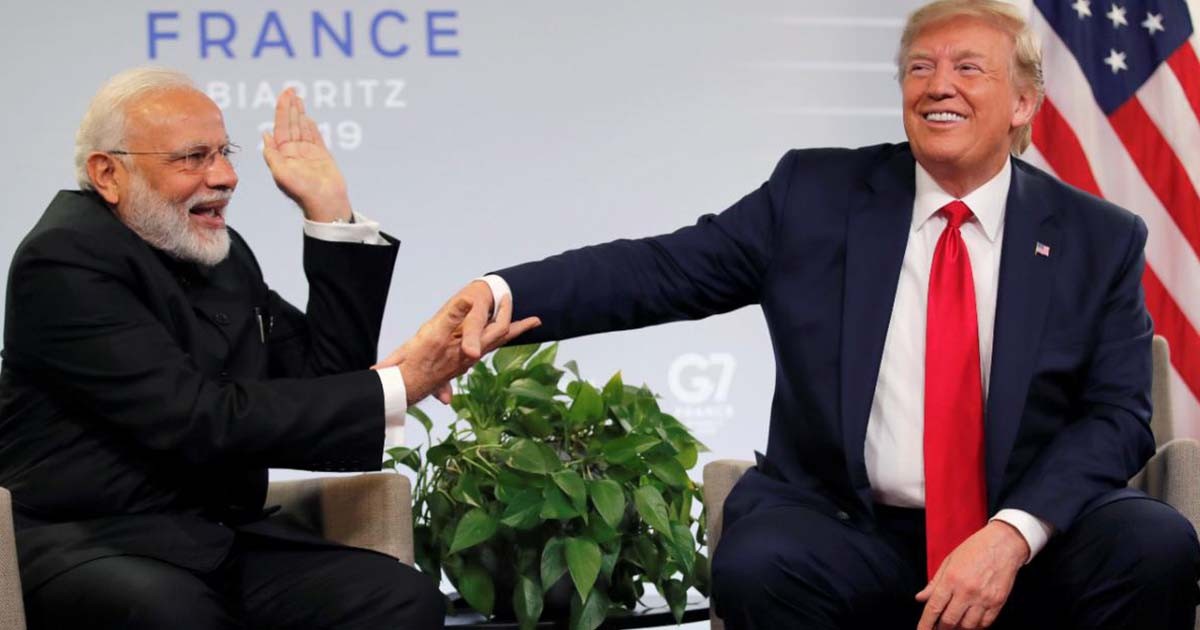 US President Donald Trump said Monday he had no need to help mediate between Pakistan and India over tensions in disputed Kashmir because Prime Minister Narendra Modi feels he has it “under control”.

On August 5 Modi’s Hindu-nationalist government revoked the autonomy of the Muslim-majority territory where tens of thousands of people have been killed in an uprising against Indian rule since 1989, most of them civilians.

Earlier this month, Trump said he was ready to step in, but at a meeting with Modi at the G7 in France, Trump said “the prime minister really feels he has it under control”.

Trump added he and Modi spoke about Kashmir “at great length” on Sunday.

New Delhi’s contentious decision angered Pakistan, which has fought two wars with India over the region, and Prime Minister Imran Khan said Monday he would continue fighting for the rights of Kashmiris.

Jammu and Kashmir Governor Satya Pal Malik on Sunday defended the restrictions, echoing the government which says the curbs are meant to maintain peace in the disputed region also claimed by arch-rival Pakistan.

Khan said he planned to embark on a diplomatic tour soon to raise the issue in international forums including the UN General Assembly in September.

“I will tour the world and tell them what is happening… the Modi government is pursuing a policy which brought havoc globally in the past,” Khan said in a televised broadcast.

(2/3) Prime Minister Of Pakistan Imran Khan Address To Nation On Issue Of Kashmir With English Voice Over (26.08.19)#KashmirAtDecisionPoint@ImranKhanPTI pic.twitter.com/wbK7W4CqpT

“Many Muslim governments, which are not openly supporting us due to their business interests, will sooner or later support our position… It is imperative that we should stand by Kashmiris. We should give a message to Kashmiris that we are with them.”

The Trump-Modi talks came as police said stone-throwing protesters in Kashmir killed a driver of what they thought was a military truck, amid a crippling security lockdown imposed just hours before the autonomy announcement.

The turning of the former Himalayan kingdom of seven million people into a fortress of barricades and barbed wire has not prevented protests and clashes with security forces taking place however.

Read more: Modi, You control nothing in Kashmir: Kashmiris stays firm against India

In the latest demonstration on Sunday in Anantnag district protesters hurled stones at a truck that they believed to be a military vehicle. The 42-year-old driver was struck on the head and died, police said.

The Press Trust of India news agency said two men had been arrested over the incident. India says no civilian has died from police action since August 5. But residents have said three people have been killed, including a young mother who choked after police fired tear-gas canisters into her home.

Multiple hospital sources have said that at least 100 people had been hurt during the lockdown, some with firearm injuries.

Authorities say they have been easing restrictions gradually but a delegation led by key opposition figure Rahul Gandhi was turned away at Srinagar airport on Saturday after flying in from New Delhi to assess the situation.

Regional police chief Dilbagh Singh told AFP Gandhi was turned back because in a situation “getting to normalcy” they wanted to avoid any “controversial statement”.

Jammu and Kashmir Governor Satya Pal Malik on Sunday defended the restrictions, echoing the government which says the curbs are meant to maintain peace in the disputed region also claimed by arch-rival Pakistan.

Ahead of his latest remarks, Trump last Tuesday after phone calls with both Modi and Khan offered to mediate in what he called an “explosive” situation in Kashmir.

“Kashmir is a very complicated place. You have Hindus and you have the Muslims and I wouldn’t say they get along so great,” Trump told reporters at the White House.

Asked about the Kashmir crisis, President Trump says that “Kashmir is a very complicated place. You have the Hindus, and you have the Muslims, and I wouldn’t say they get along so great. And that’s what you have right now.” pic.twitter.com/mss0w8U9Hd

“I will do the best I can to mediate,” he added.

India has insisted Kashmir is purely an internal matter and that it does not want outside mediation.

“Any discussion on Kashmir, if at all warranted, will only be with Pakistan and only bilaterally,” Foreign Minister Subrahmanyam Jaishankar was quoted as saying on Friday.