In an effort to keep the people safe from the killer coronavirus, US President Donald Trump declared himself as a war-time President and ordered to dispatch the navy's 1000-room USNS Comfort ship to fight the coronavirus epidemic. Would this help the infected people to be cured? 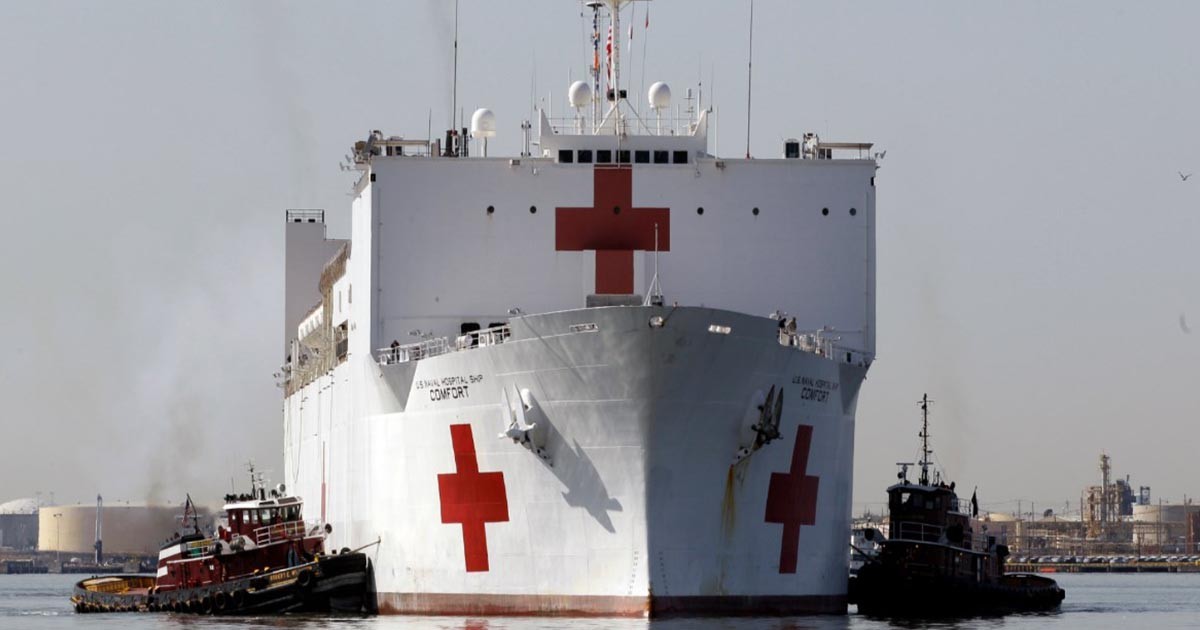 The United States is to deploy military hospital ships to fight the coronavirus, Donald Trump said Wednesday, as he likened himself to a “wartime president” and invoked a Korean War-era law.

As America and Canada announced they were closing their border to non-essential travelers, New York governor Andrew Cuomo said Trump was dispatching the navy’s 1,000-room USNS Comfort to the city’s harbor.

The moves came as the number of deaths in the United States from COVID-19, the illness caused by the new coronavirus, reached 150, with confirmed cases soaring to more than 9,300, according to a Johns Hopkins University tally.

The hospital ship Comfort, promised to NYC, won’t be ready for another “two weeks plus,” SecDef Esper says.

Why didn’t the administration give it the order to start getting ready 2 weeks ago?

This is a foreseeable disaster. https://t.co/G5HEtQ6P84

US stocks suffered deep losses as Trump tried to downplay fears that the unemployment rate in the world’s number one power could spike to 20 percent because of the fast-spreading epidemic.

Meanwhile America’s “Big Three” car makers — General Motors, Fiat Chrysler and Ford — announced that they would halt operations throughout North America through the end of the month.

Cuomo said Trump had told him that the 894-foot (270-meter) Comfort ship would be sent to New York “immediately,” although it was not clear when the military vessel would dock in the US financial capital.

“It’s an extraordinary step,” Cuomo told reporters, adding that it had around 1,000 rooms, including “operating rooms.”

“It’s literally a floating hospital, which will add capacity,” he added at the press conference.

Cuomo said he and Trump agreed on the approach to containing the pandemic which has killed over 8,000 people worldwide and brought cities grinding to a halt.

Trump meanwhile told reporters that he viewed himself as “a wartime president. I mean, that’s what we’re fighting. I mean, it’s a very tough situation here.”

He added that the United States would “defeat the invisible enemy,” and do it “even faster than we thought.

Later in the day, he also signed a $100-billion emergency aid package that ensures sick leave to Americans workers who fall ill from the new coronavirus, in a rare example of congressional Democrats, Republicans and the presidency working together.

Two lawmakers, Florida Republican Mario Diaz-Balart and Utah Democrat Ben McAdams, meanwhile became the first known members of Congress to have coronavirus, announcing on Twitter that they had tested positive.

As well as the Comfort, Trump said that the USNS Mercy hospital ship would also be deployed. The governors of California and Washington state quickly called for it to be dispatched to their shores.

Jay Inslee, governor of Washington, which has been heavily hit by the coronavirus, urged authorities to send it to Puget Sound: “We think that is the right deployment decision because we are the epicenter of this epidemic. And our medical system will be the first one that is stressed,” he said.

Navy Spokesman Samuel Boyle said the boats would not treat COVID-19 patients directly but would assist the treatment of other patients in coastal locations where doctors and nurses are focused on the virus.

A defense department source told AFP that the Comfort’s readiness to sail would be “more like weeks than days.”

Trump also invoked the Defense Production Act, signed in 1950 during the Korean War, allowing the government to compel businesses to sign contracts and thus expand production.

It is expected to help speed up production of protective masks and other equipment for medical personnel.

Elsewhere, the Food and Drug Administration said it was investigating rolling out self-swab kits, where citizens test themselves, and Vice President Mike Pence called on hospitals to delay elective surgery.

Deborah Birx, the coronavirus taskforce administrator, warned of a dramatic increase in cases as testing ramps up in the coming days, and forecast that the number of cases will exceed Italy’s.

“Our curves will not be stable until sometime next week,” she said.

Earlier Wednesday, Trump announced the closure of the US-Canada border to non-essential traffic as the coronavirus epidemic intensified in both countries — but said that trade would not be impacted.

He said he hoped it would open in 30 days, as Canadian Prime Minister Justin Trudeau announced Can$27 billion (US$18.6 billion) in direct aid to help workers and businesses cope with the economic impact of the pandemic.

On Wall Street Wednesday, the Dow Jones Industrial Average was hit by another brutal loss to finish below the 20,000-point level for the first time since 2017 despite authorities in the US and elsewhere moving forward with more measures to prop up the economy.

In New York, Cuomo announced that he was barring all non-essential businesses from having more than 50 percent of the workforce work outside of their home.

Previous articleAfghan prisoners swap must begin as soon as possible: asserts Khalilzad
Next articleUN warns of upto 25M Job losses due to COVID-19

This blood test can diagnose 50 different types of cancer

NLC on forefront to transport relief goods amid Covid-19 lockdown