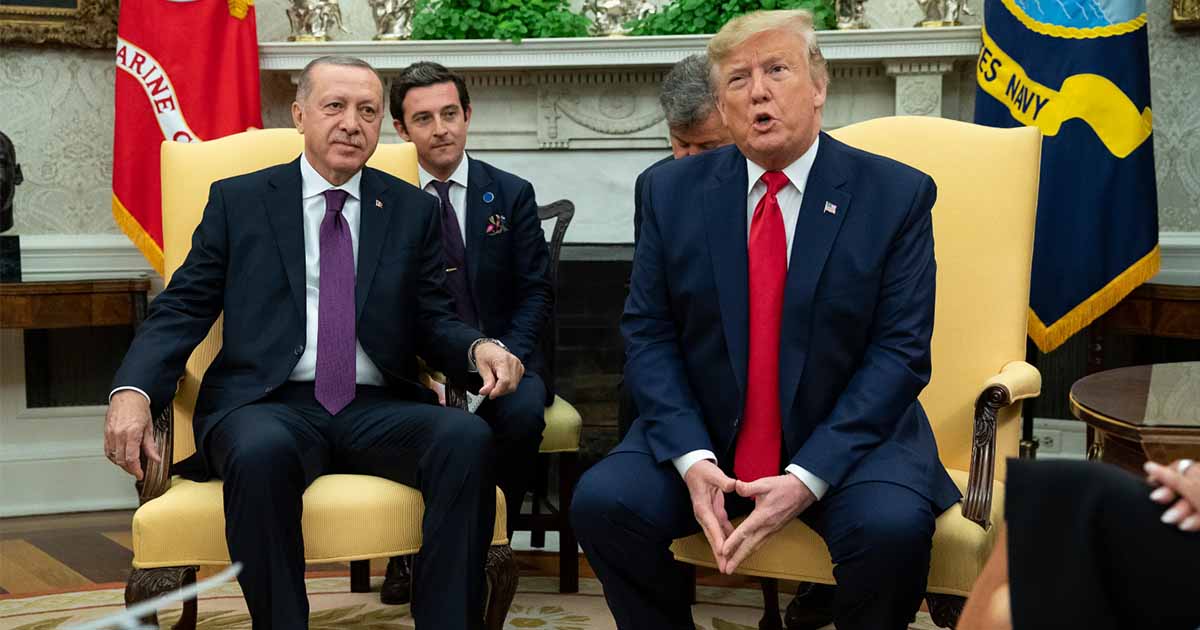 On a day when Congress was holding its first nationally televised hearings in the impeachment probe against Trump, the US president spent several hours meeting at the White House with Erdogan and claimed to be paying no attention to his domestic crisis.

“I would much rather focus on peace in the Middle East,” he told a joint press conference with Erdogan, describing the impeachment as a “hoax” and a “joke.” But Trump steered equally clear of controversy over Turkey, which is rapidly becoming one of Washington’s most problematic partners in a tinderbox region.

Relations have been under severe strain following Erdogan’s ordering of an October offensive against US-allied Kurdish forces in northern Syria.

The House showed its displeasure with Turkey in October by voting to recognize the mass destruction of the Armenian community in the Ottoman Empire as genocide.

Trump ordered US troops stationed in the border area to withdraw ahead of the Turkish invasion while exhorting Erdogan in an extraordinarily undiplomatic letter to avoid too much bloodshed.

“Don’t be a tough guy. Don’t be a fool!” Trump wrote. Despite the letter, Trump’s withdrawal of US soldiers effectively gave Turkey a green light to mount what appears to be an extended occupation of a large swath of Syria where ethnic-Kurds had held sway.

This outraged many in Congress, which saw the move as an abandonment of the Kurds, who died in large numbers while fighting alongside US forces against Islamic State jihadists in the area. The reshuffling of forces in the region was also criticized in Washington as a boon for Russian ambitions.

“Given this situation, we believe that now is a particularly inappropriate time for President Erdogan to visit the United States, and we urge you to rescind this invitation,” a bipartisan group of legislators wrote to Trump last week in a letter made public Monday.

Trump, sitting next to Turkish Pres. Erdogan, gives the game away on Syria: ‘We are keeping the oil. We have the oil. The oil is secure. We left troops behind only for the oil’ pic.twitter.com/gYYDwyAhQS— NowThis (@nowthisnews) November 13, 2019

Initial reports said that Erdogan not only ignored Trump’s letter but threw it in the trash. On Wednesday, he told the press conference that he had used the trip to return the letter to its sender. Trump, however, insisted on his close ties to Erdogan, saying: “We have been friends for a long time.”

Erdogan said Wednesday he returned a letter by his U.S. counterpart that threatened Ankara over its anti-terror operation in northeastern Syria and bemoaned Washington’s treatment of the YPG/PKK terror group’s leader.

“I presented the letter to Mr. President and especially felt sorrow that a U.S. president took a terrorist called Ferhat Abdi Sahin as an addressee,” said Erdogan during a press conference with Donald Trump in Washington.

Sahin, also known as Mazloum Kobani, is the ringleader of the PYD/YPG, the Syrian offshoot of the PKK terror organization. Trump repeatedly praised the terrorist leader and said he looks forward to seeing him.

The Turkish government says terror group YPG leader Ferhat Abdi Sahin aka Mazloum Kobane is on Interpol’s Most Wanted list. Who is he? pic.twitter.com/pQ4Oi9HeTE

Erdogan said Sahin has caused the deaths of hundreds of Turkish people and is the adopted son of Abdullah Ocalan, the jailed leader of the PKK terrorist organization.

“That the U.S., which we call our strategic partner, welcomes such a person actually saddens us. Likewise, this person is welcomed by Russia. It is hard to comprehend this within the scope of the fight against terrorism across the world,” said Erdogan.

There was no indication of major progress on any of the growing disputes between the two countries after the Trump-Erdogan get-together. On top of the Syria mess, Turkey’s role in NATO is in question following Erdogan’s decision to buy the Russian S-400 anti-aircraft missile system.

Washington has excluded Turkey from the F-35 stealth warplane program over the purchase, creating even more tension in the troubled Western alliance. Erdogan has responded by suggesting he could instead buy Russian warplanes as well.

“Hopefully we will be able to resolve that situation,” Trump said at the press conference, without further explanation. The US Congress has proven far less patient with Turkey.

Relations have been under severe strain following Erdogan’s ordering of an October offensive against US-allied Kurdish forces in northern Syria.

Trump — who needs to maintain Republican loyalty to avoid conviction in the Senate if he as, as expected, impeached by the House of Representatives — wants to avoid antagonizing lawmakers further. He invited several Republican senators to the White House to meet with Erdogan.

The House showed its displeasure with Turkey in October by voting to recognize the mass destruction of the Armenian community in the Ottoman Empire as genocide.

On Oct. 29, the anniversary of the Turkish Republic, the House voted 405-11 in favor of the resolution to recognize alleged killings of Armenians under the Ottoman Empire in 1915. The resolution is not legally binding.

Erdogan reiterated his call for historians to investigate the issue, “If the U.S. side really wants to act fairly, it should refrain from taking a political stand on a matter that historians should decide.”

However, Erdogan said Wednesday he believed the U.S. Senate would not pass a resolution to recognize the so-called Armenian genocide.

Modern-day Turkey continues to deny the accusation of genocide, saying Armenians were merely among the many other victims of World War I. The vote infuriated Erdogan who said Wednesday that it cast a “deep shadow.”

There is tension to spare between the two countries even beyond the fate of the Syrian Kurds and the S-400s.

Washington is angry over the long-term detention of Turkish citizens working for US consulates, while Ankara continues to push hard for the extradition of the Islamic cleric Fethullah Gulen, whom Erdogan claims engineered a failed 2016 coup.

While President Trump storms out of White House meetings with Democrats, he rolls out the red carpet for autocrats.

President Trump continues to demonstrate an uncanny ability to get rolled by autocrats like Erdogan and Putin without getting a thing in return. pic.twitter.com/pnv1pnatdQ— Chuck Schumer (@SenSchumer) November 13, 2019

Another point of contention was the ugly scenes during Erdogan’s last Washington visit, in 2017, when his bodyguards beat up protesters outside the Turkish ambassador’s residence.

Pakistani porters: the unsung masters of the mountains