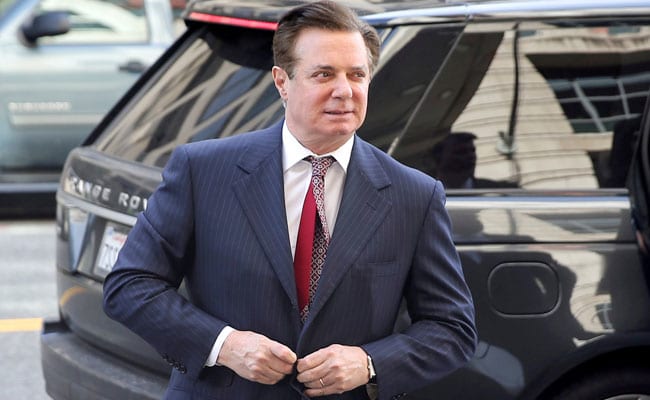 US President Donald Trump’s former campaign chief Paul Manafort was sentenced to 47 months in prison on Thursday for tax crimes and bank fraud in the highest profile case yet stemming from Special Counsel Robert Mueller’s Russia investigation. It was the stiffest prison sentence given so far to an associate of the president in Mueller’s probe into alleged Russian interference in the 2016 election but was significantly lighter than many expected.

Judge T.S. Ellis said the 69-year-old Manafort had committed “very serious crimes” but he rebuffed arguments by prosecutors from the Special Counsel’s office for a longer sentence. Advisory sentencing guidelines called for a prison term of between 19 and 24 years but Ellis dismissed that as “excessive” and disproportionate to what other defendants have received for similar crimes.

Manafort still faces sentencing in a second case in Washington next week, where the maximum penalty is 10 years and the judge has appeared more sympathetic to prosecutors.

“The government cannot sweep away the history of all these previous sentences,” the judge said. Manafort was convicted in August of five counts of filing false income tax returns, two counts of bank fraud and one count of failing to report a foreign bank account.

Prosecutors alleged that Manafort used offshore bank accounts in Cyprus and other countries to hide more than $55 million he earned from political consulting services he provided to Ukrainian politicians.

The money was used to support a lavish lifestyle which included purchases of luxury homes and cars, antique rugs, and expensive clothes, including an $18,500 python jacket. His conviction was the culmination of a stunning downfall for a man who, in addition to Trump’s campaign, worked on the White House bids of Gerald Ford, Ronald Reagan, George H.W. Bush, and Bob Dole.

Speaking from a wheelchair and wearing a green prison jumpsuit with the words “Alexandria Inmate,” Manafort told the court before sentencing that his “life, professionally and personally, is in a shambles.”

“I feel the pain and shame,” said Manafort, who the defense says suffers from high blood pressure and gout. “To say that I feel humiliated and ashamed would be a gross understatement,” he said. Imposing his sentence, Judge Ellis said he did not hear Manafort express regret or remorse but he said the sentencing guidelines were “way out of whack.” “I think what I’ve done is punitive,” Ellis said.

He sentenced Manafort to a total of 47 months in prison for the eight counts and credited him with nine months of time served for the period he has already spent in prison. He ordered him to pay millions of dollars in restitution the exact amount remains to be determined and a $50,000 fine.

Manafort still faces sentencing in a second case in Washington next week, where the maximum penalty is 10 years and the judge has appeared more sympathetic to prosecutors. The charges against Manafort involved work he did for 10 years on behalf of Moscow-allied politicians in Ukraine, and nothing related to the 2016 election an issue he argued in asking the court for leniency.

Defense attorney Kevin Downing, speaking after the sentencing said Manafort had “made clear he accepts responsibility for his conduct. “And I think most importantly, what you saw today is the same thing that we had said from day one there is absolutely no evidence that Paul Manafort was involved with any collusion with any government official from Russia,” Downing said.

Manafort is one of six top advisors and associates of Trump’s 2016 presidential election campaign to be charged in the Mueller investigation. During Manafort’s trial, much of the damaging testimony against him was provided by his former deputy Rick Gates, who is awaiting sentencing after reaching a plea agreement with the Special Counsel’s office.

Besides Manafort and Gates, four other former Trump associates face charges or have pleaded guilty to charges stemming from the Mueller investigation. Former National Security Advisor Michael Flynn pleaded guilty to lying to the FBI about his contacts with Russian officials and is awaiting sentencing.

Trump’s former personal attorney Michael Cohen is to begin serving a three-year prison sentence on May 6 for fraud, tax evasion, illegal campaign contributions and lying to Congress. George Papadopoulos, a foreign policy advisor to the Trump campaign, pleaded guilty to lying to the FBI and was sentenced to two weeks in prison. Another Trump advisor, Roger Stone, awaits trial.

Trump has repeatedly denied any election collusion with Moscow and denounced the probe by Mueller, a former FBI director, as a “political witch hunt.” Trump has also dangled the possibility of pardons for some of those indicted including Manafort, whom he has praised as a “good man” who has been treated unfairly.

Manafort has been charged in Washington with money laundering, witness tampering, and other offenses and faces separate sentencing in that case on March 13.

Kerala: Which Of The Rapists Gave You Most Pleasure, Cops Asked Woman In Horrific Case