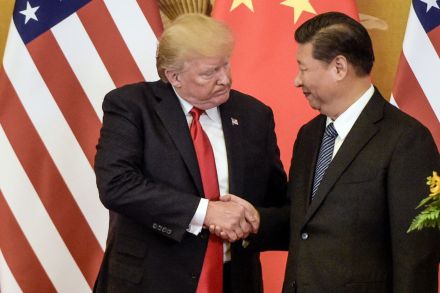 President Donald Trump will hold a make-or-break trade meeting with his Chinese counterpart at the G20 summit this week and also navigate a diplomatic minefield with Russia’s president after unrest in Ukraine, the White House said Tuesday.

Trump is due to meet Chinese leader Xi Jinping in Buenos Aires for a working dinner at the Group of 20 summit that runs Friday and Saturday. Economic advisor Larry Kudlow told a White House press conference that “the president said there is a good possibility that we can make a deal and he is open to it.”

US-Russia relations are under huge strain, while Trump is under investigation at home for alleged collusion with Moscow during his 2016 presidential election win.

But Kudlow warned that if China holds out against US demands, Washington could ramp up the trade war. “If need be, if things don’t work out in this US-China summit meeting, he will invoke another $267 some odd billion dollars in tariffs.”

The issue is the biggest looming over Trump’s visit to Argentina, with the two economic giants locked in exchanges of punitive tariffs and Washington effectively threatening to target all remaining Chinese imports, including Apple products made in China.

Despite Kudlow’s repeated insistence that Trump sees cause for optimism, he also underlined the tough conditions that the administration wants to impose on Beijing.

“China should change its practices and come into the community of responsible trading nations,” Kudlow said, stressing that he considers the US economy in far better shape than China’s to weather a prolonged trade war. “We are in a position to deal with it and handle it very well,” he said.

China will have to give way on “fairness and reciprocity,” he said, warning that US concerns over intellectual property theft and China’s forced technology transfers “must be solved.”

Trump is also to meet separately with Russia’s Vladimir Putin and the leaders of Argentina, Germany, India, Japan, South Korea, and Turkey, White House officials said. His talks with Putin present an especially tricky task and may be cancelled at the last minute over Russia’s seizure of Ukrainian vessels in the latest episode of a long-simmering military confrontation.

The CIA reportedly has told Trump that Prince Mohammed, who has close ties to the administration, was behind the brutal murder of dissident journalist and US resident Jamal Khashoggi.

US-Russia relations are under huge strain, while Trump is under investigation at home for alleged collusion with Moscow during his 2016 presidential election win. Complicating the already complex diplomatic landscape, Russia shot at Ukrainian ships and captured three vessels on Sunday, prompting the government in Ukraine to accuse Moscow of preparing for “full-scale war.”

Trump told The Washington Post on Tuesday that “maybe I won’t have the meeting.” He said he would wait for the results of a report from his national security team before deciding.

Trump’s last summit with Putin, in Helsinki in July 2018, prompted an outpouring of criticism that the US president had failed to hold his Russian counterpart to account over what US intelligence services have concluded was deliberate Kremlin meddling in the 2016 elections.

Read more: Russia beats US at its own game: France, Japan, and IMF…

There are no plans, the White House says, for Trump to meet with Saudi Crown Prince Mohammed bin Salman, the de facto leader of the oil-rich Gulf kingdom.

The CIA reportedly has told Trump that Prince Mohammed, who has close ties to the administration, was behind the brutal murder of dissident journalist and US resident Jamal Khashoggi.

But Trump has dismissed this, prompting an outcry from opponents and even some allies in Congress. Trump spokeswoman Sarah Sanders indicated that an informal meeting may yet happen.

“I wouldn’t say we’ve ruled out any interaction,” she said, although she stressed that “the president’s schedule is pretty packed.”

Previous articleArbitration clause on Kashmir: A plausible solution
Next articleWar no option for India and Pakistan, says Imran Khan

24 September 2021
Previous articleArbitration clause on Kashmir: A plausible solution
Next articleWar no option for India and Pakistan, says Imran Khan

Iran defiant as it holds day of anti-Israel protests

US suspends F-35 program deliveries to Turkey over Russian arms