Today will be remembered as 11/9: Donald J. Trump stands victorious as the United States forty-fifth President and is all set to move into the White house, after one of the most repulsive presidential campaigns in history. Was it really Donald Trump that won today? Or was it hate that won, fear, racism, sexism, homophobia, or prejudice and self-interest that really won in the end. The New York businessmen and a real estate tycoon – who has degraded women, incited racial and religious hatred, promised to build a wall with Mexico and to ban Muslim immigrants- is unsurprisingly, not universally popular.

In the last few days of campaigning, it was reported that Trump’s staff confiscated his Twitter, given his laissez-faire attitude towards logic and tact. President Obama warned voters in Michigan on the wave of election, “In the last two days, they had so little confidence in his self-control they said we are just going to take away your Twitter. Now, if somebody can’t handle a Twitter account, they can’t handle the nuclear codes. If somebody starts tweeting at three in the morning because SNL made fun of you, then you can’t handle the nuclear codes.” Yet this is the man who will in January be sitting in the White house. 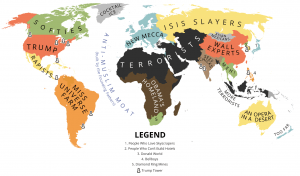 Now just imagine President Trump dealing with political tensions in the Middle East. Yes. Brace yourself! The comparison being given is with Brexit but the analogy is not apt. It is the difference between the effects of a blowout tire versus an exploding car. As results trickled in over the course of Tuesday night, Google searches for ‘Move to Canada’ went through the roof, crashing Canada’s website for immigration earlier this morning. So why are we in state shock? America has decided. Majority America has elected a ‘sociopath’ who suggests men will inevitably commit sexual assault if left alone with women. In a digitally connected world with access to technology and information transfer on everyone’s fingertips – has not given us any better decision making as we elect the Modi’s, Sharif’s and Trump’s as our leaders.

Trump in his earlier speeches declared that 1.6 billion Muslims are a security threat to the USA and suggested a ban on their entry. Each and every one of them! Was he aware of those numbers? Perhaps the pampered mentality of the American businessman made him forget that sometimes irresponsible domestic rhetoric can reverberate across the globe? So the takeaway from election 2016 seems to be that being racist, bigoted, prejudice, violent, lying, sexual predator is more acceptable than being a woman. When people ask why women don’t report sexual assault. You got your answer today: a man can have double digit accusers and still be elected President of United States of America.

As millions of Americans cast their votes, the most significant poll of all was conducted by Morning Consult regarding the U.S Presidential elections, according to these polls 85% of Americans ‘just want it to be over’. Yes. Its over for today but they may come to regret it in the next four years.

[The writer is Researcher and Program Coordinator at Governance and Policy Advisers, Islamabad. Can be reached at imran31255@hotmail.com and tweets @imrankhanniazai]

Previous articleInside Syria Part 1: In The City Of Allepo You Have A Million Ways To Die And No Chance To Escape
Next articleFear of a Female President

23 June 2022
Load more
Previous articleInside Syria Part 1: In The City Of Allepo You Have A Million Ways To Die And No Chance To Escape
Next articleFear of a Female President