After unrest throughout the United States over the murder of George Floyd by a police officer, angry protestors have now gathered outside the White House. Trump, who had previously tweeted about how these protests were causing havoc, has now been reported to have hid inside an underground bunker. 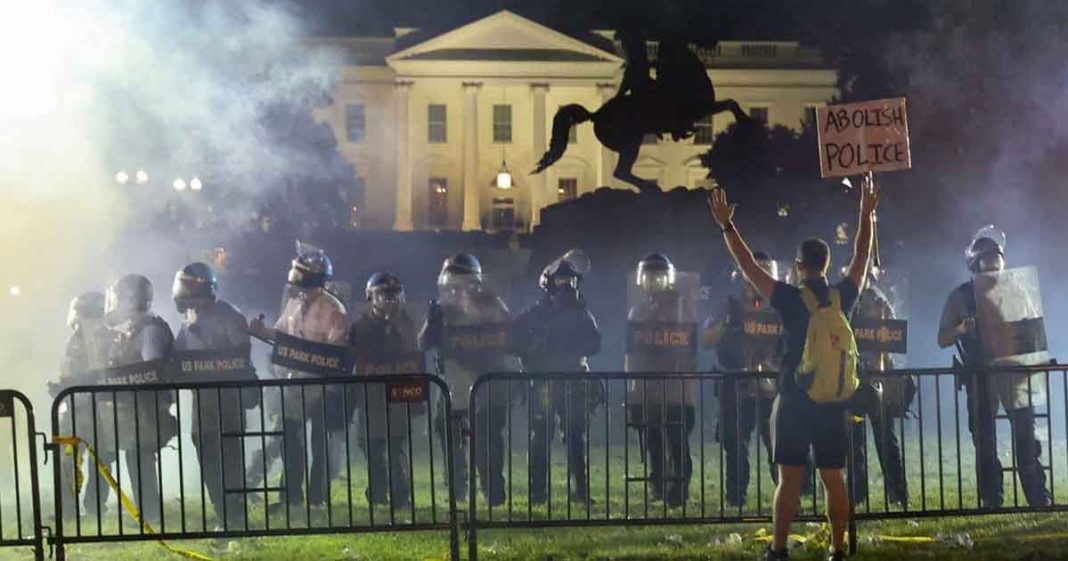 Haters of US President Donald Trump had a field day after media allegations that he was whisked away to an underground bunker as hundreds of protesters gathered on Friday in front of the White House.

These protests outside the White House came after Trump’s response the murder of George Floyd by the police. He took to social media to express his disapproval of protests and suggested bringing in the military.

Trump was moved to the secure location by the Secret Service, according to reports by the New York Times and Associated Press. According to AP, the president spent about an hour in the facility, which is designed to be used in case of a physical threat to senior executive officials.

Both reports make it clear that the decision to move Trump into the bunker was taken by the Secret Service. The image of the man hiding from the people’s wrath like some despot on the verge of being toppled was too appealing for his many detractors to miss.

The #Resistance side of Twitter had a field day snickering about how the president was hiding underground from a bunch of 20-year-olds.

Tweeting hate from a secure underground bunker beneath The White House and surrounded by the Secret Service.

Trump wants to portray himself as a strongman, authoritarian…did he really go hide in a bunker from some 20 year old kids? 😂😂😂 real tough guy

And as certain as death and taxes, he was unfavorably compared to his presumed Democratic challenger, Joe Biden.

Trump over the past few days has taken to Twitter to denounce a law enforcement response he felt hasn’t been strong enough, especially criticizing local Democratic leadership across the country and suggesting the military may need to be called in to deal with rioting.

Crossing State lines to incite violence is a FEDERAL CRIME! Liberal Governors and Mayors must get MUCH tougher or the Federal Government will step in and do what has to be done, and that includes using the unlimited power of our Military and many arrests. Thank you!— Donald J. Trump (@realDonaldTrump) May 30, 2020

Unlike Trump, former Vice President and presumptive Democratic presidential nominee Joe Biden ventured out Sunday—a rarity for him during the coronavirus pandemic—visiting what was the site of protests and rioting Saturday night in his hometown of Wilmington, Delaware.
“Biden was in his basement to protect against a pandemic. Trump went into the bunker because he’s afraid of Americans,” one person wrote on Twitter.

Biden was in his basement to protect against a pandemic. Trump went into the bunker because he's afraid of Americans.— Oliver Willis (@owillis) June 1, 2020

Following the allegations in the media, the hashtag #BunkerBoy started trending on Twitter, adding more fuel to the fire in relations between the sitting US president and the public.

Trump turned off the White House lights & hid in a bunker. I like presidents who don't hide in bunkers.#BunkerBoy pic.twitter.com/6Ly8TFvAyd— Jake Morphonios (@morphonios) June 1, 2020

Unrest in the US over George Floyd murder

The United States has been forced to send in the National Guard into cities all across the country because of prolonged riots over the murder of George Floyd. Thousands of National Guard troops patrolled major US cities Sunday after five consecutive nights of unrest over the George Floyd murder and associated police brutality boiled over into arson and looting, sending shock waves through the country.

President Donald Trump blamed anarchists and far-left activists for the violence, threatening to officially designate the ANTIFA movement as terrorists, while local leaders appealed to citizens to give constructive outlet to their rage without destroying their communities.

Angry protestors gathered outside the White House to oppose his handling of the situation. Due to this, reports say that Trump hid in an underground bunker with the help of the Secret Service.