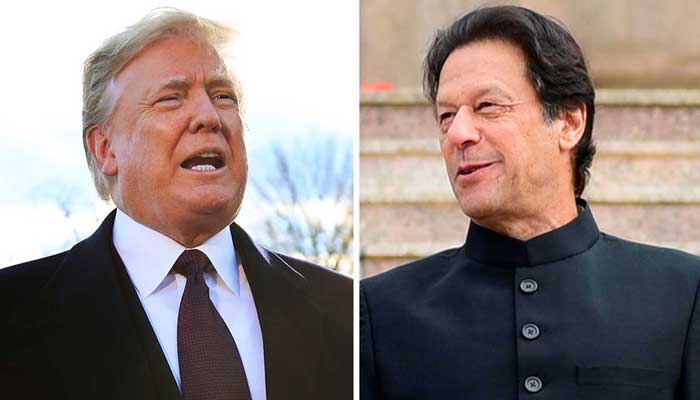 Information Minister Fawad Chaudhry has said that Pakistan’s role in bringing the Taliban to the negotiation table has been appreciated by US President Donald Trump. During an interview with Gulf News on Sunday, Chaudhry said that Trump appreciated Islamabad’s role in the Afghan peace talks so much that he has reviewed and changed his policies against Pakistan.

The information minister stated that a meeting between Prime Minister Imran Khan and Trump is on the cards but it will be possible only after the Afghan peace talks. “We are waiting to see this happen,” he added. Chaudhry said Pakistan is playing its role at a fairly advanced level for the Afghan peace dialogue. “Frankly, we expect a positive outcome from the negotiations between the US and Afghan Taliban,” he said.

Chaudhry said Pakistan has special strategic relations with Saudi Arabia and the UAE.

Regarding reports that the US may offer Pakistan a free trade agreement (FTA) in return for its assistance in ending the Afghan war and that US Senator Lindsey Graham discussed the idea with Pakistani officials during a recent visit to the country, Chaudhry said, “I know about the FTA offer but cannot comment on this at this stage.”

The information minister further said stability and peace in Afghanistan is not just in the US’ interests but Pakistan will also greatly benefit from this. Stating that it is not the right time to hold dialogue as Indian politics is currently in turmoil because of the upcoming elections, the information minister said, “We have delayed our efforts to hold talks with India because we do not expect any big decision from the present Indian leadership,” Chaudhry said.

“It is useless to talk to them [India] now unless there is some stability. We will move forward once the new government is formed after the elections,” he added. Chaudhry said the opening of the Kartarpur Corridor between India and Pakistan in November last year is a remarkable development between the two countries because it will not only help the Sikh community but also benefit Indo-Pak relations.

Chaudhry said Pakistan is playing its role at a fairly advanced level for the Afghan peace dialogue.

When asked which Indian leader will suit Pakistan more when it comes to peace talks — Narendra Modi or Rahul Gandhi, the information minister said it does not matter for Pakistan. “We will respect any Indian leader and the party elected by the Indian people. And, we would like to move forward to hold dialogue with whosoever comes into power in India,” he upheld.

On being asked who calls the shots in Pakistan when it comes to foreign policy, Chaudhry said: “Of course Prime Minister Imran Khan.” “During the earlier regimes, there had been conflicts between the civilian government and the army on various issues as they were not capable of talking to each other frankly. But this is the not the case anymore since Imran Khan has come into power,” he said.

Read more: Will Trump and Imran Khan be meeting in 2019?

“Our government has an advantage that we can talk freely with each other. Currently, each and every major policy in Pakistan is actually a consensus policy – with the civilian government and the army on the same page,” he explained. Chaudhry noted that Pakistan had become irrelevant to the Middle East during the last decade or so as earlier governments isolated the country.

“Soon after coming into power, PM Imran has reviewed the policies and we have worked on improving relations with Saudi Arabia and the UAE. Imran visited both the countries on his first official visit and talked to the leadership at length,” he said. Chaudhry said Pakistan has special strategic relations with Saudi Arabia and the UAE. “Our relations become even more important as the largest number of Pakistani expatriates is working in these two countries.”

What can Pakistan learn from Malaysia: PM Khan tells