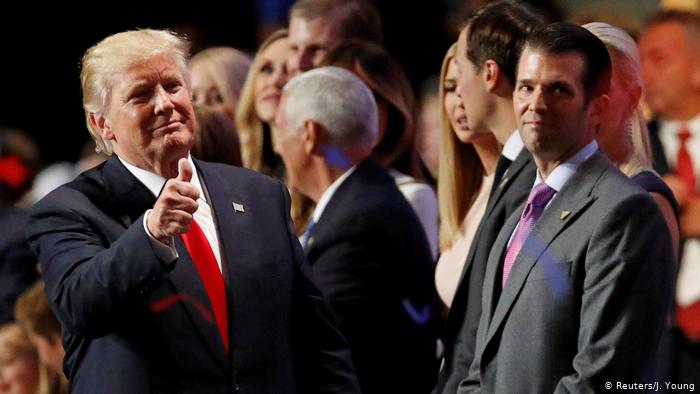 Donald Trump Junior, son of the U.S president, has come under fire because of a new scandal involving his family and their campaign. New information has brought to light that the Russian government and its connected individuals may have attended a meeting with Trump, Jr. in the June of 2016 in an effort to downplay the Hillary Clinton campaign.

It appears that Mr. Rinat Akhmetshin, a Russian born American citizen, and lobbyist along with Russian lawyer Natalia Veselnitskaya had been present in Trump tower at the aforementioned meeting. Whether this was a breach of U.S law is still under debate, but with the surfacing of new information, it seems like it will be heavily contested. Other attendees of the meeting included senior campaign managers for Trump including Senior Advisor Jared Kushner and consultant Paul Manafort.

“The Crown prosecutor of Russia met with his father Aras [a Moscow-based developer who tried to partner with Trump in a hotel project] this morning and in their meeting offered to provide the Trump campaign with some official documents and information that would incriminate Hillary [Clinton] and her dealings with Russia and would be very useful to your father.” –Email to Don J from Rob Goldstone

The meeting was initiated by a series of emails between Trump, Jr. and Rob Goldstone, a British publicist writing on behalf of the Agalarov business family in Russia. Donald Trump himself is known to have personal ties with Mr. Aras Agalarov and his son Emin Agalarov. Emin is a well known Russian pop-star and even featured Trump in one of his music videos. The email sent by Mr. Goldstone informs Trump, Jr. that he has sensitive information from Russia which may incriminate Hillary Clinton.

In response to the email, Trump Jr., instead of forwarding the email to security agencies, wholeheartedly accepted the offer of information from a foreign government. It is indicated that Russia had an active involvement and interest in supporting the Trump campaign over its opponents’.

“Seems we have some time and if it’s what you say I love it especially later in the summer. Could we do a call first thing next week when I am back?
Best, Don.” – Reply to Mr. Goldstone from Trump Jr.

Supporters of the Trump campaign have stated that the help offered to Trump, Jr. was by Russian individuals, and not by the Russian government. However, Mr. Akhmetshin and Ms. Veselnitskaya are said to be too close to the Russian administration and have been disseminating information about Hillary Clinton as a private effort.

Read more: Trump to give Iran a thumbs up once again

Trump, Jr. has defended himself by stating that the meeting was unable to produce information of value for his campaign and so no treason has been committed. He has also stated that his father, Donald Trump, was completely unaware of the meeting which took place in the same building he was present in at the time.

This entire scenario comes at a time when the U.S president is already under fire for allegedly colluding with the Russian governments in an attempt to sway the results of the previous election. Trump Jr.’s scandal has increased the pressure on the family and it makes the current impeachment efforts against the president stronger.

Previous articleOur legacy,our democratic credentials and the storming of the Bastilles
Next articleIndia’s clandestine war inside Pakistan

18 June 2021
Previous articleOur legacy,our democratic credentials and the storming of the Bastilles
Next articleIndia’s clandestine war inside Pakistan

Afghanistan is ripe for proxy war