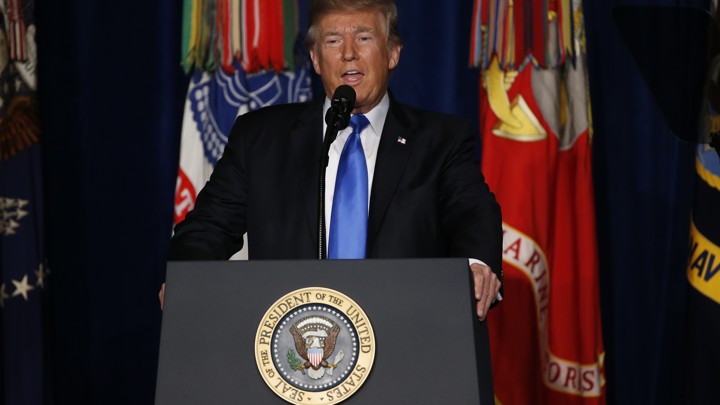 It is a common feature of democratic politics that more a leader promises change, the more things will stay the same. Professions of novelty are but a smokescreen for the maintenance of dubious and controversial policies. So it was with Barack Obama, who as a candidate trilled about “change we can believe in”, proceeded to preserve and institutionalize almost every aspect of President Bush’s war on terror after becoming President. And so it is with President Trump, who boldly opposed foreign interventionism in the 2016 election but has since intensified his predecessor’s military campaigns, deploying more troops to Syria and escalating airstrikes in Yemen, for example.

In all fairness to Trump, he is not responsible for the chaos in Afghanistan. Bush and Obama both failed, in their separate ways, to handle the conflict. Indeed, Trump deserves credit for initially refusing to commit to the war and for demanding a rigorous review of US strategy

But, while Trump was quick to double down in those countries, he seemed skeptical about the US’ 16-year war in Afghanistan. A policy review that commenced soon after he took office dragged on for months and involved acrimonious arguments. Trump repeatedly rebuffed efforts by his National Security Adviser, H R McMaster, and other military men inside the administration to escalate America’s troop presence. At one point it seemed he was seriously considering withdrawing from the conflict; at another, that he would use private contractors instead of conventional forces to fight the war. But, after seven months of deliberation, Trump has finally decided to side with the generals.

He laid out his plans for Afghanistan this week in a speech at Fort Myer in Arlington, Virginia. Trump labored the point that this was a “new strategy” (the phrase was repeated five times). But as far as one can tell, he is largely continuing the Obama administration’s approach. America’s goal in the war, Trump said, is to “win” by destroying IS and al-Qaeda, stopping terror attacks against the US, and “preventing the Taliban from taking over Afghanistan”. This is not victory, however, but a continuation of the existing stalemate. Far from providing a novel strategy that aims to end hostilities, Trump has offered a recipe for perpetual war. Talk of “victory” is just rhetorical window-dressing.

Torture is also widespread in Afghanistan and could also play into the enemy’s hands. After all, many Afghans reluctantly accepted Taliban rule in the mid-1990s because they were sick of the civil war’s brutality

The first prong of Trump’s “new strategy” is a renewed military commitment. He did not specify additional troop numbers, but news reports point to about 4000. These forces, like the 8,400 or so currently deployed, will mostly be involved in training and advising the Afghan military. Others – again, it is unclear how many – will presumably be special operations forces assigned to kill or capture Islamic State and other militants. Then there is the murky question of CIA involvement. In the past, the agency has fielded paramilitary teams that fund and work with local Afghan militias, such as the Khost Protection Force. Such activities may increase, as might the number of private contractors in Afghanistan.

Trump insisted that there would be no deadlines for troop withdrawal of the sort imposed by President Obama, who surged tens of thousands of soldiers into Afghanistan while simultaneously laying down a chronology for their departure. Trump’s strategy eschews such arbitrary deadlines in favor of an approach based on “conditions on the ground”. This is actually more similar to Obama’s policy than many pundits seem to realize: officials stated in 2009 that troop deadlines were flexible and “conditions-based”. And, indeed, Obama backtracked on his plans to pull out by 2014, maintaining several thousand troops in the country.

It has become a cliché to blame the failure of Obama’s troop surge on these deadlines. While setting a timetable might have been unwise, Obama’s policy suffered from deeper flaws that would have hampered progress regardless. For instance, the US and its allies never had enough troops – even at the height of the surge – to pacify the whole country. Trump has far fewer troops, and his strategy suffers from the same basic weaknesses (having to work with an inefficient and kleptocratic Afghan government, for example). As Michael Kugelman of the Wilson Center wrote, Trump’s “open-ended commitment to Afghanistan effectively buys America more time to keep making the same mistakes.”

Beijing has already urged Pakistan to reduce militancy and thus protect the security of its infrastructure projects in Balochistan and elsewhere, while also trying to improve Afghan-Pakistan relations and broker talks with the Taliban

Another pillar of Trump’s strategy is “the integration of all instruments of American power — diplomatic, economic, and military”. Again, he did not provide any detail, so one can only guess what is involved. According to a report in Bloomberg, the US’ financial assistance to the Afghan government will continue, as will its anti-corruption efforts. Trump rejected “nation-building” in his speech, but this was likely to placate his anti-interventionist supporters. In reality, the Afghan government and military are overwhelmingly dependent on American assistance, and the state would quickly collapse without it. As Eli Lake quipped, Trump has replaced “nation-building” with “nation-preservation”.

The State Department will presumably have some role in Trump’s plans, too. Most analysts believe the war in Afghanistan cannot be won on the battlefield and that a negotiated outcome is the only viable way of ending the conflict. In his speech, Trump mentioned the possibility of peace talks with the Taliban, but said that “nobody knows if or when that will ever happen.” Rex Tillerson, the Secretary of State, offered firmer backing for negotiation in a statement issued after Trump’s address, saying “We are there to facilitate and ensure that there is a pathway for reconciliation and peace talks”. And yesterday Gen John Nicholson, the commander in Afghanistan, echoed Tillerson’s assurances.

Indeed, soon after Trump’s speech, the Chinese foreign ministry issued a strong statement defending its old ally. Pakistan can also put the squeeze on Trump by closing off NATO supply routes into Afghanistan, which transit through the country

Progress in this area may be slow. The Taliban do not seem eager to join peace talks at the present time, partly because of their strength on the battlefield (the Afghan government only controls about 60% of the country, according to recent estimates). Trump’s State Department is understaffed and downsizing, and his administration does not yet have an ambassador in Afghanistan, while the post of special envoy for Afghanistan and Pakistan has been eliminated. Furthermore, a successful diplomatic resolution to the conflict would surely involve other key regional players like Iran, China, and Russia. But America’s relations with these countries are troubled, and they were not even mentioned in Monday’s speech.

The most controversial aspect of Trump’s strategy concerns Pakistan, which allegedly harbors Taliban militants on its western border. Politicians and pundits have been urging Trump to crack down on Afghanistan’s neighbor, and he did not disappoint. Pakistan had “much to lose”, he said, if it continued to shelter terrorists on its territory. Trump gave no detail as to the sorts of punishment he would inflict on the South Asian nation if it did not comply. But news reports have suggested aid cuts and drone strikes may be on the cards, and a senior administration official said after the speech that sanctions are being considered against individual Pakistanis, too.

This approach is not entirely new: Bush and Obama had both tried to stop Pakistan from backing the Afghan Taliban. US aid had been declining before Trump took office, and last year the Obama administration withheld funds because of Pakistan’s alleged support for the Haqqani Network. Dwindling aid lessens the leverage America has over the country, and it is unlikely that threats of further cuts will work. Trump also called on India – Pakistan’s arch-rival – to do more in Afghanistan, which will surely harm US-Pakistani relations and jeopardize cooperation. Indeed, the Pakistani National Security Council yesterday issued a strong statement criticizing Trump’s speech.

In reality, the Afghan government and military are overwhelmingly dependent on American assistance, and the state would quickly collapse without it

Pakistan, convinced America is working with India against its interests, may gravitate further towards China. Beijing is investing huge amounts of money in the country as part of the China Pakistan Economic Corridor, and will surely step into the void left by any withdrawal of American support. Indeed, soon after Trump’s speech, the Chinese foreign ministry issued a strong statement defending its old ally. Pakistan can also put the squeeze on Trump by closing off NATO supply routes into Afghanistan, which transit through the country. The only alternative route is the Lapis Lazuli Corridor, which runs through the Caucasus and Turkey. It not only has limited capacity but is also vulnerable to Russian and Turkish interference.

At best, bullying Pakistan will achieve nothing; at worst, it could be counter-productive. A more constructive approach would see the US working with China as an intermediary. Beijing has already urged Pakistan to reduce militancy and thus protect the security of its infrastructure projects in Balochistan and elsewhere, while also trying to improve Afghan-Pakistan relations and broker talks with the Taliban. In any case, the Taliban enjoys support from other countries, including Iran and maybe Russia, while it has also received funding from Saudi Arabia. To effectively choke off the group’s foreign backing, Trump would need a much broader approach. But there was no indication of that in his speech.

The first prong of Trump’s “new strategy” is a renewed military commitment. He did not specify additional troop numbers, but news reports point to about 4000

Trump also promised to give his field commanders more latitude, continuing a trend started by President Obama who relaxed targeting restrictions last year. Even if these changes yield tactical advantages on the battlefield, civilian casualties will rise, having already increased by 70% so far this year, according to the UN. Trump had nothing to say about human rights in his speech and generally seems quite indifferent to such matters. But civilian fatalities sow anger and facilitate Taliban recruitment. Torture is also widespread in Afghanistan and could also play into the enemy’s hands. After all, many Afghans reluctantly accepted Taliban rule in the mid-1990s because they were sick of the civil war’s brutality.

In all fairness to Trump, he is not responsible for the chaos in Afghanistan. Bush and Obama both failed, in their separate ways, to handle the conflict. Indeed, Trump deserves credit for initially refusing to commit to the war and for demanding a rigorous review of US strategy. As he said at the beginning of his speech, his instinct at first was to “pull out”. However, he has now embarked on a path that will likely prolong the Afghan quagmire for many years to come, while dividing the region still further between the US and India, on the one hand, and China and Pakistan, on the other. Given the numbers of nuclear weapons involved on either side, this should make us worried.

Rupert Stone is an independent journalist working on national security, with a focus on the US, UK, and South and Central Asia. He has written for a variety of publications including Newsweek.

Afghanistan: 30 dead in an ISIS attack on hospital