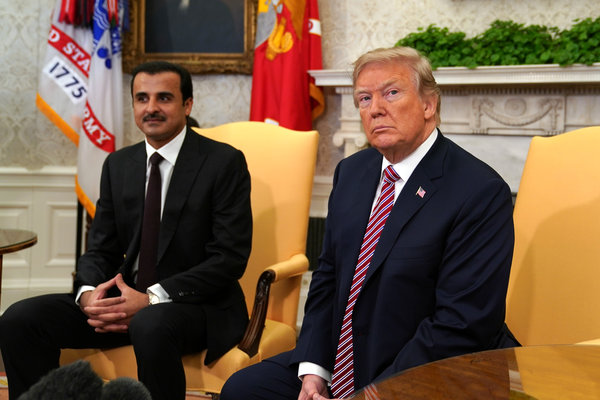 Following the rift between Qatar and other Gulf Cooperation Council (GCC) countries in 2017, President of the United States of America Donald Trump backed Saudi Arabia and UAE, declaring Qatar as a “funder of terrorism”. However, today during a press conference with the Emir of Qatar Tamim bin Hamad Al-Thani, who is on a friendly visit to States, Trump lauded the efforts of Qatar through which it is attempting to counter terror financing. He went on to call Qatar as an “Ally in the war against terrorism”.

Where it is just considered an addition to the President Trump’s list of U-turns, it also marks a remarkable success for Qatari diplomatic and lobbying efforts in Washington D.C. Emir Tamim bin Hamad Al-Thani had categorically denied the allegations which his country has been subjected to since May 2017. Though the relations between Qatar and other Gulf states still remain strained, the move to pull the USA towards its side will certainly help Qatar in normalizing the relations with neighboring Arab states sooner rather later.

Read more: Of weapons and deals: Trump’s shenanigans with Qatar

How did it Start?

Just two days after President Donald Trump’s Gulf tour, on May 23, 2017, fake news surfaced regarding a controversial statement of Emir of Qatar. The news was result of a successful hacking into the website of the Qatari state news agency. The published fake news quoted the Emir criticizing President Trump and praising Iran, the arch-rival of the Gulf. The news sparked outrage in Saudi Arabia, UAE, Jordan, Bahrain and other countries.

The plot which followed the fake news indicated that it was meticulously orchestrated to achieve certain objectives, which have now been successfully attained. This might be precisely the reason why a 180-degree shift in the American stance was seen just in a span of 11 months.

These countries cut off diplomatic ties with Qatar and sealed the border as well as the airspace for Qatari planes. The move was crunching for the tiny, energy-rich Qatar as it relied completely on its neighbors for the food supplies due to its ineptness to grow anything being surrounded by desert. Qatar Airlines, one of the largest in the world in terms of revenue and fleet size, also suffered huge financial losses due to the detours its planes had to take after they were barred from entering the airspace of neighboring UAE, Egypt and Saudi Arabia.

The feud between Saudi Arabia and Qatar was not something new. Egypt and Saudi Arabia have been accusing Qatar for supporting groups like Hamas and the Muslim Brotherhood in the past. Also, the diplomatic propinquity of Iran and Qatar was another differing ground between these rich, influential Arab countries. During Arab spring in 2014, Saudi Arabia and Qatar found themselves supporting opposite sides. But still, the relations had never been on a verge of such unprecedented diplomatic crisis between the GCC countries.

As far the terror financing is concerned, Saudia has been repeatedly accused of doing so. There have been similar reports in the media that ISIS is receiving funds by Saudi influential figures. In Afghanistan, where the United States has been fighting against the menace of Afghan Taliban for 16 years now, Saudis continue to be one of the key financiers of the Taliban insurgency. But since the American Weapons market, the backbone of the American economy, thrives on the Gulf buyers, the stance has not been as resolute in case of Saudi Arabia as it should have been.

The published fake news quoted the Emir criticizing President Trump and praising Iran, the arch-rival of the Gulf. The news sparked outrage in Saudi Arabia, UAE, Jordan, Bahrain and other countries.

In the case of Qatar as well, it is safe to say that the move of the rest of the Gulf countries going hand in hand with American approval was just to push Qatar away from the Iranian camp. Apart from the economic interest in the form of weapon sale/purchase, Iran is a uniting factor between the Arab countries and the United States of America.

Russia was attributed to the hacking and fake news incident which triggered the whole Gulf crisis; the country’s role became evident due to the Russian IP address of hacker. However, it is nothing close to conclusive evidence as altering the IP address these days is a matter of few clicks, even for the common internet users. The plot which followed the fake news indicated that it was meticulously orchestrated to achieve certain objectives, which have now been successfully attained. This might be precisely the reason why a 180-degree shift in the American stance was seen just in a span of 11 months.

Dubai’s economy is in turmoil, and it wont’t be getting better any time soon

What kind of military power is India?