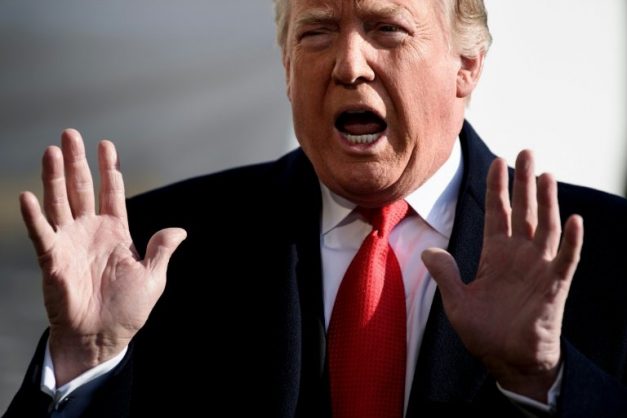 President Donald Trump threatened Friday to seal the US-Mexico border “entirely” if Congress does not approve billions of dollars in funding for a wall. In a burst of early morning tweets, the president said the alternative to funding his controversial wall project would be total separation from Mexico — including making US car companies pull out their factories based on the other side of the frontier.

The threat yet again upped the ante in a political row that has led to a partial shutdown of the US government and seems set to dominate the start to the third year of Trump’s presidency. “We will be forced to close the Southern Border entirely if the Obstructionist Democrats do not give us the money to finish the Wall,” Trump tweeted.

Trump said he would then take US-Mexican relations back to the days before the NAFTA agreement opened free trade across Canada, Mexico and the United States. That would “bring our car industry back into the United States where it belongs,” he said.

It was not clear how separating the two huge neighbors would work. Bilateral trade totaled an estimated $615.9 billion in 2017, according to US government figures. Neither did Trump make any mention of the new free trade agreement, known as the USMCA, which he only recently signed with the two neighboring countries to replace NAFTA and which he has repeatedly praised as a huge boost for American commerce.

Read more: Nuns get hands dirty, and wet, to save Mexico salamander

In Mexico, President Andres Manuel Lopez Obrador sidestepped Trump’s threat, telling journalists: “We don’t want to be imprudent and we don’t think we should get into this.”

Trump wants $5 billion in funding for a wall along the more than 2,000-mile border, which he says is currently too porous to stop illegal immigration and which he claims has become a magnet for criminals, drugs and even terrorists. Opponents — especially in the Democratic party but also some in Trump’s Republican party — say that a physical wall is impractical and that the idea is being used as a political tool to whip up xenophobia in Trump’s right-wing voter base.

Trump said he would then take US-Mexican relations back to the days before the NAFTA agreement opened free trade across Canada, Mexico and the United States.

Both sides have dug in. Democrats refuse to approve funding and the president — who has made hardline immigration policies a centerpiece of his presidency — has retaliated by refusing to sign off on a wider spending bill, leaving some 800,000 federal employees without pay. Negotiations on lifting that partial government shutdown, perhaps by providing some border security funding, have sputtered out and no new debate is scheduled before next Wednesday.

The president, who had already scrapped a Christmas visit to his Florida golf resort, has also “canceled his plans for New Year’s,” his incoming chief of staff, Mick Mulvaney, said on Fox News. Asked about the startling rhetoric, Mulvaney told Fox that Trump “is trying to draw light to the fact this is a crazy discussion to be having.”

For one Republican Congress member, Brad Wenstrup, the paralysis over the wall reflected “a lot of political posturing.” “I would hope that it could be ended soon,” he told CNN television. “If you sit down and talk about that, why is that such a hard thing to do?”

Experts are divided on solutions to policing the long, often inhospitable border separating the world’s biggest economy from the far poorer countries to its south. Although there is a huge cross-border drug trade and immigrants often enter illegally, others have genuine claims for asylum. Central Americans are also deeply integrated in the US economy, often performing physically demanding, low-pay jobs in construction, agriculture and other vital sectors.

Trump’s Republican party — say that a physical wall is impractical and that the idea is being used as a political tool to whip up xenophobia in Trump’s right-wing voter base.

Trump has consistently painted the asylum seekers and economic migrants in outlandish terms, raising the specter of rapists, gang members and people with infectious diseases roaming freely across the border. Trump has latched particularly on to what have become known as the “caravans” — groups of several hundred or even more migrants who make epic treks across Central America and Mexico to try to reach the United States.

According to Trump, the “caravans” amount to organized attempts at invading the United States. In one tweet Friday, Trump warned: “word is that a new Caravan is forming in Honduras and they are doing nothing about it.” As a result, he said, “we will be cutting off all aid” to El Salvador, Guatemala and Honduras.

The impoverished, often dangerous countries have long received American assistance to boost democracy, human rights, education and security. But according to State Department figures, the aid is already dropping steeply.