Trump stays confident in US trade deal with China 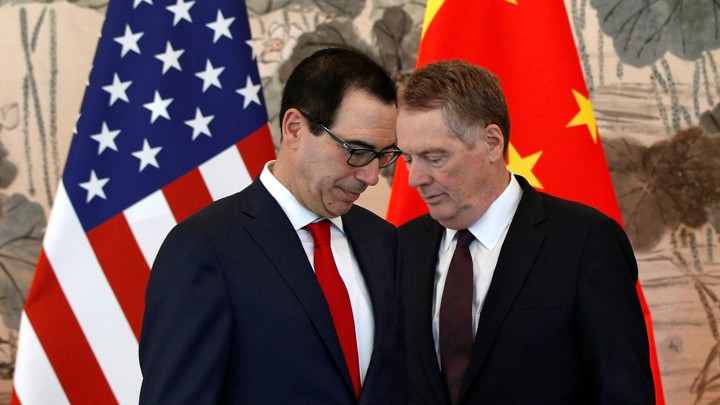 President Donald Trump said Friday he is confident Washington and Beijing will reach a deal to bring to a close the months-long trade dispute that has roiled global financial markets.

“I think we will make a deal with China,” Trump said at the White House, and noted that talks are underway with China “at the highest levels.” With the Chinese economy slowing, “I really think they want to” reach an agreement, he told reporters. “I think they sort of have to.”

A US delegation is due to travel to Beijing to hold negotiations Monday, but Trump said he and Chinese leader Xi Jinping already have been actively engaged in the talks.

Deputy US Trade Representative Jeffrey Gerrish is due lead the team to China for the first face-to-face discussions, which will include officials from the Treasury.

“We have a massive trade negotiation going on with China. President Xi is very much involved, so am I. We’re dealing at the highest levels and we’re doing very well,” he said.

Trump and Xi agreed to a three-month cease-fire after imposing steep tariffs on hundreds of billions of dollars in two-way trade, which has raised fears of slowing economic growth and added to investor jitters worldwide.

Trump repeated that the US has “taken in billions and billions of dollars in tariffs from China and from others,” despite the fact import duties are increasing costs for American businesses and consumers.

The New York Federal Reserve bank said in an analysis Friday that “higher import tariffs had immediate impacts on US domestic prices,” raising the consumer and producer prices by 0.3 percentage points higher than they would otherwise have been.

With the Chinese economy slowing, “I really think they want to” reach an agreement, he told reporters. “I think they sort of have to.”

Deputy US Trade Representative Jeffrey Gerrish is due lead the team to China for the first face-to-face discussions, which will include officials from the Treasury, Commerce and Agriculture departments as well.

The bruising trade war comes as China grapples with a slowing domestic economy. Growth is expected by the government to have eased to around 6.5 percent in 2018, down from 6.9 percent in 2017.

The manufacturing sectors in both countries have been hit by the trade dispute, and Apple shares dropped sharply after reporting steeper-than-expected “economic deceleration” in the last quarter in China — one of its largest overseas markets.

Trump said he has urged Apple chief Tim Cook to “make your product in the United States” rather than China.

Xinjiang: Where its a crime to practice Islam